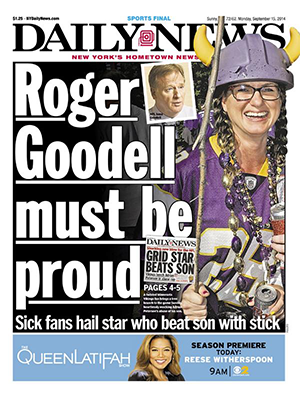 If you watched what we’ll refer to as “the game” between New England and the Vikings yesterday, you may have noticed whose picture was not on the side of the team’s new billion dollar play palace in the artist’s rendering CBS showed their viewing audience.

In Adrian Peterson news: ESPN has a story up saying, “Minnesota Vikings executive vice president and general manager Rick Spielman said Sunday that ‘all options are on the table’ when it comes to how the team will handle the allegations against running back Adrian Peterson.”

Chris Wessling at NFL.com reports, “NFL Media Insider Ian Rapoport reports, via a Vikings source, that the length of Peterson’s absence could be longer than this week based on what new information the organization uncovers about the running back’s charge of reckless or negligent injury to a child. … Spielman told NFL Media’s Andrea Kremer on Saturday that the team’s approach is ‘literally one hour at a time.’ The Vikings don’t know yet if more pictures or videos will be forthcoming. One other member of the organization confirmed to Kremer that the ‘current climate’ created by Ray Rice’s indefinite suspension for striking his then-fiancee in an elevator certainly factored into the decision to deactivate Peterson for Sunday’s game. Asked by Kremer if the discipline might include a team suspension or even Peterson’s release, Spielman said all of the facts need to be in line before those decisions are made.”

At USA Today, Chris Chase writes, “Charles Barkley defended Adrian Peterson and expressed hope that Ray Rice gets another chance to play in the NFL during a Sunday interview with Jim Rome on the CBS pregame show The NFL Today. After expressing optimism that the ‘tragic mistake’ made by Ray Rice will help raise awareness of domestic violence, the outspoken NBA Hall of Famer was asked about the indictment of Peterson. Barkley said he understands the anger toward the Minnesota Vikings running back but said ‘every black parent in the south is going to be in jail’ under the circumstances that led to Peterson’s indictment on child abuse charges.”

In the New York Daily News, Tina Moore says, “Adrian Peterson could get up to two years in prison if prosecutors successfully argue that the bloody beating of his 4-year-old son went above and beyond normal discipline. And barring a plea deal, the star running back’s trial would likely begin early next year.”

Elsewhere in the same paper, veteran sportswriter Mike Lupica says, “By now you know some of the details of Peterson’s own life apart from football, a father who ended up in prison for selling crack cocaine, a brother killed by a drunken driver, another half-brother shot and killed. All of it may inform the man the child became, but does not excuse the kind of behavior, against his own child, for which he now stands accused, even as his lawyer tells us all what a loving father Peterson is.”

Ex-Viking great Cris Carter had his say on ESPN Sunday. Roxanna Scott at USA Today says, “Carter related the story to his mother, who raised seven children by herself. ‘My mom did the best that she could do … But there are thousands of things that I have learned since then that my mom was wrong. This is the 21st century; my mom was wrong… And I promise my kids I won’t teach that mess to them. You can’t beat a kid to make them do what you want them to do.’ As Ray Lewis, Tom Jackson and Mike Ditka listened intently in the studio, Carter got increasingly emotional and his voice became passionate. ‘The only thing I’m proud about is the team that I played for they did the right thing,’ he said of the Vikings.”

At The Sporting News, Troy Machir quotes New York Post writer Bart Hubbuch saying that the Vikings were scheduling a conference call last night and the possibility of trading Peterson was on the table. “The idea of a team trading away one of the best players in the NFL due to the player’s first off-the-field incident seems like a gross overreaction, but social indiscretions are viewed is a much different prism than marijuana use. That being said, he has yet to be convicted on any charges, and that will play a big part in the team’s decision.”

In other news: Fortune magazine’s Allan Sloan took another rip at Medtronic-style tax inversion. “A high-bracket Minnesota resident who has owned shares of Minneapolis-based Medtronic for 20 years would have to pay about $20 a share in federal and state tax if the company inverts at current prices. But such taxes don’t affect mutual fund and hedge fund managers, who are judged on pretax performance and who pass on tax obligations to their investors. ‘It’s one thing for investors to have to pay tax if a fund manager is selling a stock at a profit, but it’s a whole other thing to have to pay on a stock the fund is keeping,’ says Daniel P. Wiener, editor of a newsletter for Vanguard investors. The same, of course, is true for people who own stock directly. Once again, Wall Street gets its way, while responsible Main Street folks get screwed.” Why it’s almost like the hedgies wrote those tax laws.

The latest Minnesota Poll has Mark Dayton with a 12-point lead over Jeff Johnson in the race for governor. The Strib’s Patrick Condon says, “Dayton leads Johnson 45 percent to 33 percent, with 20 percent undecided. The poll found that Johnson, a Hennepin County commissioner from Plymouth and former state legislator, is still a mystery to many: At least a third of likely voters did not recognize his name, while another 40 percent had no opinion of him.”

Here’s The Current’s Andrea Swensson on The Replacements Midway Stadium show Saturday night. “In a performance that spanned nearly every song they’ve pulled out for their reunion gigs so far and a few that haven’t (including ‘Take Me Down the Hospital’, Jimmy Reed’s ‘I’m Going to New York’ and a spine-tingling solo rendition of ‘Skyway’), the Replacements seemed hell bent on erasing any ill will that might have arisen from such a delayed hometown show and finally gave the audience exactly what they wanted.”