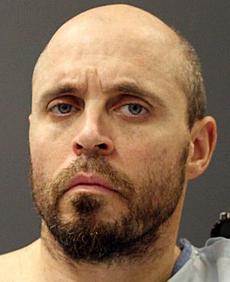 Courtesy of the Minnesota Dept. of Corrections
Brian Fitch, Sr.

He could at least spare us the cost of a trial. The AP says, “The man accused of killing a Mendota Heights police officer has pleaded not guilty to charges. Attorneys for Brian Fitch, Sr. entered the pleas during a hearing Monday in Dakota County District Court. Fitch’s lawyers are asking that the defendant’s trial be moved out of the Twin Cities because of extensive publicity about the case. The defense also wants statements he made while hospitalized suppressed.” Yeah, the part where he says he did it could make acquittal kind of tough.

For you debt-o-phobes, a handy chart on Midwest states and their use of municipal bonding over the last 10 years,  from the Strib’s Adam Belz. “The national trend for muni bonding is still downward though, as is the trend in much of the Midwest.”

I know someone who‘s going to get tracked down and fined. MPR’s Bob Collins has video of yet another big rig truck blowing past a stopped school bus. “Note that the truck is driving in the breakdown lane, inches from where the people were standing.”

Clearly not your classic accident. Says Stribber Paul Walsh, “A woman on Hennepin Avenue in downtown Minneapolis was run over on purpose and dragged by a driver over the weekend, leaving the victim in a coma and a woman in jail, authorities said. … Jailed on suspicion of assault with a dangerous weapon was Vanessa I. Uzong, 24, of Brooklyn Park. Police say Uzong admitted to police officers at the scene that she was the driver. She has yet to be charged. Two witnesses told police that Uzong aimed her car ‘right at [Miera Horton] and veered toward’ the victim even as she tried to get out of harm’s way. Horton was ‘struck … and dragged,’ according to a police report. Uzong then rammed a vehicle from behind, the report read.” Probably for good measure.

More like a Stephen King novel all the time. Walsh (again) writes, “Human remains discovered last week during an improvement project at a lakeside home in east-central Minnesota are most likely from a historical burial site, authorities said Monday. … a statement from the Sheriff’s Office read, ‘but all parties agree that reinterment will follow cultural guidelines’. Authorities have yet to disclose which culture was being referenced.”

What would you say defines ‘middle class’? The Strib’s Ricardo Lopez writes, “Republican gubernatorial candidate Jeff Johnson on Sunday proclaimed he’ll be a champion of Minnesota’s middle class, but stumbled when asked how to define them. … A 2013 Wall Street Journal/NBC News Poll found that nine in 10 Americans believe the top threshold for middle class are families with a total income of $100,000. The tendency, according to this poll, is Americans more often than not believe their own income brackets to be considered middle class.”

Not a shocker. DFLer Steve Simon gets the Strib’s nod for Secretary of State. “Steve Simon, who represents portions of St. Louis Park and Hopkins in the Legislature, is uniquely well suited to succeed Secretary of State Mark Ritchie, who is not seeking a third term. Simon, like Ritchie, is a DFLer. But he has built bipartisan consensus to increase voter participation. As chair of the House Elections Committee, Simon was instrumental in passing the ‘no excuses’ absentee voter law, which starting this election makes it easier for Minnesota voters to cast a ballot, as well as the bill allowing online voter registration.”

FYI astronomical phenomena fans. Says Paul Huttner at MPR, “The ‘blood moon’ total lunar eclipse dazzled onlookers in the early morning sky on Oct. 8. A second  eclipse this month will put on a sky show over most of North America Thursday. This one is a partial solar eclipse, and a rare sunset eclipse for Minnesota and the Mississippi Valley.”

Couldn’t find the brakes, apparently. For the PiPress, Mara Gottfried reports, “Police cited a 36-year-old woman for driving while impaired after they say she crashed into a St. Paul fire station on Friday night. … Montoya posted a photo of the crash scene on Facebook soon after it happened, writing, ‘My current situation!! (Expletive) cut me off!’ She said Monday that was the main reason for the crash.”