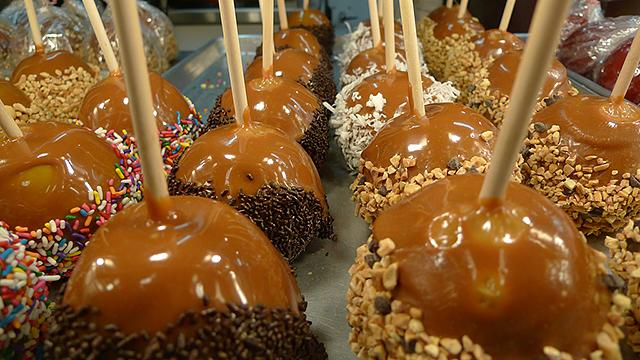 Clearing a path for something. Patrick Condon of the Strib reports, “State House Republicans have yanked Rep. Jean Wagenius, a Minneapolis DFLer and longtime ally of environmentalists, from her longstanding spot as lead House Democrat on the committee that oversees state spending on environment and natural resources. … A spokesman for House Democrats said when the caucus submitted its committee wishlists to incoming Republican Speaker Kurt Daudt, that it was made clear Wagenius was the party’s choice to be the top DFLer on what will now be called the Environment and Natural Resources Policy and Finance Committee. Instead, she was excluded from the committee altogether.”

Beware the caramel apples! Nicole Norfleet of the Strib says, “State health officials warned residents Thursday night about a multistate outbreak of listeriosis linked to eating caramel apples that has led to the deaths of two people in Minnesota. Four people in the state have become ill and had to be hospitalized as part of the outbreak, according to a release by the Minnesota Department of Health. All victims were adults ages 59 to 90 years and had gotten sick in late October and November. Consumers who may have purchased pre-packaged, commercially produced caramel apples, including caramel apples with other toppings such as nuts, chocolate and sprinkles, are warned not to eat them until more information becomes available.”

From KEPR-TV in Washington state, Kathleen Jacob reports, “KEPR is learning more about a young man from Kennewick who was killed by police on a Minnesota freeway. Friends of Johnathon Mar are still in shock at the turn of events. … Katelyn Lingle couldn’t believe the words she read on Facebook Wednesday night. ‘I read it and I was like, seriously? Like is this some sick joke? Are you kidding’?”

Another upgrade in the Vikings’ football palace. Tim Nelson at MPR writes, “The Minnesota Vikings are upgrading the lights in their new stadium to LED, saving money and energy in the new building. The LED lights will replace the traditional metal halide and other lamps that were originally planned for the stadium. The Minnesota Sports Facilities Authority says the $1.2 million in extra construction costs will be repaid by energy savings, expected to be $300,000 a year.” All the better to see your personally licensed seat.

Nice photo essay of Duluth’s Bentleyville light extravaganza by Derek Montgomery for MPR. “Billed as America’s largest free walk-through lighting display, Bentleyville is one big Christmas lights show in the Bayfront Festival Park in Duluth. What began as Nathan Bentley’s home light display in Esko, Minnesota, grew so large that the city of Duluth offered to host it on the waterfront.”

Also up north, more on the UMD’s women’s hockey coach. The AP is saying, “Supporters of Shannon Miller and the rest of the Minnesota Duluth women’s hockey staff want them reinstated. Miller coached UMD to five NCAA national championships. But the university decided not to renew her contract after this season. Athletic director Josh Berlo cited budget reasons in the announcement Monday. The school faces a $4.5 million deficit, and he says it can’t afford the highest-paid coach in women’s hockey. Her base salary is $215,000.”

Also saying good-bye: the Blaine velodrome. The AP says, “The board that oversees the National Sports Center in Blaine has voted down a proposal to authorize repairs for the aging, sharply banked wooden outdoor track. But board members indicated at Thursday night’s meeting that they would be receptive if an outside funding source could be found. New estimates put the repair costs at about $75,000.”

Just when we thought we could look down our noses at Wisconsin, something like this makes the news. Says Chao Xiong in the Strib, “An allegedly intoxicated Maplewood woman passed out on top of her toddler inside her home while leaving an infant strapped to a stroller outside, according to court documents. … A neighbor called police to the 1300 block of Skillman Avenue in Maplewood about 2:40 p.m. that Sunday because an infant strapped to a stroller was left in the driveway. The child was seven months old. Police found the storm door to the home closed, but the inside door open. As the neighbor watched the infant, an officer entered the home, finding Rangel unconscious on top of her 19-month-old child, the complaint said.”

Also in the Strib, Colin Covert talks with Minnesotan Cheryl Strayed and producer Bill Pohlad about the film version of Strayed’s memoir, “Wild.” “[Reese] Witherspoon, who also co-produced this year’s drama ‘Gone Girl,’ spent an hour talking to Strayed about her film ideas. Hollywood is not overflowing with projects for 30-plus women, and Witherspoon told Strayed ‘she really wanted to play the role and wanted to option the book’. ‘I’m from northern Minnesota, where there’s no pretension. What you see’s what you get,’ said Strayed, who grew up in Aitkin County. ‘I was looking for that in an actress, too. Reese was quite an authentic person. She didn’t believe her movie-star press. This real, hardworking person, I sensed that I would like her and identify with her. I was right about that. She’s as real as it gets.’”

Keeping an eye on how money talks, Cory Zurowski at City Pages writes, “Minnetonka-based Cargill, Inc., America’s largest privately held corporation, has pocketed more than $1 billion in federal business as a result of its political pull. The Sunlight Foundation, a Washington, D.C. money-in-politics watchdog group, found that Cargill invested almost $10 million in campaign contributions and lobbying between 2007 and 2012, making it one of the Top 200 sugar daddies on Capitol Hill. Its generosity, quite naturally, didn’t go unnoticed.” And if you have a problem with that, get your own $10 million.