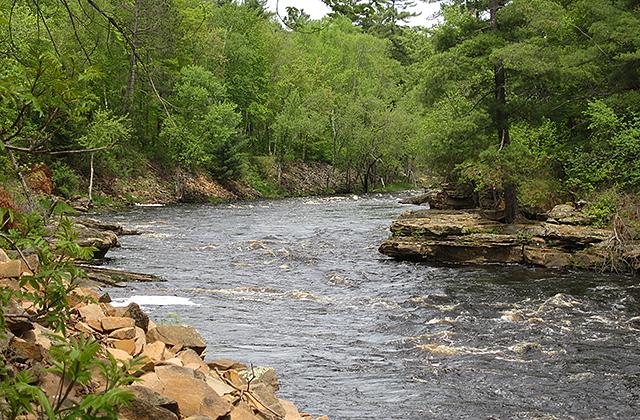 The Strib’s Josephine Marcotty wades into the cauldron of conflicts over how to use Legacy money to clean up farm chemical run-off. “In January, Minnesota’s top agriculture and environmental leaders gathered at a triumphant news conference to announce a $9 million federal grant for a novel project to help farmers protect streams and rivers from the chemicals that come off their land. A one-year trial had been a resounding success, Agriculture Commissioner Dave Frederickson announced. The federal money, combined with another $11 million from the state, would finance a full-scale launch. It would make Minnesota a national leader in showing how farmers will step up to solve one of the country’s most grievous environmental problems — agricultural water pollution. But a growing chorus of critics is saying not so fast.”

Please don’t compare us to North Dakota. Stribber Beena Raghavendran says, “In Moorhead, to qualify for government cash assistance, residents must have lower incomes than people living right next door in Fargo, N.D. This discrepancy upsets U.S. Rep. Collin Peterson, a Democrat whose Seventh Congressional District includes Moorhead. Some Minnesota residents make slightly too much to receive benefits by Minnesota law while their counterparts making the same income across the state line are getting help. It’s a problem echoed across the country because states set their own cash benefit standards.”

Speaking of NoDak, Sharon Cohen of the AP has a story of a former sex worker trying to help girls in the oil patch. “[Windie] Lazenko is now one of the most prominent activists in the fight against sex trafficking in the oil patch. She’s worked with federal prosecutors, the FBI and police, testified before state lawmakers and addressed church and school groups. She also has formed an advocacy-resource group, 4her North Dakota, reaching out to victimized women.”

In a Strib commentary local writer Wayne Nealis says, “The Mall of America has a big day in court on Tuesday. Organizers indicted for their role in the Dec. 20 Black Lives Matter protest will appear that morning in Hennepin County District Court. And with that, a public trial will begin examining the conduct of the mall and Bloomington law enforcement surrounding the protest. Unless, of course, the city decides to take the high road suggested here, and drop the charges. … While such precedents might technically say the mall is private property with all the rights associated, it is in practice as public as downtown streets.”

And on the latest incident of police shooting a young unarmed black man, this time in Madison, Wisconsin, the AP reports, “[Officer Matt] Kenny, who had more than 12 years with the Madison department, also shot and killed a suspect in 2007, but was cleared of wrongdoing because it was a ‘suicide by cop-type’ situation, Koval said. Kenny has been placed on administrative leave pending results of an investigation by the state’s Division of Criminal Investigation. A 2014 Wisconsin law requires police departments to have outside agencies investigate officer-involved deaths after three high-profile incidents within a decade — including one in Madison — didn’t result in criminal charges, raising questions from the victims’ families about the integrity of investigations.”

On that Lakeville food truck explosion, Pat Pheifer of the Strib says, “The cause of a food truck explosion late Friday in Lakeville remains unknown, the truck’s owner said Sunday. ‘I gotta find out what happened,’ Marty Richie said. ‘I gotta.’ … John C. Levy, president of the Minnesota Food Truck Association, said such incidents are ‘amazingly rare.’ The last one he knew of was in Philadelphia last summer when the grills on a food truck ignited propane vapor leaking from an unused tank. Two people died in that blast.”

You’ve followed the enormous budget deficit over in “It’s Working” Land? And also the gutting of the state’s park system budget? Cory Zurowski of City Pages writes, “Wisconsin’s 46 state parks, 14 state trails, four recreational areas, and two national scenic trails, could end up resorting to corporate sponsorships in order to pay the bills. Walker’s recent biennial budget proposal axes almost a third of the parks’ $16.7 million operating budget. As a result, state parks would be forced to operate mainly on revenue from fees. Other casualties of Walker’s plan would be a 13-year freeze on land conservation purchases and the state Department of Natural Resource’s policy-making citizens’ board would be stripped of any meaningful authority to act in the system’s best interests.”

He’s “Mr. Hockey.” Tim Leighton at the PiPress says, “The Minnesota high school boys hockey season came to a close Sunday afternoon with the distributing of the two highest individual honors for a senior player. Elk River’s Jake Jaremko was selected the winner of the Mr. Hockey Award during a banquet at St. Paul’s RiverCentre. The award is presented by the Minnesota Wild and the Minnesota Minute Men. Jaremko scored 25 goals and assisted on 54 in leading the Elks to a runner-up finish in the Section 7AA tournament. He has committed to play at Minnesota State Mankato.”

A nice portfolio of photos from the tournament by Angela Jimenez for MPR.