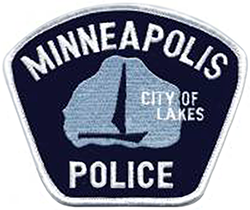 Reports from Wednesday evening’s downtown Minneapolis protest against the decision of the Dane County District Attorney not to bring charges against a police officer who shot and killed a young man in Madison earlier this year are not very clear at this point, but at some point — for some reason — Minneapolis police started spraying the crowd with “irritant.” The Star Tribune’s Liz Sawyer sheds a little light:  “Between 50 and 100 activists closed down two blocks of downtown Minneapolis Wednesday night before marching to Hennepin County Government Center to protest the March shooting death of biracial youth Tony Robinson by a white police officer in Madison, Wis. … Many protesters in Minneapolis could be seen dousing their eyes with milk in an attempt to counteract the effect of chemical mace being sprayed. A 11-second video posted on Twitter apparently showing an Minneapolis officer spraying a chemical into a bandana-wearing protester’s face quickly went viral. …”

You can watch a video of the march on Nekima Levy-Pounds’ Star Tribune blog. Levy-Pounds blog also raises the news that “… a ten year old boy was pepper sprayed by a Minneapolis police officer during a march through downtown.”

Final Exit found guilty. The AP (via KSTP) reports: “The national right-to-die group Final Exit Network Inc. was convicted Thursday of assisting in the suicide of a Minnesota woman who took her life in 2007 after years of suffering with chronic pain. … Jurors also found the group guilty of a lesser charge of interfering with a death scene. The group faces a maximum fine of $33,000. Sentencing has been set for August. … Prosecutors argued at trial that [Doreen] Dunn didn’t know how to take her life until agents of Final Exit Network provided her with a ‘blueprint’ to do so.”

Home Depot: if we can’t have you, Cottage Grove, no one can. The Pioneer Press’ Bob Shaw reports: “Cottage Grove Mayor Myron Bailey is lashing out at Home Depot — the company he says is crippling city development for the next 15 years. … He said that after leaving the building empty for seven years, Home Depot is demanding a ban on neighboring businesses that sell anything it sells. … Even though the city would own the property, it would have to agree to keep any Home Depot competition out of the entire mall for 15 years.”

A St. Paul executive is missing after Tuesday’s Amtrak crash in Philadelphia. “An Ecolab vice president based in St. Paul is among the passengers unaccounted for after the deadly derailment of an Amtrak train Tuesday night in Pennsylvania,” say the Pioneer Press and AP. “Bob Gildersleeve, vice president of corporate accounts for Ecolab’s institutional business, had a ticket for the train, his father told the Associated Press, and relatives have been unable to get information from Amtrak on his whereabouts.” UPDATE: Minneapolis/St. Paul Business Journal reports that Gildersleeve was killed in the crash.

Pioneer Press parent company Digital First Media is no longer for sale, apparently. Romenesko has the memo. UPDATE: Capital New York’s Ken Doctor has a more detailed post, suggesting that DFM may be looking to sell off its papers in clusters, rather than selling the whole company to one buyer.

Atheists can now perform weddings in Washington County. Is that brimstone we smell? [MPR’s NewsCut]

Starting this summer, you’ll be able to get the heck out of Wisconsin a lot faster. [AP via KARE]

There is only one stoplight in Dodge County [Rochester Post Bulletin]