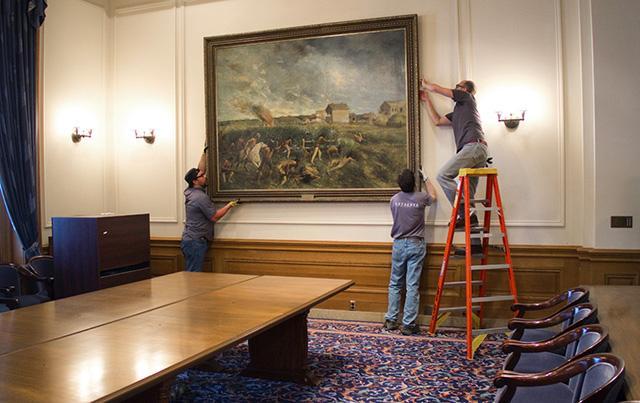 Maybe they thought this was how to deliver service to rural Minnesota? Brian Bakst of the AP reports, “In restoring Minnesota’s Capitol to its old glory, renovators planned to spend $4.5 million on furniture and decorative finishing touches on the inside. That was until House Republicans quietly pushed to bump up the furnishings allocation by $2 million, or 45 percent. According to interviews and internal Department of Administration documents reviewed by the Associated Press, the extra money is intended to accommodate historically compatible furniture in more spaces, higher-end upholstery, refinished hardwood flooring rather than carpet in leadership offices and even a $10,000 door on the House speaker’s Capitol suite.” I assume that door leads to the Taj MaSenate Office Building?

So if the IRS wants another $1,000 from me I should be able to negotiate that down to around $160? In the Strib, David Phelps writes, “A $255.8 million government claim on the estate of the late billionaire banker Carl Pohlad has been quietly settled for a fraction of the initial amount the Internal Revenue Service demanded. The Pohlad family resolved the IRS case for $36 million, including a penalty of $1.8 million and interest of $5.3 million, according to documents filed in U.S. Tax Court earlier this summer. The settlement appears to validate the family’s contention for the past two years that the IRS greatly overvalued Carl Pohlad’s interest in the Minnesota Twins. Before his death in 2009, he had transferred the bulk of ownership to his three sons.” Making those holdings worth far, far less. Right?

In the highly unlikely chance the soon-to-be-Super Bowl champion Minnesota Vikings don’t win it all this year, we’ll at least have this to look forward to. Nick Paglino at Wrestlezone.com says, “Lester Bagley, The Vice President of Public Affairs for the Minnesota Vikings, recently spoke about the new $1 billion US Bank Stadium being built for the Vikings. During the video, which you can watch at this link, Bagley had the following to say: ‘Before the building is even open, we have already secured the Super Bowl in 2018, the NCAA basketball Final Four in 2019. We are a finalist and seem to be in a very good position to secure the college football playoffs, the BCS Championship game and you know we’ve got WrestleMania coming.’ WrestleMania 32 has already been announced to be taking place in Dallas, TX this year, so the earliest Minnesota could be hosting the event is in 2017, for WrestleMania 33.” My personal seat license will get me up real close, I’m thinking.

Back to stay. The AP says, “The caskets of eight family members will be lined up inside a church in a small Minnesota community, far from the Texas home where they were killed. The victims, including six children, will be buried in La Crescent, a city of about 5,000 along the banks of the Mississippi River. A funeral service at United Methodist Church is scheduled for Thursday afternoon. Pastor Gregg Nelson says the family from Houston will be buried in La Crescent because the last surviving sibling lives there.”

It is true Lynyrd Skynyrd will be at the state fair. By pure coincidence Jon Collins of MPR tells us, “A Minnesota-based group has been given the go-ahead to hold a rally in support of the controversial Confederate battle flag on the Minnesota Capitol mall next month. The group calling itself ‘Minnesota 10,000 for Southern Heritage’ plans to hold the rally on the morning of Sept. 5. ‘[W]e feel this flag should be allowed to fly and seen as an image of heritage,’ according to the group’s application. ‘We do not condone violence, hate, bigotry, racism, etc. for those choosing to use our flag to promote their delinquencies because of its popularity.’” But if any of that happens, well, they’re just havin’ fun.

Have I mentioned that I live in Edina? WCCO-TV picks up on the annual Newsweek survey of the country’s best high schools. “Newsweek Magazine has released its top 500 high schools in the country for 2015, and 10 from Minnesota made the list. Of those 10, one was able to crack the top 100. Newsweek bases its school rankings on a range of data on those that prepare their students the best for college. The rankings include a college readiness score, graduation rate, percentage of students that attend college and that community’s poverty ranking. Based on the rankings, Edina High School is the best in Minnesota and ranks No. 71 nationally. It had a college readiness score 85.5 and a graduation rate of 99.8 percent. More than 93 percent of graduates move onto college.” And no, it is not true that freshmen study abroad, preferably in Paris, for the spring quarter.

An options trader accused of tax evasion and fraud? Has the whole world gone mad? Says Stribber Dan Browning, “A Twin Cities options trader and author who’s been leading courses from his home on how to get investment returns exceeding 150 percent a year is under criminal investigation by the IRS for allegedly evading nearly $350,000 in income taxes and filing false returns. John D. Ondercin, 45, of Mound, hopes to work out a civil settlement and avoid criminal charges, his lawyer said. He said Ondercin was a ‘true believer’ in what turned out to be an illegal tax-avoidance scheme that he learned at an investment seminar promoted nationwide by Roderick Prescott, of Orem, Utah.” Something tells me he’s one of those “Constitutional scholars,” too.

Also in stunning news, First Avenue needs a lot more work than first thought. Andrea Swensson of The Current says, “Though the club had initially hoped to reopen its Mainroom this weekend, general manager Nate Kranz just confirmed that they won’t be ready to host any events quite yet. ‘Unfortunately we got a bad review from the inspection,’ Kranz said today. ‘We had an engineer come out and we were done with the work we expected to have to do, but they wanted to look at the rest of the ceiling, and unfortunately they didn’t like what they saw so we’re going to stay closed’.” I sure hope they get it back together by Fair time, so the Skynyrd boys can stop by and jam with Lizzo or Brother Ali.