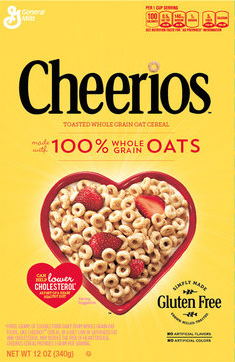 Apparently they tried. Tess Stynes in The Wall Street Journal says, “General Mills Inc. is recalling 1.8 million boxes of Cheerios because wheat flour was inadvertently added to cereal labeled gluten-free, a gaffe that illustrates the challenges for big companies adjusting to new consumer demands. The recall, which represents less than 1% of annual sales volume for Cheerios, comes after General Mills trumpeted in February that it would start making five varieties of the storied brand, including the original flavor and its better-selling Honey Nut Cheerios, without gluten. The Minneapolis food maker said the new boxes began appearing on shelves in late July.”

The revolution is being televised. The AP says, “A Minnesota police department is investigating after a video surfaced that appears to show an officer pushing and striking a teen. The incident happened Saturday night. Nineteen-year-old Kamal Gelle says he was pulled over and given a citation for careless driving. Gelle says he then got out of his car to talk on his phone. He says that’s when the officer pushed him and hit him in the side of his head.”

Alert! Designer pizza coming soon to Edina. Says Clare Kennedy for The Business Journal, “Casual pizza and pasta restaurant Z Italiano is under construction in the southwest corner of Edina’s Southdale Center near the AMC Southdale 16. Z Italiano owner Zach Saueressig said the 5,000-square-foot space has been vacant since California Pizza Kitchen left Minnesota in 2012. ‘It’s a new concept but it should be familiar to people,’ Saueressig said.’ I think that’s safe to say.

But can we ever be quite as Gothic as anything set in New Orleans? The Forum News Service folks report, “Northern Minnesota could be the setting of a crime-drama television series based on a trilogy of books by Norwegian novelist Vidar Sundstol. The entertainment newspaper Variety reports that ‘Minnesota’ would revolve around the murder of a Norwegian tourist who turns up on the shores of Lake Superior in a case with links to a crime dating back 100 years.”

This one does kind of quack like a duck. Dan Gunderson at MPR says, “The White Earth Band of Ojibwe had a deal lined up last year to buy 2,000 acres of forest, grassland and water west of Itasca State Park using a $2 million Minnesota Legacy Amendment grant. Using Legacy money seemed to make sense. The funds are meant to be used partly to protect Minnesota wetlands and wildlife habitat. The band intended to keep the land undeveloped. The Lessard-Sams Outdoor Heritage Council, which reviews and recommends Legacy spending, backed the deal. State lawmakers, however, killed it. A House committee stripped the project from the bill. Rep. Steve Green, R-Fosston, sponsor of the amendment to remove the project, said the land sale would hurt Clearwater County by taking land off the property tax rolls. White Earth is trying to revive the plan now. … Race is the ‘elephant in the room,’ said White Earth Land Acquisition manager Lorena Vogt.”

What about those premiums again? Matt Sepic at MPR says, “UnitedHealth Group will be making a big hiring push in Minnesota. UnitedHealth, the nation’s largest health insurer, said Monday it plans to hire about 1,700 employees over the next six months in the Twin Cities. The company says it hopes to fill a variety of positions, including finance, sales, marketing, and information technology, and is also posting more than 1,000 telecommuting jobs.”

Speaking of premiums, the Forum News Service says, “An independent study shows Minnesota’s nation-leading health insurance premium increases are not as bad as they appear at first glance. Kaiser Family Foundation, well known for studying health issues, released a report that indicates Minneapolis insurance premiums will soar more than 28 percent next year, but the increase was less than half that after federal subsidies are figured in for some insured. … The Kaiser information is taken from mid-level premiums of a 40-year-old Twin Cities man earning $30,000. He would have paid $235 a month this year, and $208 next year after the subsidies.”

They can never keep their mouth shut. A Superior Telegram story says, “A Duluth couple accused of stashing about $15,000 worth of methamphetamine under the carpet of their vehicle was bound over for arraignment last week in Douglas County Circuit Court. … While in custody at the Douglas County Jail, [Dominic] King mentioned to a friend during a video visit Sept. 25 that he had ‘nine grand’ in the rear seat of his Jeep, hidden under the carpet. Superior Police Officer Nick Eastman and his K9 partner, Marik, were called in to examine the vehicle. Marik gave a positive alert for drugs and a search warrant was granted for the Jeep, which was used by both King and [Lisa Marie] Forrestal. About 300 grams — 10½ ounces — of meth was found under the carpet of the vehicle.”

Talking about milking a demo. At KMSP-TV Courtney Godfrey reports, “The asking price for those renting out their homes in the Twin Cities west metro for the 2016 Ryder Cup at Hazeltine reaches up to $200,000. And though it’s still a year away, these houses are going fast. … ‘It’s been mostly men, they are going to spend all day at the course and they just want a nice pillow to put their head, grill a steak and smoke a cigar’, [Hazeltine member Kathy]Norton said.”

And if your barn finds a gilded renter consider getting away. Kristen Leigh Painter of the Strib says, “Delta Air Lines will begin new seasonal nonstop service between Minneapolis-St. Paul and Rome beginning next summer. The daily round-trip flight marks Delta’s fifth long-haul international destination from Minneapolis-St. Paul International Airport, one of the carrier’s largest North American hubs. Delta will open the route on May 26 and continue daily service through the peak summer months until near Labor Day.”