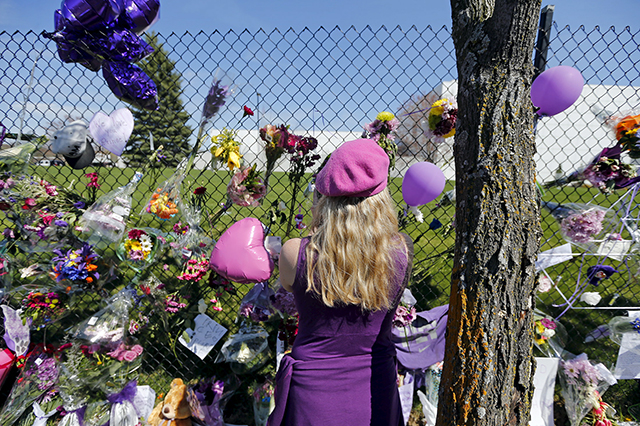 Plot. Thickening. Matt Pearce of The Los Angeles Times says, “Prince had seen a Minneapolis-area doctor on the day before he died, and that doctor was at Prince’s Paisley Park compound to deliver test results on the morning Prince was found dead, according to court records obtained by the Los Angeles Times. Michael Todd Schulenberg, who specializes in family medicine, had also seen Prince earlier in the month, on April 7. He told investigators he had prescribed medication to Prince. The singer was supposed to fill the prescription at Walgreen’s, although it is unclear if he actually did, per the warrant. … Schulenberg, whose LinkedIn profile page has now been removed from public view, no longer works for the North Memorial Healthcare system, where he was a family health care provider, said Lesa Bader, a system spokeswoman.”

On the other coast, Sheila M. Eldred and John Eligon of the New York Times say, “Dr. Schulenberg, 46, has been licensed to practice in Minnesota since 1997. He has no disciplinary history, according to state records, and there are no allegations of wrongdoing on his part. Lesa Bader, a spokeswoman for Dr. Schulenberg’s most recent employer, North Memorial Health Care, said she could not comment on Prince’s treatment because of medical privacy laws. Dr. Schulenberg worked for North Memorial when Prince was found dead but is no longer employed by the medical system. Ms. Bader said the hospital does not comment on personnel matters.”

For the Strib, Dan Browning and Jeremy Olson say, “A source with knowledge of the investigation told the Star Tribune Friday that the doctor had been treating Prince for withdrawal symptoms from opioid addiction several weeks before his death. The source said the doctor did not prescribe opioids to the megastar. … Schulenberg is not on the list maintained by the U.S. Food and Drug Administration of practitioners who can prescribe buprenorphine. [An opioid addiction-fighting drug.]  The second Minnesota physician, who has not been publicly identified, had cleared his morning calendar to evaluate Prince on the day his body was found, the source said. The appointment never took place.”

Judging by the conversations in your better roadhouses, killing a “problem wolf” is a badge of manly honor in a lot of parts up north. In the Strib, Josephine Marcotty says, “Governments often take on the job of killing problem wolves that attack livestock in order to increase public tolerance for the predators and, in theory, to reduce poaching by frustrated citizens. Turns out, it could be having the opposite effect. In what is likely to be a controversial finding, researchers from Wisconsin and Sweden have found that poaching appears to increase when governments are allowed to kill wolves.” You wouldn’t believe the number of perfectly innocent folks attacked by wolves after four or five drinks.

Let’s hear it for this young guy. Says Stribber Tim Harlow, “Flying high from being selected to be a national delegate for presidential candidate Bernie Sanders at the Eighth Congressional District convention in Duluth the night before, [Sean] Kehren was on his way to see his mother in Pine City when he saw a vehicle ahead of him drift into the ditch at 11:45 a.m. The woman, identified by the patrol as Marie Francoise Hupalo … crashed at 65 miles per hour. Kehren, 22, slammed on his brakes and sprinted to the driver’s side door. … Then he felt something warm on his legs. ‘Flames were coming from the bottom of the car, and I said, ‘we need to get you out of here,’ he recalled Tuesday.”

Rampant, unchecked, freedom-destroying socialism alert! Says Pat Kessler for WCCO-TV, “A Minnesota Senate Committee today OK’d a bill to expand family and medical leave. Many companies already voluntarily offer extended leave to families, but Minnesota would require it for certain businesses. ‘We are going to have a huge patchwork, around this state, of Minnesotans who have these kind of benefits, and Minnesotans who don’t,’ Minnesota Senate Majority Leader Tom Bakk (DFL) said. Rural lawmakers say it’s an important tool to keep workers from moving away. Family and medical leave benefits are becoming more and more common around the country. But there’s resistance in Minnesota to a bill forcing private companies to participate. For new parents, or adult children caring for seriously ill family members, it’s a significant benefit — 12 weeks of family or medical leave, which is more than many other states. ‘There [are] no states that give more than six weeks right now,’ Sen. Paul Gazelka (R-Nisswa) said. ‘And so we are moving into an area that we don’t know.’”

At this rate, they might as well consider changing the name of the town to St. Cossetta. Also in the PiPress,  from Jess Fleming, “Dave Cossetta could be content with his sprawling Italian deli, market, pasticceria and fine-dining rooftop restaurant on West Seventh Street in St. Paul. But the restaurateur and entrepreneur has one more project up his sleeve: He will expand the already bustling Cossetta Eventi catering operation by remodeling the big hangar-like building next door that currently houses the company’s catering kitchen. The building will house an event center that seats nearly 500 people for weddings, banquets and other swank ceremonies.”

Real ID: Says Rachel Stassen-Berger, “The Minnesota House is moving from requiring all Minnesotans to get federally compliant driver’s licenses and other identification to letting Minnesotans opt out of the Real ID requirements. The Republican House had initially resisted the so-called ‘two track’ option, which would allow Minnesotans to choose between a Real ID license and a standard one. The DFL Senate has developed a measure to offer Minnesotans a choice between the two.”

Here’s one to drop into your next argument over electric cars. Danny King at autoblog.com says, “Score another checkmark on the side of electric vehicles when it comes to claims of lower lifetime greenhouse-gas emissions. This time, it’s a study out of Minnesota which says that, even in worst case scenarios, the “well-to-wheels” greenhouse-gas emissions from EVs are at least 61 percent lower than emissions from gas-powered cars. That’s what the Great Plains Institute says, citing figures from Argonne National Laboratory. … Within an average car’s lifetime mileage of about 160,000 miles, an EV emits at least 46 fewer tons of greenhouse gases than conventional vehicles. To quote Deep Purple, that’s a lot of Smoke on the Water in the Land of 10,000 Lakes.”

Finally, there’s the U of M and (yet another) hunt for (yet another) Athletic Director. Joe Christensen of the Strib reports, “The University of Minnesota’s search for a new athletic director appears to be down to four semifinalists — interim AD Beth Goetz, Northern Illinois AD Sean Frazier, Penn State deputy AD Phil Esten and one undisclosed candidate — according to people familiar with the search. … [President Eric] Kaler and Turnkey Search have declined to comment until the new AD is named, and all members of the search committee signed confidentiality agreements. Multiple sources spoke to the Star Tribune for this story on the condition of anonymity, so they could remain close to the search.”

Minneapolis doctor who was treating Prince is identified