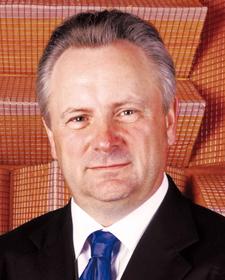 Raise your hand if this surprises you. Says Dee DePass in the Strib, “Federal prosecutors say three former Starkey Hearing Technologies executives and two of their business associates conspired to steal more than $20 million from the Eden Prairie-based hearing aid maker over a 10-year period. An indictment filed Wednesday charges ousted Starkey President Jerry Ruzicka, former chief financial officer Scott Nelson, and former head of human resources Larry Miller with embezzlement and mail fraud. It alleges that they — in concert with business associates Jeffrey Taylor and Lawrence Hagen, who also were charged — moved millions of dollars illegally through shell corporations and fraudulent payments.”

MPR’s story says: “Ruzicka ‘abused his authority as president of Starkey … to orchestrate a multi-faceted scheme to steal more than $20 million’ from the company, according to the charges. The U.S. attorney’s office also says Ruzicka stole a 2011 Jaguar by transferring the title from the company to himself. Prosecutors say Taylor, 55, of Cologne, Minn., and Hagen, 63, of Minnetonka, were both friends of Ruzicka. Taylor has worked as president of Sonion U.S., a hearing-aid component firm. Hagen worked two stints at Starkey between 1982 and 2005. Nelson allegedly exploited his post to embezzle millions of dollars from the company, and used company funds to buy a condo … .” There’ll be a boat in there somewhere, because there’s always a boat.

Vince Tuss and Karen Zamora of the Strib say, “Heavy rain across the Twin Cities on Wednesday night caused widespread flash flooding, dropping record amounts of rain exceeding 6 inches in some parts of the northern suburbs.  … The rain, falling at a rate of 3 inches per hour in some places, was accompanied by constant rolling thunder and lightning, as well as hail.”

Are you telling me this guy was high? From Zamora again: “A Minnesota Vikings superfan missed Sunday’s victory over the Green Bay Packers because he was in the Washington County jail after authorities found 134 pounds of marijuana inside his Wisconsin storage unit. Karl R. Heinrichs, who adopts the gameday persona of ‘Sir Death’ in the Viking World Order fan club, was charged Sept. 9 in St. Croix County Circuit Court … .” It has to be personal use, for glaucoma.

Who said “aggressive weed”? Steve Karnowski at the AP reports, “An aggressive southern weed called Palmer amaranth apparently has turned up in Minnesota for the first time, University of Minnesota Extension experts said Wednesday. Palmer amaranth has been spreading northward in recent years from the south, where it’s been a frustrating scourge for farmers. The weed can shoot up as high as 7 feet, and just one plant can produce 500,000 to 1 million tiny seeds.” Is it true they’re already fermenting it over in Wisconsin?

Here’s Mitch Smith of The New York Times on the latest in the St. Cloud knife attack. “since Monday, the authorities have released almost no new information about the case, frustrating some Somalis here, who are dubious of any link to the terrorist group, and are unsure why it is taking the authorities so long to release surveillance video and a more detailed narrative. ‘Right now, anyone who knows him is really, really desperate for answers’, said Mubarak Ibrahim, a St. Cloud State University student who said he had known Mr. Adan since they attended junior high school together. Mr. Ibrahim said there was ‘nothing abnormal about’ Mr. Adan, whom he saw playing basketball about two weeks ago. … St. Cloud’s police chief, William Blair Anderson, said as recently as Tuesday that no evidence had been found tying Mr. Adan to terrorist groups, adding fuel to hushed discussions in St. Cloud’s Somali grocery stores and apartment buildings about whether this was a planned terrorist attack or something altogether different.”

Could be just another door-knocking candidate for the Legislature. Ben Hooper at UPI says, “Authorities in a Minnesota city are warning residents to beware of a black bear ‘meandering in and out of yards’ in the area. The Big Lake Police Department said in a Facebook post that officers and Minnesota Department of Natural Resources personnel have received multiple reports of bear sightings in the Blacks Lake area during the past couple days.”

Says Dan Kraker for MPR, “The Fond du Lac Band of Lake Superior Chippewa plans to hold an off-reservation moose hunt across a large swath of northeast Minnesota, despite objections from the state Department of Natural Resources. In a notice posted on its website, the band said it has authorized a hunt to begin Saturday, Sept. 24, and continue through the end of the year, or until 25 bull moose are taken. Fond du Lac Chairman Kevin DuPuis could not be reached for comment. The band reached its decision ‘after careful consideration of biological data indicating the moose herd has stabilized in recent years at around 4,000 animals, and taking into account the traditions and cultural practices of the band,’ according to the website notice.”

Capitol Green. Says Erin Golden of the Strib, “One-third of the electricity used at Minnesota’s Capitol Complex will soon be powered by wind and solar farms in other parts of the state, if regulators approve a new proposal from the state and Xcel Energy. Lt. Gov Tina Smith said Wednesday that state officials intend to join an Xcel Energy program called Renewable Connect, which allows power customers to sign a long-term agreement to purchase power from renewable energy producers.”

I kinda forgot he played last year. Marc Stein at ESPN says, “Kevin Garnett and the Minnesota Timberwolves are in advanced discussions on a contract settlement that is expected to end his second stint with the team, according to league sources. The belief in Minneapolis, sources told ESPN.com, is that Garnett, at age 40, will opt for retirement after 21 seasons in the NBA. But the strongest signals Wednesday night pointed to Garnett and his representatives securing a settlement with the Wolves that will lead to his departure from the organization with one season and $8 million left on his current contract.”

A Forum News Service story says, “A teenage girl was reportedly stopped on Minnesota Highway 23 on Tuesday night by a man posing as a law enforcement officer, authorities say. The man, driving a sedan-like vehicle with red and blue lights in the grill, reportedly told the girl he had stopped her vehicle after seeing her New London-Spicer High School parking permit ‘because of homecoming activities and pranks’. … At the time of the incident, the suspect was dressed in a uniform similar to that of a sheriff’s deputy: dark-colored cargo pants, a light-colored button down short sleeved shirt with a sewn-on emblem, and a duty belt.”