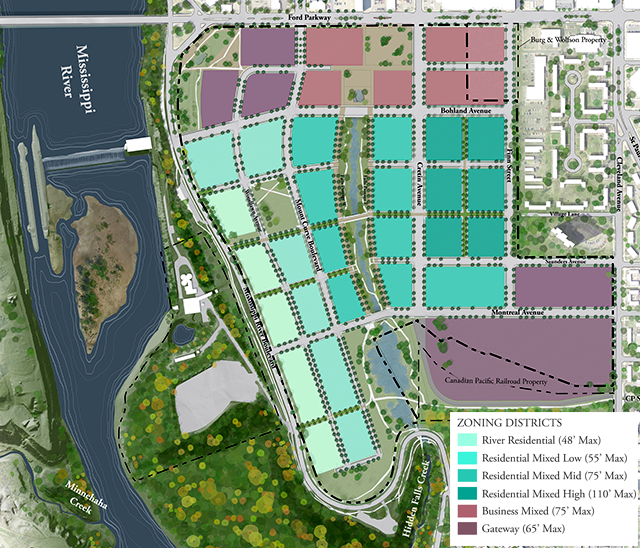 St. Paul keeps it small. The Star Tribune’s James Walsh reports: “The St. Paul City Council decided Wednesday to limit the maximum height of some buildings that could be erected on the Ford site, but the move failed to satisfy residents worried by the prospect of 7,000 people being added to a compact neighborhood. … The changes, proposed by Council Member Chris Tolbert, scale down the heights of the tallest buildings that can go on the site from 110 feet to 75 feet — from 10 stories to six — unless the developer agrees to set aside even more green space in exchange. … Tolbert said he, like most area residents, favors a mixed-use plan of housing, retail, green space and shops for the old auto plant site. He said his amendment ‘makes the plan better. I think it makes it stronger.’ … But for those worried about the scale of the development, Tolbert’s amendment offered no solutions.”

The children really are above average. MPR reports: “Scores on the ACT college entrance exam rose for Minnesota’s Class of 2017 and remain among America’s best. … For the second year in a row, Minnesota’s graduating class led the 17 states where all high school seniors took the test. In results released Thursday, they posted an average composite score of 21.5, compared with 21.1 for 2016. … Sixty-three percent met the college readiness benchmark for English, while 50 percent hit the reading benchmark, 48 percent met the math benchmark and 42 percent hit the science benchmark.”

Ruining it for all the ethical financial corporations. CNN Money’s Matt Egan reports: “President Trump and Republicans want to rip up rules on big banks. … But Wells Fargo (WFC) keeps getting into serious trouble, undermining the president’s deregulation agenda. … After creating a national firestorm last September because it created millions of fake accounts, the No. 2 U.S. bank landed in hot water again this summer. … Just in the past few months, Wells Fargo has admitted to charging thousands of customers for car insurance they didn’t need. It has been accused of ripping off vulnerable mom-and-pop businesses on credit card fees. Worse yet, Wells Fargo said last week that it uncovered as many as 1.4 million more fake accounts by digging deeper into its broken culture.”

This could be big. The Rochester Post-Bulletin’s Brett Boese reports: “A prominent Mayo Clinic doctor has stepped forward as a potential whistleblower in a move that could breathe new life into concerns about possible antitrust violations at the Albert Lea site. … Dr. Matthew Kumar, a 25-year Mayo veteran who chairs the Department of Anesthesiology at Mayo Clinic Health System in Albert Lea and Austin, recently informed Freeborn County Attorney David Walker that he’s filed four antitrust complaints against his employer since 2015.”