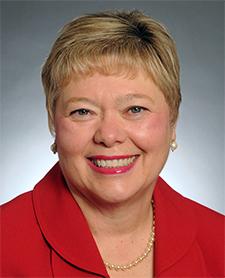 Opening coming up on the Hennepin County board. The Star Tribune’s Richard Sennott reports: “Hennepin County Commissioner Linda Higgins announced Friday that she won’t run for re-election next year and plans to retire when her term ends in January 2019. …  She represents District 2 in east-central Hennepin County, which includes north and northeast Minneapolis, St. Anthony, Golden Valley, Medicine Lake and part of Plymouth.”

Not exactly surprising. The Star Tribune’s Emma Nelson reports: “The Minnesota Chamber of Commerce is taking the city of Minneapolis to court over the $15 minimum wage, saying the ordinance conflicts with existing state law. … In a lawsuit filed in Hennepin County District Court on Friday, the chamber asked the court to issue a temporary injunction freezing the ordinance, then a permanent injunction nullifying it.”

Just don’t say it. MPR’s Laura Yuen reports: “Two Champlin Park High School students were suspended from a Thursday state tournament volleyball match after video surfaced on social media showing one of the girls using a racial slur derogatory to African-Americans as she sang a rap song. … The girls, who are white, have apologized and accepted their punishment, said attorney Phil Villaume, adding that their families strongly condemn racism. More than 150 students at the school walked out in protest Wednesday.”

Quite a meeting. MPR’s Charlie Neibergall reports: “Standing in a stately Mayo Clinic library, Lilly Ross reached out and touched the face of a stranger, prodding the rosy cheeks and eyeing the hairless gap in a chin she once had known so well. … ‘That’s why he always grew it so long, so he could try to mesh it together on the chin,’ she told Andy Sandness ….. Sixteen months after transplant surgery gave Sandness the face that had belonged to Calen ‘Rudy’ Ross, he met the woman who had agreed to donate her high school sweetheart’s visage to a man who lived nearly a decade without one.”

Uh… no? “Are Honey Nut Cheerios Healthy? We Look Inside the Box” [New York Times]

Look who was in town:

Special thanks to Emily Lushi at the Hewing Hotel in Minneapolis for helping me surprise Portia. She went above and beyond. pic.twitter.com/yGot7EpKR7