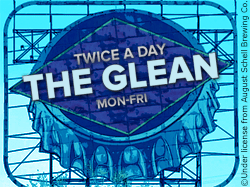 Arguably, cable news has no place in a facility claiming to promote health. The Pioneer Press’ Molly Guthrey reports on a life policy at Life Time Fitness: “… The Pioneer Press on Wednesday contacted Chanhassen-based Life Time, which confirmed a change in policy that might bum out gym rats who are news junkies. … ‘In fact, we did make the decision to remove cable news channels from our Life Time screens,’ Natalie Bushaw, senior director of public relations and internal communications, said in an email. … ‘Why?’ Bushaw said. ‘A couple of reasons — both the many member requests received over time across the country, and in keeping with our overall healthy way of life philosophy and commitment to provide family oriented environments free of consistently negative or politically charged content.’”

Front of the class. The Star Tribune’s Tim Harlow reports: “Nearly 86 percent of flights operating at Minneapolis-St. Paul International Airport arrive or depart on schedule, and that makes it one of the most punctual airports in the world. … MSP came in first for the percentage of flights that adhered to schedule in the ‘Major Airports’ category, according to the OAG Punctuality League, which ranks the on-time performance of the world’s largest airlines and airports, both here and abroad.”

Were you ready for a silver lining? MPR’s Kirsti Marohn reports: “At Green Lake near Spicer, workers are busy harvesting a cold crop — big blocks of ice. … The blocks will be used to build the ice palace for the St. Paul Winter Carnival later this month. Ice harvesting is a long tradition in Spicer, Minn., that dates back nearly a century. … Temperatures in the central Minnesota town didn’t get much above zero Wednesday. That’s uncomfortably cold weather to be working outdoors. But it’s great for making ice.”

Interesting bit of Minnesota historical trivia. For Hyperallergic, Allison Meier writes: “In the late 1960s, a group of scientists, city planners, architects, and inventors proposed a new city of 250,000 people who would fix urban problems through technology. Overcrowding, pollution, and sprawl would be addressed through self-driving roads, waste management reprocessing, modular housing, and underground tunnels for utilities, while a huge geodesic dome could regulate climate. Land was selected in a woodsy part of northern Minnesota, federal funding was acquired, and a 10-year construction timeline was drawn up. The idea was to start fresh with the American city, and then implement proven innovations on urban design in metropolitan areas around the country. … This is not a spoiler for the new feature-length documentary The Experimental City, but the Minnesota Experimental City (MXC) was never built. Optimistic dreams of the 1960s waned, and the people of Swatara, Minnesota, were not thrilled about having their local landscapes dug up for a space age metropolis and its nuclear power plant. Even in Minnesota, it became a footnote in midcentury history.”

We all have our secrets: “‘Miracle’ dog adopted in St. Paul had a secret: A 15-puppy pregnancy” [City Pages]