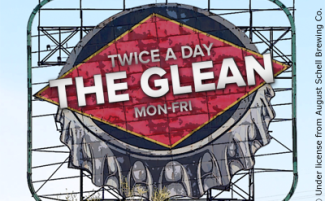 MPR reports, “With some state highways now closed by flood waters for more than a month, and the water still rising in some locations, residents in Minnesota communities affected by flooding are growing weary. The Minnesota and Mississippi rivers are seeing a second flood crest in the wake of recent rain and snowmelt — and more significant rain is possible on Monday. … Two of the highways leading to Henderson have been closed now for more than a month. Another nearby highway that had reopened — State Highway 93 between U.S. Highway 169 and Le Sueur — closed again on Saturday.”

In the Star Tribune Janet Moore says, “Later this month, builders will begin cutting down more than a thousand trees to make way for the $2 billion Southwest Light Rail Transit project, which will connect Minneapolis to Eden Prairie. The removal of trees and thicket on the trail — long the nexus of the controversy surrounding the Southwest rail project — would be a tangible sign that construction of the largest public works project in Minnesota history is moving forward.”

WCCO-TV’s Erin Hassanzadeh reports: “The man who was inside a St. Paul home during a possible explosion is alive and recovering in the hospital. The blaze happened Saturday afternoon on the corner of Hall Avenue and Baker Street West in St. Paul. Xcel Energy says there’s no evidence of a gas leak in the area, but neighbors noticed something that could help investigators in their search for answers.”

For the Pioneer Press, Bob Shaw writes: “The river-liberation movement recently claimed another victory. In Wisconsin, the city of River Falls is planning to remove two dams in the Kinnickinnic River, similar to a proposal to remove Mississippi River dams in Minneapolis. The planned dam removal — and the proposed dam removal — reflects a drive to return rivers to their natural, free-flowing state. … The River Falls City Council in January approved a plan to develop a seven-mile corridor of the river, after the dams are taken down. The lower dam on Lake Louise will be removed when its license expires in 2026, and the upper dam on Lake George will be taken out in 2035.”

For ThinkProgress, Frank Dale says, “Sen. Amy Klobuchar (D-MN) has supported more of President Donald Trump’s judicial nominees than the other Democratic senators running for president as well as the majority of her Democratic Senate colleagues. Although she was one of the most outspoken critics of Trump-appointed Supreme Court Justices Brett Kavanaugh and Neil Gorsuch during their nomination processes, Klobuchar, a member of the Senate Judiciary Committee, has voted ‘yes’ on more than 56% of Trump’s judicial nominees who were eventually confirmed — a higher rate than 32 of the other 46 senators who are members of or caucus with the Democratic Party.”

Also from the PiPress: “The Army Corps of Engineers is delaying plans to dispose of three Mississippi River lock-and-dam sites. It is considering the sale or demolition of Upper St. Anthony Lock, by the Third Street Bridge in Minneapolis. The dam at the same site is owned by Xcel Energy and is expected to remain. The Corps is not considering — for now — the disposal of the Lower St. Anthony Lock and Dam near the Interstate 35W bridge, or Lock and Dam No. 1 by the Ford Parkway Bridge.”


For Newsweek Chris Morran writes, “Though marijuana has been legalized — at least for medical use — in more than half the country, it remains outlawed by the federal government, which still considers cannabis on a par with heroin. First-term Congresswoman Ilhan Omar of Minnesota said Saturday morning that she believes it is time for the U.S. to not only legalize pot on a countrywide basis, but to retroactively clear the criminal records of those previously jailed on marijuana charges.”

For the Star Tribune, Miguel Otarola reports, “This summer, workers will seed native plants along the eroding shoreline of Lake Nokomis, now that the Minneapolis Park and Recreation Board has permits to move forward with the $444,000 restoration. The project, part of a master plan adopted in 2015, aims to restore natural habitat by replacing mowed grasses along the edge of the north and east sides of the lake. … Funded by a grant from the state’s Outdoor Heritage Fund, the project is now out for bid, and Duesman hopes the restoration work will begin around mid-June.”