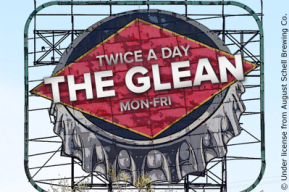 Very hard to get transparent ice. KARE’s Emily Haavik reports: “After a public response from the Minneapolis mayor and from community members, ICE confirmed that it arrested a man in Minneapolis Monday morning. … The incident was described in a Facebook post Monday morning from the Minnesota Immigrant Rights Action Committee, or MIRAC. They said that at about 7:20 a.m., they received notice that ICE was outside a home in the area of 42nd Avenue and Portland Avenue South. When they arrived, they wrote that they witnessed two black SUVs and a pickup surrounding a car. … According to MIRAC, ICE officers broke the back window of the car to reach in and unlock the doors, pulling the man out of the car and detaining him.”

Noor leaves the state. The Star Tribune’s Paul Walsh reports: “The former Minneapolis police officer serving time for the killing of Justine Ruszczyk Damond behind her Minneapolis home two summers ago has been relocated to a facility outside of Minnesota out of concern for his well-being, a state corrections spokeswoman said Tuesday. … Mohamed Noor, 33, had been in Minnesota’s Oak Park Heights prison before his transfer late last week for ‘his own safety under the circumstances,’ said Minnesota Department of Corrections (DOC) spokeswoman Sarah Fitzgerald.”

A report in the Atlantic recounts the harrowing tale of Daniel Drill-Mellum’s sexual assaults at the University of Minnesota. Barbara Bradley Hagerty writes: “He was blond and handsome and charismatic, and in his first two years at the University of Minnesota, Daniel Drill-Mellum had become a frequent and boisterous presence at frat parties. Laura, a rising sophomore, became friends with Dan her freshman year. She knew he had a reputation for being “touchy” with girls, but she was sure he was harmless. Laura trusted Dan. When she crashed on a couch in his fraternity house, Sigma Phi Epsilon, on July 18, 2014, she believed she was safe.”

Twin Cities German Immersion destruction diversion. The Pioneer Press’ Frederick Melo report: “A Ramsey County District judge on Monday granted a temporary restraining order sought by residents opposed to the demolition of the former St. Andrew’s Church. … The restraining order delays the Twin Cities German Immersion School’s plan to demolish the building for an expansion project, but perhaps not for long. As part of her order, Judge Jennifer Frisch required residents opposed to the plan to provide nearly $2 million through a security bond by 2 p.m. on July 22 to cover the potential impact on construction costs.”


All those other drivers, slowing down your commute. The Star Tribune’s Tim Harlow writes: “Rush hour traffic on Twin Cities metro highways is slowing — and expected to get slower. … Drivers were caught in congestion 25% of the time during the morning and afternoon commutes in 2018, according to the Minnesota Department of Transportation. That’s the highest level of congestion since the state began its annual highway traffic surveys in 1993.”

Being judicious about disclosing judicial appointments. At NPR, Tamara Keith and Josh Rogers report: “Minnesota Sen. Amy Klobuchar says she’d nominate a full slate of qualified judges on Day 1 of her presidency. ‘There’s going to be a lot of retirements, a lot of openings, and we have to move immediately,’ Klobuchar said. … But the Democratic candidate for president isn’t naming names. And she told The NPR Politics Podcast and New Hampshire Public Radio that she doesn’t intend to unless she wins.”

Expect the Trump administration to get right on that. The Duluth News Tribune’s Peter reports: “A resolution adopted by the Duluth City Council Monday requests the U.S. Environmental Protection Agency to reconsider whether petroleum refineries should be allowed to continue their use of hydrogen fluoride, a dangerous and potentially deadly chemical. … Mayor Emily Larson introduced the resolution in the wake of an April 26, 2018 explosion that rocked the Husky Energy refinery in Superior. Even though no hydrogen fluoride was released as a result of that incident, she noted that it stirred a lot of concern and unease about what could have happened if the chemical had escaped.”

LITERALLY: “In Minneapolis, closure of Thor Cos. leaves one big hole in the ground” [Star Tribune]

If it seems too good to be true… “‘Near Impossible To Track’: Eagan Police Warn Of Reshipping Scams” [WCCO]

Shell yes: “An Underpass for Turtles in Wisconsin Is Saving Dozens of the Little Guys’ Lives” [Mental Floss]

Minnesotan of note: “The Woman Who Dressed Barbie” [Minneapolis.St.Paul]

So long: “End of an era: Minneapolis’ last Perkins has closed” [City Pages]