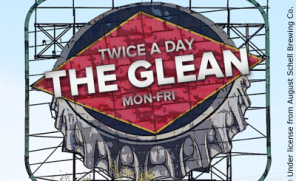 A bitter pill to swallow. The Pioneer Press’ Molly Korzenowski reports: “Lunds & Byerlys grocery stores will be closing their 14 pharmacy locations on July 16. … Starting the day after closure, patients can continue to receive care from nearby Walgreen locations where their prescription files will be transferred. … According to the grocer’s statement, the retail pharmacy industry as a whole has suffered economically. Pharmacy operations at Lunds & Byerlys had significant losses, making the services no longer feasible.”

Also closing… The Star Tribune’s Sharyn Jackson says: “When Haskell’s Wine Bar opened on Nicollet Mall in January 2018, chairman and CEO Jack Farrell was feeling hopeful. … The mall was still undergoing its multiyear reconstruction project, and he believed when it was done, downtown Minneapolis would come alive. … That didn’t happen, said Farrell, who closed the wine bar last month. … ‘Business was not really as barn-burning as we expected,’ he said. ‘We envisioned a lot more traffic on the mall than we were getting.’”

Getting old. MPR’s Peter Cox reports: “By 2030, 1 in 5 Minnesotans will be 65 years old or older. … And those numbers alone will pressure on the state’s long-term care systems in ways never seen before. ‘[Even] if services weren’t getting more expensive, just the sheer number of people that will be accessing services increases the investment significantly,’ said Rajean Moone, executive director of the Minnesota Leadership Council on Aging.”


Good work if you can get it. The Pioneer Press’ Ryan Faircloth writes: “Minnesota’s top investigator of child care fraud has been paid about $42,000 since she was put on leave nearly four months ago. … Inspector General Carolyn Ham was put on paid leave March 18 after an audit singled her out in detailing a rift within the ranks of those responsible for rooting out fraud. She makes $132,880 a year, according to the Department of Human Services.”

Discuss: “Six Reasons Scooters are Good and One Reason They’re Not” [streets.mn]


Should be a hot ticket: “U.S. Women’s National Team to play at Allianz Field” [KSTP]

Hopefully they get this figured out before then:

A trip down memory bike-lane: “60s and 70s Bicycle Photos from the Minneapolis Star and Tribune Archives” [twin city sidewalks]