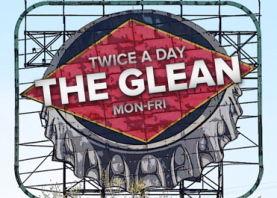 Minneapolitans beware. The Star Tribune’s David Chanen reports: “Minneapolis officials warned residents and pet owners Monday that two rabid bats were found in the past five weeks. … A homeowner trapped one of the bats at the intersection of Emerson Avenue S. and W. 25th St. on May 23. On Wednesday, officers picked up a bat found near a church at Glenwood Avenue and Logan Avenue N. Both tested positive for rabies at the University of Minnesota. ”

Food news. For the Forum News Service, Jonathan Knutson reports (via the Pioneer Press): “It’s likely that climate change already is affecting world crop production — hurting it in some areas, helping it in others, but on balance pushing it lower, according to a new University of Minnesota-led study. … ‘There are winners and losers, and some countries that are already food insecure fare worse,’ said lead author Deepak Ray of the University of Minnesota’s Institute on the Environment. ”

That’s today. KARE’s Gia Vang reports: “Protesters are expected to gather across the country Tuesday to encourage lawmakers to ‘Close the Camps’ and rally against allegedly poor conditions at detention facilities along the southern border. … In Minneapolis, organizers will protest outside of Sen. Amy Klobuchar’s downtown Minneapolis office. … The protesters want lawmakers, like Sen. Klobuchar, to refuse to authorize any more funding for family detention and deportation after the president signed a $4.6 billion bill that will help migrants in border camps.”

Street-repair vigilante. KSTP’s Joe Mazan reports: “They’re the road hazard we love to hate. … The wear and tear of Minnesota weather on our roads is constantly causing potholes to pop up. … Now, one St. Paul man is so fed up with pothole problems that he’s taking matters into his own hands. … Alex Susuki went to the hardware store, bought some patch asphalt with his own money and started filling the potholes on his street himself.”

More MNLARS fallout. The AP reports (via WCCO): “The people who run vehicle licensing offices around Minnesota will be getting a state check soon. … The money is to reimburse eligible deputy registrars for expenses related to the troubled Minnesota Licensing and Registration System, known as MNLARS. Technical problems delayed transactions and forced licensing staff to work long hours to catch up. Private deputy registrars make their money from fees on each transaction.”

New kind of K-9 unit. The Pioneer Press’ Jasmine Johnson reports: “The Ramsey County Attorney’s Office has hired its first four-legged employee. … Norie, a 2-year-old golden retriever, will be working with crime victims and witnesses at the attorney’s office. She is a therapy dog offering calming support in often high-trauma cases. … ‘We’re trying to make the criminal justice system more humane and kind,’ Ramsey County Attorney John Choi said. ‘Part of that is providing all the support that we can for those who are stepping forward to tell and share their stories.’ … Adding a dog to their staff is a step toward a better understanding of stress and trauma, Choi said. The office wanted to make the testimonial experience a little easier for victims and witnesses. It is an idea that has caught on elsewhere too.”

OUCH: “Patrol: Woman’s Foot Run Over By Semi After She Tried To Retrieve Sandal On I-35” [WCCO]

Congratulations: “Minneapolis man wins MLB remix competition for ‘Take Me Out to the Ballgame’ to celebrate All-Star weekend in Cleveland” [KARE]

In our hearts: “Where Exactly Is ‘Up North’ In Minnesota?” [WCCO]

Not what it sounds like: “Wisconsin’s ‘serial toilet clogger’ gets 150 days behind bars, three years probation” [KMSP]