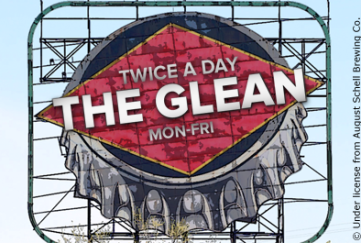 Business is good. The Forum News Service’s Dana Ferguson reports (via the West Central Tribune): “Minnesota law enforcement agencies seized 3% more property involved in the commission of crimes in 2018 than they did the year prior. … While the increase in the total number of properties seized was slight, the money the state took in from the cash and sale of the forfeitures grew 18%, a report released Thursday, Aug. 15, from the State Auditor’s Office shows. … In all, 317 law enforcement agencies in the state completed 8,091 forfeitures last year, compared to 7,852 in 2017. The bulk of those, nearly 61%, were vehicles seized after drivers were convicted of driving under the influence of drugs or alcohol.”

In a shocking development, a Trump appointee is revealed to be out of touch. In HuffPost, Mary Papenfuss writes: “America’s farmers have apparently been demoted by the Trump administration from ‘great patriots’ to ‘whiners,’ according to a tone-deaf joke by Agriculture Secretary Sonny Perdue. Farmers, struggling with plunging income and bankruptcies amid President Donald Trump’s trade war, were stunned. … Perdue made the joke while getting heat last week from Minnesota farmers complaining about, among other things, the latest blow to their businesses from the trade war. China has canceled all purchases of U.S. farm products in retaliation for Trump’s decision to impose 10% tariffs on $300 billion in Chinese imports. … At a Farmfest listening session with farmers in Minnesota, Perdue hit back at the complaints with his joke: ‘What do you call two farmers in a basement? A whine cellar.’ … As he pounded the table in mirth, some of the thousands of farmers at the event laughed nervously — which was followed by boos.”

Bad week for Minneapolis. The Star Tribune’s Libor Jany reports: “Minneapolis police on Friday continued their search for who fired the shots that killed a 17-year-old boy in north Minneapolis’ McKinley neighborhood earlier that morning. … The shooting was the city’s third homicide in the past seven days, and the 22nd of the year.”

PSA. KSTP reports: “Administrators with St. John’s University and its abbey have issued a warning about water contaminated with E. coli. … According to officials, a boil advisory is in effect after authorities found E. coli bacteria within the water distribution system earlier this week. … Officials said the source of the E. coli is unknown.”

Disturbing report. Sahan Journal’s Mukhtar M. Ibrahim reports: “A Subway employee in Rochester waved a knife at a Muslim woman who wanted to order sandwiches for her children and told her to ‘go wash your dirty Muslim hands’ and ‘go back to your country,’ according to the woman and a police report obtained by Sahan Journal.”

Sounds like no one’s getting rich: “Where Does Minnesota State Fair Revenue Go?” [WCCO]

Water racket: “You paid how much for one ice cube?!? St. Paul company cashing in on artisanal ice trend” [Pioneer Press]

Runaway Taurus: “Missing your bull? He was hoofing it on I-94” [St. Cloud Times]

Crossing the finish line: “This Year’s Susan G. Komen 3-Day Will Be The Last In Twin Cities” [WCCO]