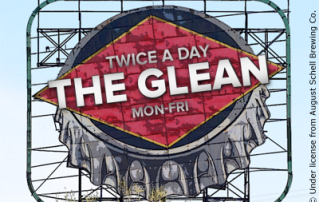 The Star Tribune’s Jessie Van Berkel reports: “Minnesota officials have selected a replacement for the state’s beleaguered vehicle licensing and registration computer system …. The state is spending nearly $34 million on the new system after deciding to do away with the Minnesota Licensing and Registration System (MNLARS), which was developed in-house at a cost of more than $100 million. … Colorado-based Fast Enterprises was the lone company to respond to the state’s search for a private software solution.”

At MPR, Matt Sepic writes, “An alleged domestic terrorist accused of firebombing a suburban Twin Cities mosque is challenging the evidence that the FBI collected on him. Michael Hari faces federal hate crime and explosives charges in connection with the attack on the Dar al Farooq Islamic Center two years ago. … Shannon Elkins, Hari’s public defender, said during the hearing in the St. Paul courtroom of U.S. Magistrate Judge Hildy Bowbeer, the FBI did not have probable cause to search Hari’s office, his parents’ home, or his cell phone.”

At the Pioneer Press,  Christopher Magan writes. “Hundreds of students who attended Globe University and the Minnesota School of Business may now be eligible to have their student loans forgiven. Attorney General Keith Ellison said Thursday the U.S. Department of Education has approved Minnesota’s request to allow all students who withdrew from the schools following their September 2016 fraud finding to apply for federal loan forgiveness.”

Rochelle Olson of the Strib reports, “The family of Jamar Clark, who was fatally shot by Minneapolis police in 2015, has reached a tentative $200,000 settlement with the city months after the City Council rejected a previous five-figure offer as too low. David Suro, the lawyer representing Clark’s father, said the settlement was reached Thursday afternoon after closed-door mediation with the sides in separate rooms.”

WCCO-TV’s Susan-Elizabeth Littlefield reports: “Thursday night marks one week since a major new law went into effect for Minnesota drivers. Since then, the State Patrol has caught at least 500 people breaking the new hands-free driving law. That’s not counting the 400 other agencies enforcing the rule across the state. Overall, troopers say they are a bit frustrated. Over the past few months, they’ve blasted Minnesotans with information on using mounts and not holding your phone, but it seems some habits are hard to break.”

For MPR, Martin Moylan writes: “Minneapolis city council members reiterated their commitment to limiting landlords’ screening of rental applicants, based on credit, eviction and criminal histories. That pleased renters and their advocates and angered property owners. At a city hall press conference Thursday, the move was cheered by folks who say they would be good tenants but unfair screening standards keep them from finding housing.… But landlords complain the draft measure is still onerous and could endanger other tenants and drive up rents.”

Also in the Star Tribune, this from Kavita Kumar, “As the maker of Levi’s jeans has lost shelf space at hundreds of shuttered Sears stores, it’s been searching for other places to sell its 505s and 511s. One of its latest finds is Target. The Minneapolis-based retailer, which has for years sold a lower-priced Levi’s line called Denizen, said Thursday that it will start carrying the brand’s core line, or its “Red Tab” label, in 50 stores later this month.”

For Fox 28 TV in Iowa Caroline Cummings reports, “Minnesota Sen. Amy Klobuchar on Wednesday made her pitch to bridge the urban-rural divide in the country by expanding rural health care, boosting agriculture and energy industries, and offering more support to farmers. … During her 40 minute speech on an Ankeny farm, Klobuchar said she would bring back ‘respect across the country’ for rural America by creating a new classification under Medicare to give rural hospitals more support so they can stay open; offering federal loan forgiveness for in-demand occupations like farming and careers in agriculture; and investing in clean energy industries and rural infrastructure–a piece of her larger $1 trillion infrastructure plan.”