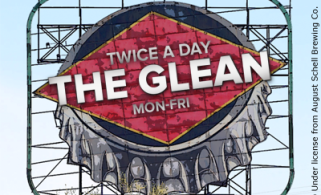 A big loss. The Duluth News Tribune’s Brady Slater reports: “Third- and fourth-generation members were too devastated to speak Monday following the fire that burned Duluth’s oldest-surviving Modern Orthodox Jewish synagogue. … ‘It’s not a good day,’ one of the leaders said, declining to be interviewed. … The synagogue belonging to the Adas Israel Congregation was destroyed by the fire at 302 E. Third St., Duluth — its walls built of lumber collapsing and spilling out into the streets. Duluth police, fire and the Bureau of Alcohol, Tobacco, Firearms and Explosives are investigating the incident.”

The Star Tribune’s Libor Jany writes: “Authorities have arrested a former Minneapolis public works employee on suspicion that he threatened to harm city employees after losing his job earlier this year, sources said. … The man, whose identity hasn’t been released, was arrested Friday on a warrant from Ramsey County, according to a police spokesman. … Spokesman John Elder said that the case prompted the department to re-evaluate its security measures, as it would with any threat.”

Business is bad. MPR’s Catharine Richert reports: “Standing in the front office of Corn Plus, Sheila Helland gazes at a wall with photograph of the plant’s employees. In a few days, most will be out of a job. … ‘It’s been rough, it’s been rough,’ she said. ‘It’s affecting a lot of people — a lot of people’s lives.’ … Helland, who has been with the ethanol co-op since it opened 25 years ago, is the plant’s human resources manager and was involved in late August with breaking the news to 37 Corn Plus workers that they were being laid off because the plant is closing indefinitely.”

Interesting history. KMSP’s Maury Glover reports: “For many Minnesotans, going up north for the weekend is a way of life. But for one group of people, a lake in north-central Minnesota is an oasis in the middle of cabin country. … Lake Adney is a hidden gem in Crow Wing County, Minnesota. For nearly 100 years, African Americans have been coming here to own a piece of paradise.”

Next-level thrilling: “The Polaris RZR, an Off-Road Thrill That Can Go Up in Flames” [New York Times]


New at the U: “Rare disease council hopes to ensure families are not an ‘afterthought’” [Minnesota Daily]