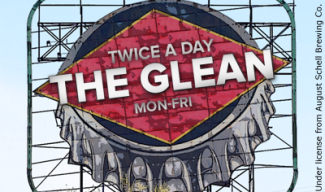 In the Star Tribune, Chris Serres and Glenn Howatt report, “Thirteen patients at a Catholic-run nursing home in northeast Minneapolis have died from COVID-19, as the respiratory disease continues its deadly march through Minnesota’s senior care communities. Catholic Eldercare reported the outbreak in a letter to family members and said it had begun to isolate residents infected with COVID-19 in a designated section of its 174-bed nursing home at 817 Main Street NE., which first reported cases of the virus among its residents and staff two weeks ago.”

At MPR, Jon Collins writes, “Blasting Madonna and chanting, “No honest pay, no lattes,” dozens of Caribou Coffee employees and their supporters rallied Monday morning outside a Twin Cities Caribou shop. They’ve been mounting a campaign in recent weeks calling on the company to provide more protective equipment and benefits for essential employees at coffee shops during the COVID-19 pandemic. Caribou has moved too slowly in getting employees protective equipment like gloves and masks, said Claire Umolac-Bunker, who has worked at a Roseville store for more than four years.”

For NPR, Danielle Kurtzleben reports, “Small businesses, already hammered by the coronavirus pandemic, can’t seem to catch a break. On the first day of the reopened Paycheck Protection Program, a key lifeline from Congress, banks are reporting that the Small Business Administration’s portal is not working. Bankers told NPR on Monday that the system, known as E-Tran, would not allow them to enter loan application information that is needed for small businesses to access the program.”

Says Bill Hudson for WCCO-TV, “At Cambria’s sprawling flagship plant in Le Sueur, more dayshift workers returned to their jobs today. Prior to the COVID-19 pandemic the workforce totaled some 650 employees. On March 27th roughly two-thirds of them were sent home. ‘A lot of the things we’ve put in place have to do with the CDC guidelines,’ Cambria’s V.P of Operations Brian Scoggin said. One of the biggest recommendations is to monitor body temperatures. … Scoggin further explained how inside the plant’s main entrance, employees stand well apart, in spaces marked in six foot increments.”

Says an AP story, “A Minneapolis-area senior living facility that was evacuated earlier this month after an outbreak of COVID-19 announced Monday it won’t reopen. The nonprofit organization Transforming Age said it has made ‘the difficult decision’ not to reopen Meridian Manor in Wayzata ‘as a result of multiple negative impacts of COVID-19.’ Nearly 50 residents were moved from Meridian Manor on April 18 after the Minnesota Department of Health said a majority of staff members and administrators at the facility became sick and were unable to care for residents.”

For agweb.com John Herath writes, “A week of cooperative weather set planting at near record pace across the corn belt last week. Corn acres planted jumped to 27%, up from 7% the previous week. Much of that progress was in two key states according to Chip Flory of AgriTalk Radio. ‘A couple of the states really stand out, we’ve got Iowa 39% planted, we’ve got Minnesota at 40% planted, 40% planted in Minnesota’, Flory said. ‘Both states are about double the five-year average pace. This means that in the Last week, Iowa planted about 5.2 million acres of corn. Minnesota planted about 3.3 million acres of corn’.”

The Star Tribune’s Paul Walsh says, “A notorious Twin Cities counterfeiter and scam artist has lengthened his rap sheet, this time charged with paying for an Eagan restaurant with a phony $400,000 cashier’s check and then draining the business of money. Edward Stahlmann, 37, of St. Paul, was charged Monday in Dakota County District Court with three counts of check forgery in connection with his agreement to buy Wyatt’s Twisted Americana off Cliff Lake Drive in January.”

Also in the Star Tribune, this from Katy Read, “The allure of Excelsior’s quaint and vintage neighborhoods is reigniting a battle between residents who want to preserve the city’s modest charm and newcomers who want to build big. City officials are considering several proposals intended to preserve Excelsior’s character that could also give it the toughest residential zoning regulations in Minnesota, a move that could deter new development. One proposal includes a powerful review board that could reject proposed construction it deems inappropriate. … Officials are weighing a proposal to limit the size of a new home based on lot size.”