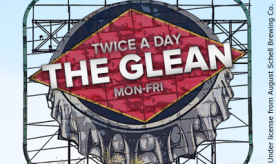 From the Associated Press: “The number of people testing positive for the coronavirus in South Dakota has surpassed 1,100, and more than half of those cases have some connection to the Smithfield Foods pork processing plant in Sioux Falls. … A total of 934 cases were in Minnehaha County, the location of the Smithfield Foods plant. The plant is one of the largest known clusters of COVID-19 cases in the country.”

From the New York Times: “President Trump is set to issue new federal guidelines on social distancing on Thursday in a bid to move the country closer to reopening for business, even as public health officials warned that it was far too early for any widespread return to public life. Governors in many states are making their own plans, often in consultation and solidarity with their neighbors. But their actions will depend on the widespread availability of tests to track the coronavirus, an effort that is woefully lagging.”

WCCO-TV reports: “The state of Minnesota received half of the $2.1 billion allotted from the federal government’s Coronavirus Relief Fund on Wednesday. Gov. Tim Walz announced Wednesday evening that $1,090,413,660 of the funding, that was made possible through the CARES Act, is now in Minnesota’s hands.…The remainder of the money, which is expected to arrive before the end of April, will be distributed to local governments within the state.”

In the Star Tribune, Glenn Howatt writes, “A state computer system that was supposed to streamline enrollment for Medicaid and MinnesotaCare has instead increased workloads for counties and cost the state $76 million in federal funding due to data errors. The state needs to do a better job preventing errors caused by the system and should better monitor who has access to sensitive data such as income information, according to an audit released Wednesday by the Office of the Legislative Auditor. The system, known as the Minnesota Eligibility Technology System, or METS, was launched in late 2013 and so far has cost $432 million.”

Also from the AP: “The American Civil Liberties Union of Minnesota is suing to release inmates endangered by COVID-19 at Moose Lake prison in northern Minnesota. … According to the department’s database, 12 inmates in Moose Lake are confirmed positive for the coronavirus and another 31 inmates are presumed positive. The ACLU-MN says at least 11 correctional staff reportedly also have COVID-19.”

The Star Tribune’s Stephen Montemayor writes: “The mother of Minnesota Attorney General Keith Ellison has died from COVID-19 complications, bringing the pandemic close to home for a state official directly involved in fighting virus related scams and price gouging. Ellison’s mother, Clida, died March 26 from complications of the COVID-19 virus. She was 82

At Forbes, Jason Freeman writes, “The SBA has issued Paycheck Protection Program (“PPP”) guidance for self-employed individuals who file an IRS Schedule C with their Form 1040 to report their self-employment income.  The guidance comes in the form of an Interim Final Rule that fleshes out the PPP criteria for a self-employed borrower, including the rules for eligibility, calculating the loan amount, and loan forgiveness. … While the guidance answers a number of questions, it raises some new issues, particularly with respect to the distinction between “payroll costs” and “owner compensation replacement”—a major planning issue for taxpayers attempting to maximize loan forgiveness that is discussed at the end of this piece.”

At MPR, Paul Huttner writes, “We know coronavirus is causing widespread tragic health and economic impacts. … But one effect of the sudden economic shutdown is likely to be the biggest drop in global CO2 emissions on record. Simon Evans from Carbon Brief has been crunching emissions numbers during the COVID-19 outbreak. While there is still uncertainty for the rest of this year, it’s becoming increasingly clear that 2020 will likely produce the biggest CO2 emissions drop on record. The updated estimates on Wednesday suggest a 5.5 percent drop in global CO2 emissions in 2020.”

Says the Star Tribune’s Tim Harlow, “Hennepin County libraries are back in business, more or less. Patrons can reserve materials online, then go to one of the eight branches where curbside pickup service began this week. County residents can use their library cards to put a hold on books and other items available on the library system’s website and choose the location to pick them up. Items can be picked up between 9 a.m. and 5 p.m. Monday through Friday at the Brooklyn Park, East Lake, Eden Prairie, Maple Grove, Plymouth, Ridgedale, Washburn and Webber Park branches.”

At KSTP-TV, Joe Mazan reports, “It’s a docuseries that’s taken the world by storm. Netflix’s ‘Tiger King’ gives viewers an intimate look at some of America’s most notorious exotic animal owners. The popularity of the series is bringing attention to The Wildcat Sanctuary in Sandstone, Minnesota. … [Founder Tammy] Thies believes the ‘Tiger King’ series will help wildcat sanctuaries in their mission to save animals. ‘Our industry has been impacted because it takes our rescue work and now puts it in mainstream pop culture,’ Thies said.”