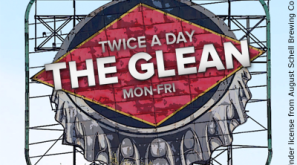 So where do you send your bill? The Star Tribune’s Paul Walsh reports: “Two law enforcement agencies acknowledged Monday that officers patrolling Minneapolis during the recent protests knifed the tires of numerous vehicles parked and unoccupied in at least two locations. … Video and photo images posted on the news outlet Mother Jones show officers in military-style uniforms puncturing tires in the Kmart parking lot at Lake Street and Nicollet Avenue on May 30. … Photos and video at S. Washington Avenue at Interstate 35W, also showed officers with knives puncturing the tires of two unoccupied cars with repeated jabs on May 31. Department of Public Safety spokesman Bruce Gordon acknowledged that the tires were cut.”

Useful “defund the police” explainer. The Associated Press writes(via MPR): “Protesters are pushing to ‘defund the police’ over the killing of George Floyd and other black Americans killed by law enforcement. Their chant has become rallying cry — and a stick for President Donald Trump to use on Democrats as he portrays them as soft on crime. … But what does ‘defund the police’ mean? It’s not necessarily about gutting police department budgets.”

Frey’s take. KSTP reports: “Minneapolis Mayor Jacob Frey reiterated his thoughts on policing during an interview Monday morning. … In an interview during ‘Good Morning America,’ with ABC News, Frey addressed the Minneapolis City Council’s intent to move toward dismantling the city’s police department. … ‘Let me be clear, I am for massive, structural and transformational reform to an entire system that has not for generations worked for black and brown people; we have failed them, and we need to entirely reshape the system, we need a full-on cultural shift in how our Minneapolis Police Department and departments throughout the country function,’ Frey said during the interview. ‘Am I for entirely abolishing the police department? No, I’m not. So, over the coming days and weeks, I’m looking forward to working with council, talking with them about deciphering what particularly they mean when they say ending and abolishing and I’ll be talking with them directly.’”

A COVID-19 model explainer. The Minnesota Daily’s Madeline Deninger reports: “State officials are looking to the University of Minnesota’s COVID-19 predictions, influencing public health measures and throwing the school into the spotlight. … Minnesota’s COVID-19 model is a collaboration between the Minnesota Department of Health and the University’s School of Public Health. The modeling predicts multiple outcomes for the state based on factors including social distancing measures, hospital capacity and demographics. … Gov. Tim Walz has cited the model when announcing executive orders, including the state’s stay-at-home policy. The most recent model, which came out May 11, helped inform the state’s gradual reopening.”

Angle lacking anglers. MPR’s John Enger reports: “Ever since the border crossings to and from the Northwest Angle were closed down, resident Kellie Knight has been exploring nature with her children, Julian and Iris. Usually Knight spends her summers working at a resort, packed with anglers. She says she’s trying to make the best of the COVID-19 precautions. … Nearly every dollar that goes to the Northwest Angle of Minnesota travels there in the pocket of an angler. … Only about 120 people live there year-round. But usually in the early summer, trucks and boat trailers arrive in such force, the dust clouds they raise from the dirt roads never quite have a chance to settle — but not this summer.”

Quite a story: “Lake Street Store Manager Activated Into Duty After His Business Was Looted, Burned” [WCCO]