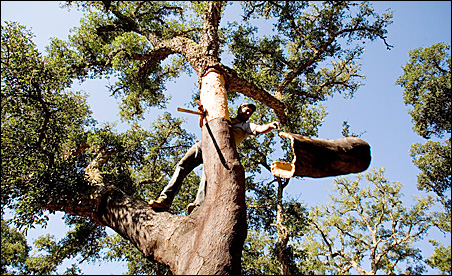 REUTERS/Nacho Doce
Ze Santos strips bark from a cork tree on a farm in Odemira. The spongy bark is stripped from the trees every nine years by skilled workers using handheld axes.

LISBON — If you cracked open some champagne to see in the New Year, chances are the cork blown out by the bubbly was made in Portugal.

But in the country that produces over half the world’s cork, an ancient industry sees little cause for celebration. The global economic downturn coupled with competition from screw cap and plastic stoppers is hitting cork producers hard.

A quarter of last summer’s bumper cork crop remains unsold and farmers have seen prices fall by up to 30 percent over the past five years.

Such stark figures are raising concerns about the future of the rural economy in one of the poorest parts of western Europe, and about a unique forest environment that’s home to some of Europe’s rarest wildlife.

“Unless the commercial value of cork stoppers is maintained, there’s a risk that these cork oak landscapes will face an economic crisis, an increase in poverty, an intensification of forest fires, a loss of irreplaceable biodiversity,” warned Nora Berrahmouni, head of forestry at the World Wildlife Fund’s Mediterranean office in Rome.

Environmentalists see the cork industry as an all-too-rare example of economics and ecology working in harmony.

The forests of gnarled cork oak trees cultivated across southern Portugal support a vast range of plant and animal life and soak up millions of tons of carbon dioxide.

But with plastic or aluminum alternatives accounting for a quarter of the global market for wine bottle tops, conservationists fear landowners could switch to higher yield alternatives such as fast-growing eucalyptus trees. Imported from Australia in the 1970s and 1980s to feed the paper industry, they are already widespread in Portugal.

“The eucalyptus takes all the water and light for itself, they don’t allow native species to grow. It shuts out biodiversity and makes forest fires easier,” said Domingos Patacho, from Quercus, a leading Portuguese environmental campaign group that takes its name for the Latin word for oak.

Cork has been used to seal wine vessels since the ancient Greeks, but the industry took off in the 18th century with the widespread commercial use of cork bottle stops.

Smaller cork forests are also found around the western Mediterranean, but Portugal has about one-third of the world’s total, accounting for 52 percent of global cork production.

The sparsely populated forests of cork have developed into one of Europe’s richest eco-systems, a valuable sanctuary for endangered species such as the Iberian lynx, black stork and imperial eagle.

Beneath the oaks, farmers also graze sheep, goats or semi-wild black pigs, which are highly prized as acorn-fed hams.

No trees are cut down to make the cork. Instead the spongy bark is stripped from the trees every nine years by skilled workers using handheld axes. The bark slowly grows back and the trees frequently live to well over 200 years. The Portuguese insist that stripping keeps the trees healthy.

The cork industry association APCOR says the regeneration of the bark makes the cork oak more effective in absorbing carbon dioxide, the gas blamed most for global warming. It estimates that the amount of CO2 absorbed as a result of each summer’s harvest equals the annual greenhouse gas emissions of 185,000 cars.

Amorim, the world’s largest producer of wine corks has enlisted the services of Hollywood comedy star Rob Schneider in a video campaign to save the cork trees.

The industry’s problems stem from a boom in the global wine industry in the 1980s. Vintners were soon complaining that cork producers had cut corners to meet demand and that wine was frequently ruined by tainted corks. That led to swing toward plastic or screw-top aluminum alternatives.

Cork producers say they have cleaned up their act and the risk of opening a bottle of “corked” wine is minimal. However, opinion among connoisseurs remains divided. Decanter magazine came down in favour of screw tops last year, while others insist the unique qualities of cork are essential for the aging of fine vintages.

“If it’s no longer economically viable to harvest the cork, the producers will no longer pursue the active forest management which keeps the forest such a healthy eco-system,” said Jose Manuel Lupi Caetano, president of the growers association UNAC.

Portugal produces 40 million corks each day. Cork sales earned the nation a much-needed 854 million euros (about $1.1 billion) in exports in 2007. About 70 percent of the cork harvested is used to make bottle seals, but the industry has been seeking to diversify with construction and insulation products, including innovative applications in the automotive and aerospace industries.

But producers remain concerned that unless the market picks up, their long-term future could be bleak.