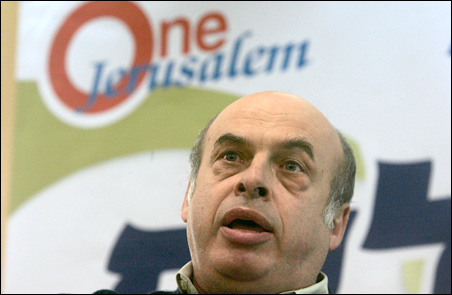 JERUSALEM — So, there are two eastern European guys, one from Ukraine and the other from Moldova.

One of them is on the short side and is a chess whiz who suffered through a Siberian labor camp for his uncompromising belief in democracy and freedom. Meet Natan Sharansky, who was picked this weekend by Israeli Prime Minister Benjamin Netanyahu to lead the Jewish Agency for Israel.

The other is a beefy former nightclub bouncer who says nasty things about Arabs and is generally seen as just plain uncompromising. Meet Foreign Minister Avigdor Lieberman, who, it’s fair to say, is feared and loathed as a hardliner.

The two men couldn’t carry themselves more differently and you don’t have to be a longtime observer of Israel to know which one fits in better with the western diplomatic community and is most favored by America.

Both reflect something unbending in current Israeli political thinking. But  international diplomats will make a mistake if they ignore the reality signaled by the popularity of these two politicians and its consequences for the peace maneuvers that got underway this last week.

Sharansky pulled out of former prime minister Ariel Sharon’s government in 2005 to protest the Israeli withdrawal from its Gaza settlements and has since been occupying an office in a right-wing think thank in Jerusalem — when he hasn’t been touring the U.S. on high-paying speaking gigs.

Lieberman, meanwhile, lives in a settlement, drove his party to third place in the country’s February election with a promise of imposing a loyalty oath on Arab citizens of Israel, and, in his first statement as foreign minister, said “If you want peace, prepare for war.”

That classically Lieberman aphorism prompted gritted teeth at the State Department, which sent special envoy George Mitchell to Ramallah and Cairo recently to prepare the U.S. plan for handling the new Israeli government.

But in their different ways, Sharansky and Lieberman are both saying the same thing: Israelis are tired of being pressured to hand over land to Palestinians, while the Palestinians ignore the world’s polite requests for an end to terrorism.

When I met with Sharansky just after he resigned from the cabinet in 2005, he explained what he had told Prime Minister Sharon when he went to his office to quit.

“One-sided concessions by us leave the Palestinians with their problems,” he said. “It’s an illusion to think international pressure on us will stop when we make concessions. We’re making terrorism legitimate. We dismantle settlements, terror continues, and the world will say we just didn’t dismantle enough.”

That’s how most Israelis tend to see things these days. (If you don’t believe that, check out the election results and witness the disappearance of the so-called left-wing parties.) And Sharansky’s position is remarkably close to that of Lieberman. For example, instead of simply giving up the West Bank to the Palestinians, Lieberman has said that Israel ought to keep some of its settlement blocs and, in return, hand over parts of Israel where its Arab population lives to a new Palestinian state.

For Israelis, that would give them a sense of having driven a good bargain and received something in return for their concessions.

Western observers may not see things that way, but now they know what Israelis think. And Israelis are the ones that count.

So maybe we need to look for the difference between the two men for a hint of how we ought to interpret their positions.

Sharansky, 61, wrote “The Case for Democracy” in 2004. It was a favorite of George W. Bush. It argued that the dictatorial Arab regimes couldn’t make peace with democratic Israel — totalitarian regimes need an enemy to demonize. The west needed to make the Arab countries democratic, instead of bolstering dictators.

We all like democracy, of course. So thumbs up for Sharansky, whose book went onto The New York Times bestseller list.

Lieberman, on the other hand, is generally portrayed as rather Stalinist in his approach to dissent and minorities. That earns him the Bronx cheer from the media.

The thing to remember is that it also earned him 15 seats in the parliament, leadership of the second-biggest party in the new coalition government, and the foreign minister’s chair.

Sharansky, by contrast, is being nominated to lead a body whose main function in these days of falling immigration is to encourage Jews in the diaspora to remain connected to their community. (Jewish Agency officials fear the dwindling population of Jews worldwide through intermarriage, and cite 50,000 new “former Jews” each year around the world due to  assimilation.)

The former dissident Sharansky will be the lovable face of Israel’s new tough line and may even make it to the (ceremonial) president’s mansion in a few years. But it’s Lieberman who wields power.

Natan Sharansky and Avigdor Lieberman: Two Israeli politicians to keep an eye on