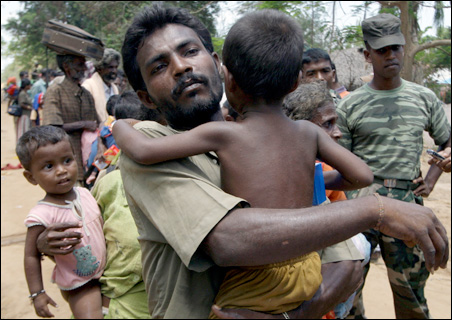 REUTERS/David Gray
More than 100,000 civilians have fled the area held by the Liberation Tigers of Tamil Eelam.

This week an estimated 100,000 ethnic Tamils fled from the no-fire zone turned battlefield between Sri Lanka’s government and the Liberation Tigers of Tamil Eelam (LTTE) in the country’s northern Vanni region.

This dramatic mass exodus comes after civilians survived for four months on a 17 kilometer (10.5 mile) strip of land abutting the Indian Ocean. There the civilians were reportedly kept hostage at gunpoint and used as a human shield by the LTTE, while being shelled repeatedly by military forces.

According to the International Committee of the Red Cross (ICRC), 4,500 civilians were killed in the last three months.

The war is not over for the civilians who still remain trapped in the combat zone. Estimates of the exact number vary wildly: A government source said Thursday that there were no more than 15,000 people, while aid agencies estimate that at least 50,000 remained. A Sri Lankan medical doctor still in the combat zone said he believes 200,000 were stuck there.

Aid agencies fear that as the battle enters its final stage, casualties could reach their highest levels yet.

“One only needs to imagine: thousands of children, women and men stranded in the very midst of the combat zone,” said Pierre Krahenbul, director of operations for the ICRC on Tuesday. “Every rocket or mortar fired is wounding or killing civilians.”

Since November 2008, the Vanni has been completely off limits to independent media and most aid agencies. What small pieces of information have leaked out describe civilians trapped in an ongoing nightmare.

Extreme food and water shortages have led to malnutrition, and these hardships are further exacerbated by the local equatorial climate.  A lack of necessary medicines has resulted in the deaths of children from diarrhea and other treatable diseases. Civilians have been living under patched-together tarpaulin tents, leaving them exposed to aerial bombardments. Even minor injuries from shrapnel are life-threatening because of a lack of clean bandages or antibiotics.

A March 2009 situation report issued by local medical staff from the combat zone describes how the only hospital facility in the area — a single concrete building, crowded with people lying on floors — was treating 120 to 150 casualties, 30 to 50 pregnant mothers, and more than 400 in-ward patients every day.

In addition, the “number of newly diagnosed, agitated mentally ill clients has been showing significant rise,” the report said.

Though they have survived these horrific conditions, the tens of thousands of traumatized civilians who fled this past week face another major hurdle, as the government attempts to provide them with shelter, food, water and medical attention.

According to an aid worker in Vavuniya, the town where at least 40,000 internally displaced people (IDPs) from the Vanni are already living in camps, the government is “completely unprepared.” Coordination with aid agencies, they said, is “nonexistent” and no one knows yet where the massive influx of new IDPs will be put.

“When there were 40,000 they couldn’t give food and water,” said one Tamil resident in Vavuniya. “The new people are sleeping on roads and buses and in open areas. It’s a very sad thing.”

This week, hospitals in Vavuniya were reportedly overflowing with the number of injured and sick being brought in.

“Our hospital has got about 450 beds, and we’ve now got more than 1,700 patients in the hospital — on the floor, in the corridors, and even outside,” said Paul McMaster, a surgeon with Medecins Sans Frontiers (Doctors Without Borders) in Vavuniya. “Buses that bring these people down, people are dying on those buses, and bodies are being taken off the buses sometimes as well.”

There are also increasing concerns that the newly escaped civilians are being submitted to screening by government-backed paramilitary groups. At the Omanthai checkpoint in the North, for instance, where people are placed on buses to be taken to Vavuniya, paramilitary members are reportedly present, pointing fingers at those they believe to be LTTE members or sympathizers.

Thus far, aid groups have not been able to monitor what happens to civilians as they leave the war zone, raising fears that many could be swept up in the government’s hunt for combatants.

Although the current conflict between the government and LTTE appears to be in its last days and even hours, the future for the war-afflicted civilians remains a difficult one.

“Those who left in past days and hours are totally devastated after months of exposure to the fighting and after the loss of close relatives and property. They face much uncertainty about their future, personal security and family members left behind in the combat zone, who may well be missing,” Krahenbuhl said.