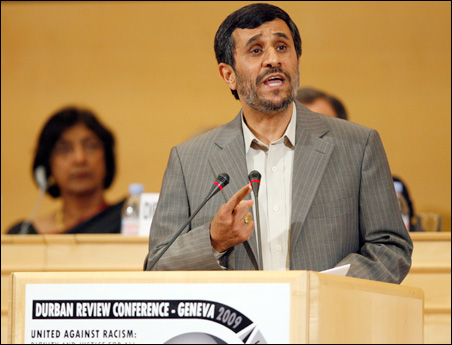 GENEVA — The 2001 Durban conference on racism came to embody a reflexively anti-Israeli and anti-American rhetoric. When U.N. organizers of the second racism conference invited Iran’s virulently anti-Israeli president,  Mahmoud Ahmadinejad, to be the opening speaker, they were asking for trouble.

Ahmadinejad did not disappoint.

What had promised to be a chaotic gathering seems to be dissolving into a circus as the conference gets underway. The United States, Canada, Australia and several other countries had announced well in advance that they would boycott the affair. Britain and France agreed to attend, but after Ahmadinejad lashed out at Israel as “racist perpetrators of genocide,” their delegations also walked out in disgust.  The vehemence of the Iranian president’s remarks drew rounds of applause from supporters in the audience. In contrast, a group of protesters dressed as clowns to underscore the absurdity of the situation were quickly hustled out of the room.

The conference, which will continue through this week, is billed as a review of progress made since Durban. The concern this time around was not the watered-down statement that is likely to come out of the discussions. That was negotiated in advance, and it will not say much that is controversial.  But the media circus focusing on the events surrounding the conference is another story, and is likely to be far more destructive.

The fierceness of Ahmadinejad’s remarks surpassed even the wildest expectations and stoked the media fervor.  After he had spoken, U.N. Secretary General, Ban Ki Moon, clearly shaken, issued an unusually blunt statement deploring the whole sorry affair. “This is the opposite of what the conference sought to achieve,” Ban Ki Moon said. “This makes it significantly more difficult to build constructive solutions to the very real problem of racism.”  Ban Ki Moon said that he had talked with Ahmadinejad about the importance of galvanizing the international community towards a common goal. Ahmadinejad had clearly not listened.

Given the shambles of the first day, it is hard to see what will come out of the next few.  The Swiss are already appalled.  Swiss Foreign Minister Micheline Calmy-Rey wisely decided not to attend the conference.

Switzerland’s president, Hans Rudolf Merz, was not so prescient. He has come under heavy criticism for having invited Ahmadinejad for dinner on Sunday night.  Critics here point out that Merz is not an expert on foreign policy, and that Ahmadinejad is not in Switzerland on a state visit.  The Swiss stress that the conference is a U.N. affair, and since Geneva is the European headquarters for the U.N., they couldn’t refuse to have the conference staged here.  They may think differently in the future.

Conference participants seemed at times to be almost outnumbered by critics and protesters who have more than made up for the absence of a U.S. delegation.  Harvard law professor Alan Dershowitz was particularly scathing about the Swiss welcome for Ahmadinejad and almost as vehement as Ahmadinejad.

A young Israeli student from Tel Aviv, who identified herself only as “Sharon,” and sported a red clown’s nose to underscore the absurdity of the situation, was equally furious. “I think it is a joke,” she said. “He (Ahmadinejad) is like a clown coming here to teach us about human rights. The conference is a lot of words without meaning. When Libya, Syria and Cuba are organizing this conference, we can’t stand for that.”

“I think that the conference is focusing exclusively on rhetorical issues and not on deeds,” said Noah Schimmel, from Boston.  “It is not funded in a way that would allow it to take action to protect human rights.”

I asked one protester what she had thought of Ahmadinejad’s speech. “I don’t know,” she said, “I was to busy protesting against it.”

Another participant, Ismail Kamal, a freelance journalist from California, who is now based in Khartoum, Sudan, was milder in his comments.  “I think you should look at who is criticizing the conference,” he said. “They mostly come from countries who are not attending. The U.S. has made the greatest statement against racism by electing a black president, but it is not here.”

The question of what Ahmadinejad hoped to achieve by lashing out so fiercely against the west is a more intriguing question to arise from the conference.  He is facing an election in Iran, and gaining headlines, and by taking an outspoken stand in front of television cameras in Europe, he may be hoping to boost his standing among conservatives at home.

A subtler motive may be a desire to counter Barak Obama’s widespread popularity, which threatens to win back support from many of the Middle Eastern countries alienated by the policies of the Bush administration.  By further polarizing the split between east and west, Ahmadinejad may have been hoping that pushing a few standard buttons would get the U.S. to react in anger. Avoiding that scenario may turn out to be the best reason at all for the U.S. not attending.