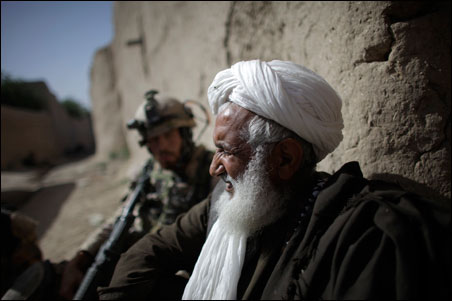 Jorge Silva/REUTERS
A soldier speaks to an Afghan man during an anti-Taliban operation involving more than a thousand soldiers from the U.S., Canadian and Afghan armies in Kandahar Province.

KABUL, Afghanistan — “You’ve all heard of strategic communications,” said the high-ranking U.S. official, holding an off-the-record briefing for journalists in Kabul last month. “It used to be called ‘psyops,’ and before that, ‘propaganda.’ Well, the United States is about to unroll a major stratcom initiative. We cannot let men on motorcycles and flatbed trucks win the information war.”

Welcome to the Battle for Afghan Hearts and Minds, where — using the language of strategic communications, or “stratcom” — combat becomes “kinetics,” an accidental shooting becomes an “escalation of force” and assassination squads are known as “counterinsurgency operations.”

In this world, the message is king, and reality is fungible. Clearly discernible in every briefing, interview or conversation with a military official is the stated policy of the U.S. administration.

The message, the official at the Kabul briefing said, was “complex yet simple: The United States is here to help you. We are not occupiers. And the Taliban are not great leaders of the faithful.”

Unfortunately, that message fell flat in early May in Farah province, when U.S. forces dropped a pair of 2,000-pound bombs on two residential compounds, killing at least 97 people, most of them women and children. It is the largest civilian loss of life since the war began in 2001. The high death toll was due to the size of the bombs, and the fact that residents of the area had placed their families in the homes of tribal elders to shelter them from a firefight between the Taliban and government forces.

When the Afghan police and army were in over their heads, they called for help from the U.S. forces, which provided tactical air support and, later, a B-1 bomber. Convinced that insurgents were hiding in the compounds, the air crew dropped their payload.

The exact casualty figure is still in doubt, since many of the bodies were so mutilated by the blast that they could not be identified; partial remains were buried in a large common grave. But the Afghan Independent Human Rights Commission (AIHRC), after conducting extensive investigation, said that 65 children, 21 women and 11 men died in the air strikes.

The incident prompted Admiral Mike Mullen, chairman of the Joint Chiefs of Staff, to warn that the new U.S. strategy was in real danger unless measures were taken.

“We cannot succeed in Afghanistan … by killing Afghans,” he told scholars at the Brookings Institution, in remarks widely quoted in the media. “We can’t keep going through incidents like this and expect the strategy to work.”

That advice has yet to filter down to the operational level in Afghanistan, where clumsy efforts at “messaging” have sought to obscure the scale of the tragedy.

Judging by the response to the Farah bombing, “stratcom” is having a bit of trouble getting off the ground.

The U.S. military tried desperately to spin the story, initially denying that any significant civilian casualties had resulted from the air strikes. Carefully placed leaks in the media suggested that the Taliban themselves had killed dozens of innocent people with grenades to make it appear that they had been killed by U.S. bombs.

That “message” failed to gain traction, and was quietly abandoned.

When doctors and public health officials began to speculate on the reasons for the horrendous burns suffered by the Farah victims, the U.S. military circulated reports that the Taliban had been known to use white phosphorous. That, too, was not substantiated.

The U.S. conducted an investigation, eventually conceding that 20 or 30 civilians may have died. The Afghan government rushed to announce that 140 civilians had perished, with President Hamed Karzai eager to use this latest outrage to bolster his own anti-American credentials.

The Taliban, meanwhile, had a relatively easy time of it, scoring a public relations coup as everyone from Secretary of State Hillary Clinton to the new U.S. ambassador to Kabul, retired Lieutenant General Karl Eikenberry, apologized for the killings and pledged to do better.

While the insurgents came in for their share of opprobrium for putting civilians at risk, the U.S. military absorbed most of the anger.

But Col. Greg Julian, spokesman for the U.S. forces in Afghanistan, is still trying to shift the blame.

“We still do everything we can to avoid civilian casualties, while Taliban extremists deliberately planned this event to create a civilian casualty crisis,” he said. He also tried to shift blame for the white phosphorous claim to the Taliban: “White phosphorous was not used by either side — but the Taliban tried to throw that out there to stir up more public outcry.”

The Taliban, for their part, continue to beat the anti-American drum.

“The Taliban never use civilians as shields,” said Qari Yusuf Ahmadi, spokesman for the Taliban, speaking by telephone. “We are here to defend the people, to defend their rights and their honor, to defend Islam. It is the foreigners who kill people.”

The Taliban spokesman could not refrain from what might be considered gloating.

“Everything is playing into our hands,” he said. “All Afghans now hate the foreigners. They are occupiers, who do not value people’s lives and honor.”

As propaganda goes, neither side quite has it mastered, at least according to the Afghans who are the ostensible target of the “stratcom” wars.

“What can we do?” said Abdul Manaan, a resident of Farah. “We cannot stand up to either side. They both have guns, they both use us as shields. What have we done that we should be the ones getting killed?”

Afghan hearts and minds: Is the U.S. military all talk?