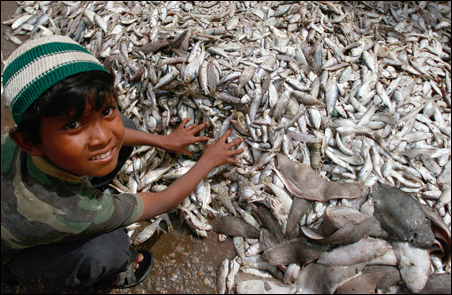 Athar Hussain/REUTERS
A boy works at a fishing harbour on the outskirts of Karachi, Pakistan.

KARACHI, Pakistan (Pulitzer Center on Crisis Reporting) — Sher Shah is a hard-working neighborhood — a confusing knot of cramped lanes offering up a riot of rattling power looms, puttering motors and booming furnaces. This rough suburb, with its garment factories, machine shops and scrap metal smelters far from the imposing cement skyscrapers of the city center, forms the industrial gut of Karachi.

It is where Nadeem Awan, a 16-year-old laborer, begins his day. He pulls up to an open storefront, parks his bike under a sky crowded with tangles of pirated electrical wires and faded political flags, and changes into his work clothes of a black T-shirt and jeans.

Nadeem has worked at this small machine shop, which produces tractor parts, for three years. Here he bends over a whirring lathe machine 10 hours a day, turning metal slugs into hundreds of bolts for domestic use as well as well as for export to Europe and the Gulf States.

The recent recipient of a raise, he now earns 60 rupees (75 U.S. cents) per day. This year he’s been joined at the shop by his brother, Naveed, who is 13.

And the Awan brothers are far from alone. Despite legislation outlawing the employment of children under 14, Pakistan is home to one of the largest populations of child laborers in the world. But just how many children are working remains a controversial number, especially as many of these kids are employed in informal sectors such as domestic work or agriculture.

“A government report says 3.3 million children are involved in child labor in Pakistan, of course that’s from 1996,” says Salam Dharejo, Regional Manager of SPARC, a Pakistani organization intent on eradicating child labor. “We think there are more than 10 million child laborers in Pakistan right now.”

For most of these underage laborers, getting a job — in most cases to provide for their families — means forgoing an education, but a small school in Sher Shah, the Children’s Development Center, is trying to change that.

“When we started the Development Center, we had a school in Sher Shah but we discovered that a lot of kids couldn’t attend it because they were working,” says Professor Anita Ghulam Ali, head of Sindh Education Foundation, the organization that runs the center. “And so we thought, ‘why don’t we start a proper center which is only for working children?’ “

The Center provides a new model of education designed specifically for 130 working kids. Flexible classes held in shifts that begin early in the morning and run until late at night accommodate manufacturing schedules.

A de-emphasis on truancy means that children are encouraged to show up simply as often as they can, to learn to read, write, even study English and develop basic computer skills. Showers and changing facilities are available to students who spend hours a day in hot, grease-smeared workshops before coming to class.

In addition, the center reaches out to employers, arguing that it is in their interest to help educate their underage workers.

“Though I am a technically minded person, I want these kids to go to school as well,” says Mubashir Zubair, owner of the machine shop that employs the Awan brothers as well as his own two sons.

The reality for the majority of Pakistan’s millions of child workers is a fair deal more harsh. Whether laboring in brick kilns, carpet factories, or even the kitchens of wealthy households, underage workers suffer abuse and other forms of exploitation, with employers paying little mind to their education or developmental needs.

International scandals — most famously, exposés in the 1990s revealing that soccer balls meant for European sports federations were being sewn by underage Pakistani kids — have led many to call for tougher action on child labor.

But in a country where nearly half the population is under 18, opportunities are few and acute poverty common, child labor seems inevitable even to those fighting for its abolition.

“There are laws in place that outlaw child labor, but the reality is that if these children aren’t working, their families are not going to be able to subsist,” Ali says. “If they implemented the laws tomorrow these poor families would be demanding compensation from the government for the lost wages of their children.”

For Awan, one of seven children in a family just scraping by each month, these motivations are painfully clear.

“I receive my salary at the end of the month,” Awan said, adding that “we have to use that money to pay for groceries we’ve bought on credit throughout the month.”

At 16, Awan is still just a seventh grader, having only attended three years of school, and balancing work and an education — which stretches his 10-hour day out another 3 hours at least. The pressure, he says, is worth it to become literate and have the chance to own his own machine shop someday.

However, he does think about how little free time he enjoys each day.

“After school my friends and I walk together. We have some juice and get to talk for 10 or 15 minutes,” he admits with a shy smile. “Then we go our own ways — they go home and I get back to work.”