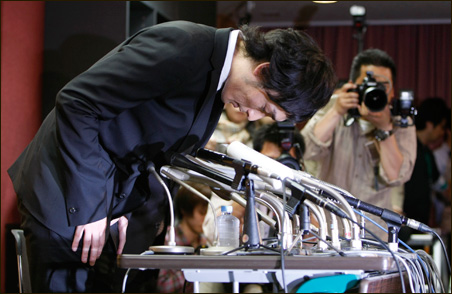 REUTERS/Yuriko Nakao
Tsuyoshi Kusanagi bows during a news conference in Tokyo on April 24.

TOKYO — Just a quarter of the way into 2009, Japan already has its celebrity scandal of the year.

The domestic media frenzy surrounding the arrest of Tsuyoshi Kusanagi, a member of the pop phenomenon Smap (Sports Music Assemble People), was such that it merited coverage in countries where almost everyone will have stopped to think, “Tsuyoshi who?”

But the almost comical circumstances surrounding his exploits late last month have become secondary to the fallout that the 34-year-old has had to endure at the hands of Japan’s self-appointed moral guardians.

Late last week, good sense briefly reigned when prosecutors decided not to press charges against Kusanagi after he was found naked by police officers in a Tokyo park in the early hours of April 23.

His prodigious beer and shochu consumption earlier the same night meant most of the details were lost forever in an alcoholic haze. What we do know is that, on being approached by officers, he asked them: “What’s so wrong with being naked?”

Kusanagi had, admittedly, woken nearby residents with his loud and incoherent ramblings, but beyond that, this was a case of a young man who had overindulged and deeply regretted it.

The Japanese public, both shocked and amused that the “quiet one” of the five 30-somethings who make up Smap — a band that has dominated music and TV variety programmes for almost two decades — refused to condemn their fallen idol. Almost to a man, besuited salarymen interviewed on Tokyo’s streets laughed off Kusanagi’s moment of madness, as if they were silently recalling sake-fuelled transgressions of their own.

TV reviewer Wm Penn, writing in the the Daily Yomiuri, described it as “the most widely watched drama” of the week, but asked, “Was it really such a big deal?”

Corporate and political Japan, on the other hand, showed itself to be woefully out of step with the man and woman on the Tokyo omnibus. In the 10 days since his arrest Kusanagi, who once commanded a reported 40 million yen ($405,000) per commercial appearance, has been deserted by his erstwhile sponsors.

Toyota, Procter and Gamble and other firms cancelled advertisements in which he appeared, while broadcasters said they were “reviewing” the future of a host of shows featuring Smap, including variety and cooking programs watched by millions on prime time TV.

Perhaps most ignominiously of all, Kusanagi was treated to a public dressing down by Kunio Hatoyama, Japan’s communications minister, who was apoplectic that the man chosen to encourage households to switch from analogue to digital TV over the next two years had behaved so shamelessly. And this from a politician who was nicknamed the “grim reaper” during his time as justice minister for the enthusiasm with which he signed execution orders.

In a final blow, the new face of digital broadcasting in Japan now belongs to a cartoon deer with antlers shaped like an UHF antenna.

While the cultural establishment dished out opprobrium, Kusanagi’s legions of fans were incensed. The blogosphere in Japan and South Korea, where his fluency in Hangul has helped turn him into a household name, lit up with encouragement for the fallen star and condemnation for his detractors.

Some were angry that their hero’s home had been searched (investigators found nothing), that he had been hung out to dry by his onetime corporate cheerleaders, even that he was arrested at all. One threatened to firebomb the police station where he had been kept overnight.

If the sorry episode demonstrated the unreasonable demands Japan’s cultural conservatives place on the country’s stars, it also exposed the toothlessness of its media.

Johnny’s & Associates, the talent agency that manufactured Smap and a host of other hugely popular stage acts, has exerted a stranglehold on TV scheduling that no broadcasting executive dare question.

The agency, founded by the septuagenarian starmaker Johnny Kitagawa, exerts absolute control over its young charges — many of whom debut in their early teens — in every matter from their image rights to their personal lives.

In 2000, the weekly magazine Shukan Bunshun put its head above the parapet and reported widespread allegations in tell-all books by former entertainers of sexual abuse by Kitagawa.

Though the (unproven) allegations were the subject of a police investigation, a parliamentary hearing and a libel suit against the magazine that was only partly successful, Japan’s mainstream media simply pretended not to notice, fearful that coverage would prompt an exodus of Johnny’s “talents” from their schedules.

As for Kusanagi, he will probably rebuild his career.

It will involve yet more public apologies and promises to change his ways. Japan’s media, meanwhile, will quickly regain its appetite for Smap’s saccharine fare and resume its fawning treatment of Johnny’s & Associates. And that, more than Kusanagi’s Tokyo fandango, is where the real scandal lies.

Naked, drunk and incoherent in Tokyo — enter the morality police