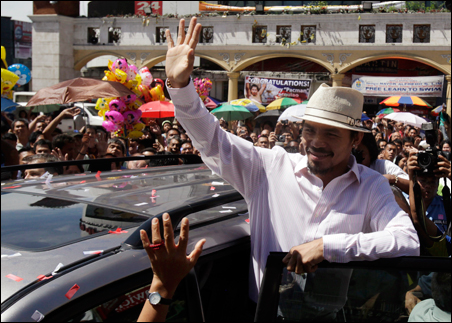 John Javellana/REUTERS
Filipino boxer Manny Pacquiao waves to his fans as he arrives to attend mass at a church in Quiapo, Manila.

MANILA — In a nation starved of heroes, Manny Pacquiao has become what one writer called a “multi-tasking hero.” He is considered more than the world’s greatest boxer: He embodies, it would seem, everything that Filipinos are hankering for these days.

People want Pacquiao to run for public office — for president, if possible. Officials want him to be a peace negotiator with rebels. President Gloria Macapagal-Arroyo just appointed him an “ambassador for peace and understanding.” The Philippine justice secretary named the boxer his “special assistant on intelligence matters,” whatever that means.

A week ago in Las Vegas, Pacquiao demolished Britain’s Ricky Hatton in the second round of a 12-rounder, a fight now widely regarded as one of the best in the history of the sport. When he flew home on Monday, he received a grand welcome unlike any ever received by a Filipino: His motorcade paraded through the streets of Manila, blue, white and red confetti flying endlessly, Filipinos by the roadside stretching out their arms, almost in supplication. Not even the pope’s visits to this deeply religious Catholic nation elicited such displays of admiration.

“I love you, Manny!” became a familiar shriek, echoing the country’s sentiments toward a 30-year-old man who, when he was a teenager, sold cigarettes to commuters in the streets of General Santos City, trying to support a family wallowing in extreme poverty — the typical Filipino experience. As for many Filipino youths, boxing proved a way out for Pacquiao.

People flock to his house in General Santos, a city in the south, and ask for financial help wherever he goes (he is now worth billions of pesos, having amassed more than $12 million from his recent fight). A recent report in the Philippine Daily Inquirer said that a woman shouted to him during Monday’s parade to please give her children.

One city wants to build a statue of him, which could be illegal in a country where monuments can only be dedicated to dead heroes. The Philippine postal system has printed his image on a stamp, making him the first athlete to be given the honor.

And Pacquiao’s singing career seems to be on the upswing: His CD is now a certified hit. When a Filipino singer was criticized for changing the notes of the Philippine national anthem he sang during Pacquiao’s fight, the boxer, as if to spite the critics, offered to sing it himself the next time he steps into the ring.

Pacquiao inspires as much hyperbole as awe. Lennox Lewis, the former heavyweight champion, wrote recently in Time magazine’s “100 most influential” issue, “The grip he holds over the Philippines is similar to Nelson Mandela’s influence in South Africa.”

Lewis added that Pacquiao, included on Time’s list, is “almost like a god” in the Philippines. Each time Pacquiao fights (he has won five titles from five different weight classes, a first for any Asian), soldiers and rebels stop fighting for a day, incidents of crime fall dramatically, and the streets stop heaving with traffic — stuff that otherwise happens only during Holy Week.

The Philippines has never had an athlete like Pacquiao. But many Filipinos contend that Pacquiao’s popularity obscures the problems that beset the country.

“Never in the history of boxing has a fighter been so admired and loved by his people and served as a single unifying force in a country that regrettably resonates with divisiveness,” sports analyst Ronnie Nathanielsz told Newsday.com.

Apart from possessing the world’s deadliest left hook — the one that landed on Hatton’s chin, knocking him unconscious before he even hit the canvas — Pacquiao also has a golden touch, politically speaking. Politicians swarm all over him; they take every opportunity to be photographed beside him. (These pictures later appear in campaign posters and literature.) The few politicians he has endorsed during past elections have won hands-down.

He is not just the king of the ring — he has become a kingmaker of sorts in a political landscape that values personality over ideology.

Pacquiao’s series of victories has provided the unpopular Arroyo administration with several public relations bonanzas, as the latest win over Hatton did this week.

“Did Hatton hurt you?” Arroyo asked Pacquiao during his courtesy call to the president on Monday. “Not so much,” Pacquiao replied, and quipped, “He could not take the punch of the Filipino nation.”

For a country enduring seemingly never-ending scandals involving corruption and politics, Pacquiao is a respite. Since his victory over Hatton, Filipinos have forgotten about these many scandals. He has dominated the press so thoroughly, boxing out other events, news and issues.

Most believe that it is impossible not to feel extreme pride about Pacquiao. “You can’t be a Filipino,” wrote the columnist Conrado de Quiros, “and not marvel at the marvel Pacquiao has become.”