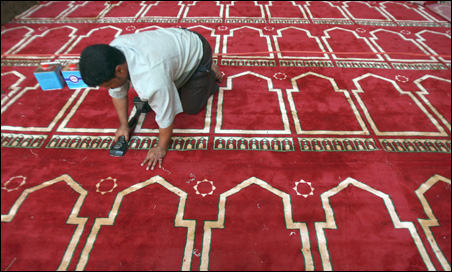 REUTERS/Amr Abdallah Dalsh
A worker puts down new carpet at the Sultan Hassan Mosque, in the old Islamic area of Cairo, in preparation for President Obama’s visit to the Egyptian capital.

CAIRO — President Barack Obama travels to Egypt this week to fulfill a campaign promise to address the Muslim world.

The president will spend Wednesday in Saudi Arabia and land in Cairo on Thursday before heading to France and Germany.

In the several hours he’s likely to be in Cairo, observers expect to hear him extend an olive branch to Muslims, boost Egypt’s status as a regional leader, stare down extremism, and make progress on the Israeli-Palestinian conflict.

All in a day’s work for the man who once jokingly referred to himself as Superman.

Obama has decided to fly into the region at a time of deep crisis. Gaza lies in ruins, the Pakistani government remains unstable, Hezbollah appears set to win elections in Lebanon and Iran continues to rattle the saber. Terrorist threats abound and Obama is banking on the fact that words still count.

Obama has chosen to speak at Cairo University in the heart of the city.

Unlike Al-Azhar University across town, which is a hub of Islamic scholarship in the Middle East, Cairo University is better known — or perhaps notorious — for its political legacy, having graduated Saddam Hussein, Yasser Arafat, Boutros Boutros-Ghali, and Naguib Mahfouz.

Egyptians, meanwhile, are unabashedly quick to note that their country was the obvious choice for Obama to visit.

“I am not surprised [Obama chose Egypt] because we speak about Egypt as very important to the U.S.,” said Diaa Rashwan, a scholar at Egyptian think tank Al-Ahram Center.

Street-level buzz has gone through the roof as Obama’s visit approaches. And few hold back when it comes to expressing what they think Obama ought to be talking about.

“He must address the Israeli-Palestinian crisis because it’s the most important issue in the region,” Ahmed Ibrahim, a veteran taxi driver in Cairo.

Others have listed Iraq, Sudan, and terrorism as top priorities. Sudan, of course, lies just south of Egypt and political instability there has led refugees to flee to Egypt.

Obama will also have the opportunity to meet with Egyptian President Hosni Mubarak. Mubarak was scheduled to visit the U.S. last week but abruptly canceled his trip in the wake of his grandson’s death.

Mubarak has been mostly mum about the new American president, but many suspect that the Egyptian leader, who had a cold relationship with former president George W. Bush, would like to develop warmer ties with Obama. Various deputies, speaking on Mubarak’s behalf, have been quick to laud Obama’s trip.

Not everyone in Egypt, though, is so enthusiastic about Obama’s visit.

The Muslim Brotherhood, the leading Islamist party that, though officially banned, holds roughly a fifth of the seats in the parliament, has taken a skeptical stance on the visit.

In a recent interview with GlobalPost, Essam el Erian, one of the movement’s leaders, brushed aside Obama’s trip, saying it lacked substance.

“With regard to Obama’s slogan of change,” he said, “so far we haven’t seen any change: the American soldiers are still in Iraq, the U.S. is supporting the Pakistani government … And there is still the Palestinian case. We will not ignore the right of return issues and the removal of all the settlements.”

The Obama administration’s decision to stick with Egypt as the stage from which to address the Arab world is not without diplomatic risk. The most populous Arab country has this year seen its fortunes as traditional regional leader fade after it supported the Israeli-led, U.S.-backed bombardment and blockade of Gaza earlier this year.

Egypt, which has been at peace with Israel for over 30 years, is no longer widely thought to be a credible mediator in the wake of the Gaza conflict, and some have questioned its ability to be a leader in an Obama-led Arab-Israeli peace process.

“After the Gaza war, Egypt’s position was very bad. But Egypt can recapture the role by working on Palestinian-Hamas-Israeli negotiations. It’s starting to come back now,” Rashwan said.

The Egyptian regime, too, will be hoping to bask in Obama’s reflective popularity. It could use the boost.

But with 80 million people, a historical legacy of regional leadership, and a position of geographic importance, Egypt will always be a player in the region.

“We have a nation today” Rashwan said, “that’s dealing with the region’s real problems: the Sudanese issue, the Israeli-Palestinian issue, etc.”

American presidents have long had a warm welcome in Egypt. However, as popular as Obama may be here, many in Egypt have long expressed a deep respect for another Democratic president: Jimmy Carter.

Carter visited Egypt during his presidency as part of an aggressive diplomatic push in the region. As the story goes, a camel dealer got to Carter during a tour through Cairo and gave him a camel as a gift. It was a sign of abiding respect for America’s 39th president.

Carter didn’t bring the camel back to the U.S. with him, instead leaving it in Egypt to live out its days as Carter’s Camel.

The Secret Service may not allow any camel-bearing well-wishers near the 44th president, but he’ll have to hit many correct notes and tackle an ambitious agenda if he has any hope of creating the legend of Obama’s Camel.