BOSTON — It is, by now, strictly routine for the NBA draft to feature prominently an international cast. Since the year 2000, when Turkish star Hidayet Turkoglu was the top foreigner drafted, 43 foreign players have been selected in the first round.

Among the headliners at Thursday night’s draft will be 7-foot, 3-inch center Hasheem Thabeet, who was born in Tanzania and starred at the University of Connecticut, and Spanish whiz kid Ricky Rubio, the 18-year-old point guard who starred on the Olympic team that gave Kobe, LeBron and company a run for the gold in Beijing. And 2009 also could witness the first Israeli player, Omri Casspi, to be taken in the first round.

But the most intriguing foreign development will involve a 19-year-old point guard from Los Angeles named Brandon Jennings.

Jennings was considered one of the nation’s best prospects from the class of 2008 after he averaged more than 35 points a game at Oak Hill Academy in Virginia. Precluded from entering the NBA draft by the league’s minimum-age restrictions, Jennings made an unprecedented leap, at least since the NBA closed its doors to newly minted high-school grads. Instead of pursuing the now familiar one-year-and-out option at an elite college basketball program, Jennings signed a pro contract to play in Italy. (He had been expected to attend the University of Arizona, but was having difficulty meeting the academic requirements.)

Jennings said he was convinced that the boy-against-men experience in Europe would better prepare him for the rigors of the NBA than college ball or a domestic minor league. And certainly nobody could dispute the fact that his basketball and endorsement earnings, estimated at more than $1 million the past year, were far more than he could have reaped at even the most renegade college program.

Already this year, Jeremy Tyler, a 6-foot, 11-inch center from San Diego, has one-upped Jennings. Tyler, regarded as a potential top pick in the 2011 draft, announced in April that he plans to skip his senior year in high school and play pro ball in Europe for the next two years. 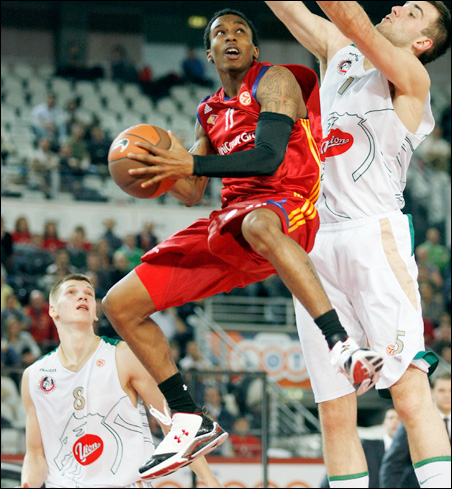 But while Tyler is heading overseas, Jennings is already home. And his Roman tenure can hardly be regarded as an unqualified success. Jennings played sparingly — only about 17 minutes a game — with Lottomatica Roma, a middling Italian team, and averaged only 5.5 points and 2.2 assists. The question now is did he help himself, as he believed he would, or did he, by facing pros, expose the flaws in his game before inking a fat contract with the NBA? And if indeed the latter, will he slip far enough in the draft to cost him far more than that fat year’s earnings in Europe.

Before he departed for greener shores, Jennings was considered a lock to be a top 10 draft pick, maybe even a top fiver. Now if you check out the mock drafts that try to make a science, or at least some sense, out of raw basketball talent, there is a no longer a consensus on Jennings. My own survey of a dozen mock drafts in the basketball blogosphere showed him going as high as fourth (to Sacramento) and as low as 17th (to Philadelphia); three prognosticators had him headed to Minnesota on the sixth pick, another three had him booked to Indiana with the 13th.

The difference between fourth and 17th, or even sixth and 13th, is more money than most folks will make in a lifetime. The European option has already diminished because of recessionary factors as well as Jennings’ lack of bang for his bucks. If he winds up on the shorter end of the NBA money for having chosen it, that door may be completely shut.

America’s most talented young hoopsters may not always be academic superstars, but most of them can add up millions. They may decide it is better to maintain the home-court advantage and remain in the more comfortable, as well as more flattering, limelight at home.