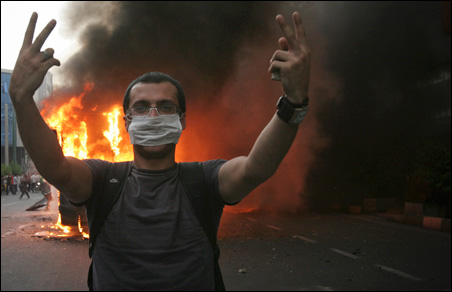 TEHRAN — The third day of protests over Friday’s presidential election dawned with heavy clouds rolling over Tehran and premonitions that protests over alleged vote-rigging in the Iranian elections were about to breathe their last.

As with previous days, my morning was punctuated by telephone calls by friends wanting to know the latest on the opposition rally by presidential contender Mir-Hossein Mousavi that was scheduled to take place in central Tehran’s Revolution Square. (According to news reports, the rally was postponed after Iran’s Interior Ministry said the rally would be illegal. Hundreds of people reportedly rallied despite the ban.)

Other reports continued to trickle in. Just as worrisome as news that paramilitaries had entered Tehran University’s student dormitories and beaten up students (recalling the conclusion of the July 1999 student riots), was news that foreign journalists were being harassed and asked to leave the country. “Their permits are no longer valid, even if still unexpired,” an Iranian official told me.

A spokesman for the Swedish network SVT, Geronimo Akerlund, was reported as saying that their reporter, Lena Petersson, had been asked to “leave Iran as soon as possible because the elections are over.” European Union embassy officials said that they couldn’t protect journalists who are arrested by the Iranian authorities, bringing to mind the case of Iranian-American journalist Roxana Saberi, whose American nationality was of no help when she was recently arrested and charged with spying here.

Dubai-based news network Al Arabiyya said the station’s correspondent in Tehran was given a verbal order from Iranian authorities that the station’s office would be closed for one week, with no reason offered. The station is popular among ethnic Arabs in Iran’s Khuzestan province.

The place where the Mousavi rally was scheduled to take place was particularly significant because Tehranis gathered there for anti-Shah demonstrations during the 1978 to 1979 revolution. Since then, the regime has used Revolution Square as a staging area for annual revolution rallies that begin there and end on Freedom (Azadi) Square.

Mousavi supporters have taken another page from their parents’ revolutionary songbook: Every night they cluster on rooftops and shout “Allahu Akbar,” in an eery echo of the last days of the Shah. This time, however, they are summoning an end to the Islamic Republic that succeeded the previous regime.

Mousavi has alleged that the presidential election was rigged, and he called for its annulment after official results gave  Mahmoud Ahmadinejad almost two-thirds of the vote. Official results were announced after a record election turnout and were reportedly counted by election officials in a few hours.

“Sepah (Revolutionary Guard) is deploying soldiers around (Revolution) square and they’re getting ready to crack down hard,” said a student activist who spent the night away from his dormitory after Bassij paramilitaries stormed another dormitory belonging to Tehran University.

The last time Iran faced widespread demonstrations was in July 1999, when then-President Mohammad Khatami refused to heed protesters’ demands for reform of the Islamic Republic, and stood by as riot police cracked down and left a generation of reformists feeling betrayed.

The current demonstrations are larger in scope and are spread across Iran. But after the arrest of an estimated 170 activists on Saturday night, these demonstrations are also lacking an organizational structure. “These crowds are spontaneous, sporadic, have no structure to their action and it’s going nowhere. It’s an internal affair, that’s all,” said one analyst.

The regime is concerned that the election result has not been ratified by the Guardian Council of the Constitution, a body composed of six clerics and six jurists that is charged with supervising elections and approving candidates for several government bodies.

Ahmadinejad’s allegations of clerical corruption have made him unpopular in some religious circles, as was evidenced by a clerical group’s statement requesting an annulment of the ballot.

“On the legal side we have to see what the Guardian Council says. If they ratify the election there’s no way of going back, aside from serious and violent confrontations,” said another political analyst.

(Iason Athanasiadis is reporting from Iran on a grant from the Pulitzer Center on Crisis Reporting.)