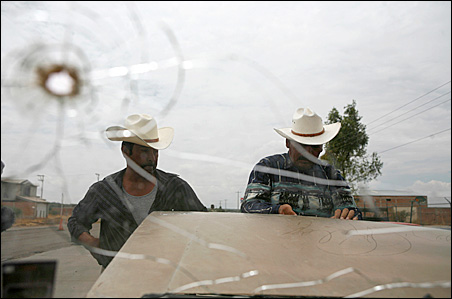 REUTERS/Tomas Bravo
Men are seen through the bullet-riddled windshield of their truck at a military checkpoint in Ciudad Vicente Guerrero in northern Mexico last month.

LAREDO, Texas — 2003 was a very bad year across the Rio Grande in Nuevo Laredo. But it was a very good year for Mando’s Guns and Ammo in this southern Texas border city.

As open warfare between rival drug cartels filled the streets of Nuevo Laredo with bodies, Armando and Diana Villarreal, owners of Mando’s, prospered from a sharp sudden spike in demand for AK-47 semiautomatic assault rifles.

“We were selling in quantity,” recalled Diana Villarreal, who took over the store after her husband died in late 2006. “We weren’t getting rich, but it was nice to have money to buy extra things.”

Federal agents, though, eventually traced more than 50 AK-47s recovered after battles in Nuevo Laredo to Mando’s.

In October 2006, Villarreal died of cancer just before federal prosecutors could make an example of him as perhaps the first federally licensed firearms dealer to be indicted for crossing the legal line into weapons trafficking, U.S. Alcohol, Tobacco, Firearms and Explosives officials confirm. There have been no publicly known successful gun-smuggling prosecutions of licenced retail gun dealers since.

The Obama administration is currently rushing hundreds of ATF agents to the Mexico border with orders to halt the illegal transport of guns to Mexico. The agents are the administration’s response to years of pleading from the Mexicans for a crackdown on the smuggling of over-the-counter U.S. arms to the country’s ruthless warring drug cartels.

But unless the slow rate of prosecutions picks up — which is unlikely — the agents will be left to go after shadowy so-called “straw buyers,” those who are paid to purchase weapons from licensed dealers and then hand them over to others who don’t meet the legal purchasing standards.

America’s gun retailers will continue to enjoy some measure of insulation because of scant legal requirements on sales, as well as a high burden of proof that a retailer actually knows ahead of time where the guns are headed.

Under U.S. law, gun retailers are only required to ensure the buyer is an adult legal U.S. resident and clears an FBI background check administered on site.

The unavoidable reality is that these legal circumstances enable American gun merchants, even the majority who are truly unwitting about the ultimate destination of their products, to profit from Mexico’s drug war.

Washington, D.C.,-based Special Agent Leo Lamas, who until recently oversaw the U.S. Immigration and Customs Enforcement’s new anti-smuggling program Armas Cruzadas, said catching a licensed dealer knowingly supplying guns for trafficking is tough because a retailer would only have to administer the background check, then deny knowledge of anything illegal.

That’s one reason why buyers wielding thousands of dollars in cash are able to walk out of any U.S. sporting goods store with multiple assault-style weapons, no questions asked.

“I can’t stop someone from buying a gun, and then three weeks later giving it to someone else,” said Jim Cain, a former manager who works part-time at Fine Gun Shop at Bass Pro Shops in North San Antonio. “We can only control what’s within our facility.”

The ATF has traced nearly 23,000 weapons seized from Mexican cartels to the United States, a relatively small percentage of the total numbers taken in Mexico but still a strong indicator of where many of the untraced guns are coming from. The vast majority of traced Mexican crime guns originate in Texas, which has a lax sales environment and more gun retailers than any border state.

To be sure, many gun sellers say strong moral qualms about the crimes being committed by cartel gunmen have prompted more care. Many south Texas retailers interviewed by GlobalPost insist they’ll turn down money from suspicious buyers, though this risks alienating legitimate customers and reducing perfectly legal revenue.

Such claims can’t be independently corroborated, and no one expects a gun seller to consistently turn away business on just a hunch. But on occasion, retailers have called the ATF right after legally selling to someone they considered suspicious, and later produced sales records to responding agents.

“The vast majority of dealers are very cooperative with us,” said ATF Special Agent Mark Seibert, who heads an anti-trafficking group in San Antonio.

Nonetheless, some dealers have found it more profitable to do nothing more than required, or in rare cases, to go all in with the drug cartels.

Villarreal of Mando’s Guns was a colorful personality well known around Laredo as a jack-of-all-trades. He once had a local television show about hunting.

Things started going wrong, according to his wife, the ATF and a local attorney, when a man with links to Mexican organized crime named Carlos Guajardo came into the store sometime in 2002. Guajardo, a twice-convicted drug felon who is now serving three years in federal prison on firearms charges, was polite, charming, tall and in need of AK-47s, Diana Villarreal recalled.

But Guajardo’s convictions disqualified him from doing the buying.

Soon, however, a variety of young, clean-cut men with no criminal history began parading into the store with cash and walking out with five, 10 or more AK-47s each, plus lots of 9mm semiautomatic handguns. All the sales were perfectly legal under the law — so long as the Villarreales didn’t know they were being purchased for someone else.

“Once you get that background check, they pay you and that’s it,” Villarreal said.

The sales to the young men went on for nearly two years.

“We were really, really close to putting things together,” said ATF Special Agent Elias Bazan, who oversaw the Laredo office at the time and now works in McAllen. “An incredibly disproportionate number of these weapons were traced to him. He sold literally hundreds and hundreds of AKs and they’re still out there, and they’re going to be recovered for a long time to come.”

Across the river in Nuevo Laredo, meanwhile, open warfare between the Gulf and Sinaloa cartels was producing a sorry bounty of hundreds of bodies. Villarreal, who maintains that her husband primarily ran the business, wondered whether their guns were involved but didn’t ask her husband any penetrating questions.

“It really didn’t feel good at all,” she said.

In the end, increasing visits by ATF agents asking about why their guns kept showing up at murder scenes across the river made the decision easy. Under pressure in 2004, Villarreal decided to give up his federal firearms license and devote himself full time to his race car and hunting guide businesses.

He left the store’s remaining firearms stock to Diana as a private collection. Under the law, she could sell it off without requiring background checks — although she was not required to, she kept detailed records for the ATF.

But even her situation as a widow selling off her dead husband’s guns to pay the bills underscores the tenacity of Mexico’s demand for guns, and how porous the border is.

She said one of her husband’s most prized possessions, a “beautiful, beautiful” AR-15 assault-style rifle replete with engravings, had to be sold. She said she thought she knew the man she sold it to pretty well.

Not long afterwards, the ATF came calling, just like old times. That AR-15 was recovered in Mexico from a gang of cartel thugs who’d been caught during a traffic stop.