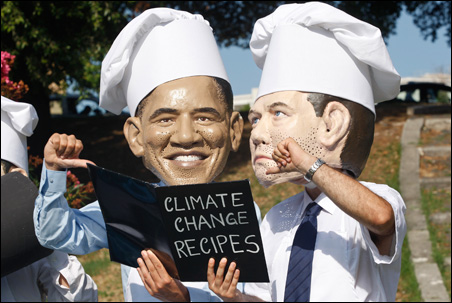 ROME — The ground seems to have fallen out from under climate negotiations being conducted on the margins of the G8 summit.

Representatives from 17 of the world’s most polluting countries who met Wednesday were expected to agree to halve their contribution to global warming by 2050, with richer countries committing to steeper cuts. The economies gathered account for 80 percent of the globe’s greenhouse gas emissions.

But China and India are said to have balked at joining the global effort to combat climate change unless industrialized countries pledged faster and deeper emissions cuts.

According to Italian Prime Minister Silvio Berlusconi, the host of the meeting, definitive cuts faced “strong resistance” from the Chinese delegation.

The stalemate is a step backward for efforts to forge a successor treaty to the Kyoto Protocol in Denmark later this year. It illustrates the major challenge in crafting the global compact: deciding who is responsible for what cuts.

Barring a diplomatic breakthrough when heads of state meet this week in the earthquake-struck city of L’Aquila, officials are likely to agree only that global warming shouldn’t be allowed to exceed 2 degrees Celsius (3.6 F), the point beyond which many fear the Earth will begun to undergo physical changes — such as the warming of the oceans or the melting of arctic permafrost — that would perpetuate global warming.

What they can’t agree on is how to stop that from happening.

Even going into negotiations this week, officials hadn’t decided what any potential cuts would be measured against. United Nations scientists working for the International Panel on Climate Change use global emissions in 1990 as a base level.

Washington and Tokyo, however, have been measuring proposed cuts against 2005 levels. During the interval between the two dates, emissions in the U.S. grew by 23 percent, which has significant implications for the ultimate target.

In Italy, China and India were said to have insisted that developed countries commit to cuts of 40 percent by 2020. In comparison, the climate change bill that barely squeaked through the U.S. House and faces stiff opposition in the Senate sets a target of a 17 percent cut from 2005 levels by 2020. Were one to use the 1990 baseline, the legislation would mandate a 5 percent reduction.

But the biggest disagreement lies over whether countries should be held responsible for the greenhouse gases that have already been released into the atmosphere.

India has argued that just as industrialized countries such as the United States, Germany, Japan and the United Kingdom achieved their current levels of wealth through the burning of coal and oil, poor countries need either fossil fuels to lift themselves out of poverty or significant funding in their place.

“They’re very wary of taking on international commitments unless there’s some real support for them as a quid quo pro,” said David Waskow, director of Oxfam America’s climate change program.

“The greenhouse effect is not caused by emissions,” Miguez told Reuters last week. “It is caused by the accumulation of emissions in the atmosphere.”

He added that China, India and South Africa would back the Brazilian proposal.

Ultimately, the adoption of such an approach is unlikely. But its implication — rich countries would be asked to cut emissions by more than 100 percent, something that could theoretically be achieved by funding mitigation efforts elsewhere — are a signal of just how wide a gap remains to be bridged.