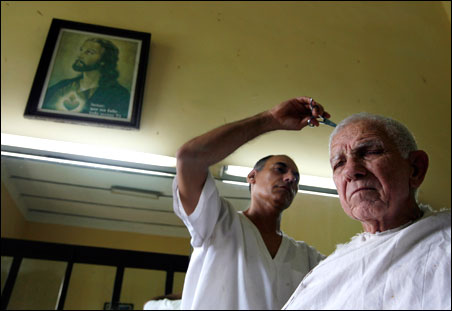 REUTERS/Enrique De La Osa
A man gets a haircut at the Santovenia Asylum in Havana, July 6, 2009. The asylum is run by nuns who belong to a congregation called “hermanitas de los ancianos desamparados” or “sisters of the unattended elderly.”

HAVANA — This country reached a tipping point in 2006. It wasn’t any one event in particular, but according to Cuba’s Office of National Statistics, the island’s population of 11.2 million stopped growing that year, and dipped slightly. And it has been falling ever since.

Cuba’s population is projected to decrease by 100,000 by 2025, and the arithmetic behind that decline is a simple matter of subtraction: More and more Cubans are leaving the island, and Cuban mothers are having fewer children. The country’s fertility rate of 1.4 children per woman ranks as the lowest in Latin America.

The statistics highlight a risky demographic experiment that has been developing here for years.

While Cuba’s socialist health care system takes good care of the elderly and has prolonged life expectancy rates, the island’s lousy economy — squeezed by U.S. trade sanctions and its own inefficiencies — is driving young people to emigrate, while limiting family size.

As a result, senior citizens will be one of the fast-growing sectors of Cuba’s population in the coming decades. Life expectancy in Cuba is now 75 years for men and 79 for women, roughly on par with the United States, where those figures are 75 and 80, respectively, according to United Nations statistics. By 2025, according a recent article on the topic in Cuba’s communist newspaper Granma, 26 percent of Cubans will be 60 or older — the highest percentage of seniors in Latin America.

This, according to Granma, should be viewed as a success, rather than a burden: “Analysts agree that the aging of country’s population shouldn’t be seen as a negative thing, but as an achievement of the political, economic, and social systems that provide longer lives and better quality of life.”

But the presence of many elderly Cubans selling goods on the streets or doing odd jobs is a reminder that Cuba’s pension and social security system fails to provide for many who reach retirement age here.

“I’ve got no other choice,” said Antonio, an 80-year-old retired butcher selling plastic bags, cigarettes and government-rationed toothpaste at an outdoor market in one of the capital’s more run-down neighborhoods. He said his social security payment from the government was 200 pesos a month, or about $9. “It’s not enough to live on,” said Antonio, fanning himself with a piece of cardboard on a sweltering morning.

Under Cuba’s socialist system, Antonio’s housing, utilities and other basic needs are all subsidized by the government. But with the island’s population declining, there will be fewer working-age adults whose labor can support such a system in the future.

Cuban families are generally small, partly as a result of the country’s low wages and persistent housing shortages. But the social and cultural advancements of Cuban women in recent decades are another reason that the island’s birthrate is on par with that of many European countries. Birth control and abortion services are free and widely available, and despite generous maternity benefits, many Cuban women are professionals who choose to delay childbirth.

Women accounted for 65.6 percent of the island’s professional and technical workers in 2007, according Cuba’s state-run media.

Concerned by these demographic trends, the Cuban government has created a task force to promote larger families, but unlike some European countries with similar programs, it can’t afford to offer much in the way of material incentives.

Then there is the other major drain on the island’s workforce: An increasing number of Cubans, many of them young people, are leaving.

The number of Cubans who emigrated in 2008 reached 36,903, according to Cuba’s National Statistics Office, the highest one-year total since the 1994 rafter crisis.

The actual figure may be even higher, as some 49,500 Cuban immigrants became U.S. permanent residents last year, and significant numbers of Cubans are also going to Spain and other Latin American countries. So many Cubans have arrived in Ecuador recently that the country changed its laws to screen out the fraudulent marriage arrangements that have been used by thousands to gain residency there.

The brain drain of many of the country’s best-educated and most productive workers is a phenomenon Fidel Castro has likened to “brain theft,” and the government tries to stem the process by requiring Cubans to apply for permission to travel outside the country. But with the island’s anemic economy further weakened by the global recession, the outflow is likely to continue.