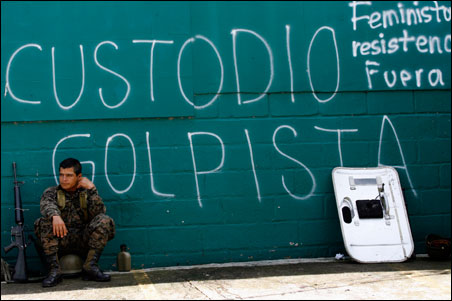 REUTERS/Oswaldo Rivas
A soldier rests near the presidential house in Tegucigalpa July 1, 2009. The Honduran interim government defied international pressure on Wednesday and vowed there was “no chance at all” of ousted President Manuel Zelaya returning to office.

TEGUCIGALPA, Honduras — Flanked by soldiers, amid a huddle of blue-and-white Honduran flags, the bespectacled de facto president of Honduras, Roberto Micheletti, raised his hands to supporters and gave his best war talk.

“No other nation can interfere with our destiny,” he said to a thunderous cheer. “In this country, we are seven-and-a-half million soldiers.”

Micheletti’s speech at the rally June 30 illustrates his increasingly radical line since being sworn into office after the elected president, Manuel Zelaya, was flown out of the country at gunpoint.

The international community has united in condemning the June 28 ouster of Zelaya and refusing to recognize the Micheletti administration.

On Wednesday morning, the Organization of American States gave Honduras an ultimatum: Reinstate Zelaya within 72 hours or be expelled from the organization.

But in every action taken and statement made, the silver-haired Micheletti has signaled that he won’t budge an inch, even if it means turning Honduras into a pariah nation facing crippling sanctions.

And there are no signs of any cracks in the alliance backing the new regime, which includes almost the entire Congress, the Supreme Court and the army.

Such a hardline position raises the specter that the first Central American coup in almost two decades will lead to a return to the violence that dogged the region during the Cold War.

Military checkpoints and curfews have already become a grim routine in this sweltering Central American capital.

Meanwhile, Zelaya loyalists have been taking to the streets in the hot afternoons, repelling attacks of tear gas and baton charges from police and soldiers.

The exiled Zelaya himself is no hardline revolutionary. A 56-year-old rancher, he took power in 2006 after a centrist campaign for the Liberal Party.

However, he soon formed a close alliance with Venezuela’s Hugo Chavez and began to imitate his popular tactics: giving social programs to the poor and blaming the nation’s problems on the rich oligarchs — whom he dubbed the “elite group.”

His policies, such as raising the minimum wage by more than 50 percent, won him applause from the nation’s impoverished majority.

“In this country, the rich have always robbed from us,” said Raquel Huerta, a 39-year old factory worker, marching down the street chanting “Zelaya” at an impromptu rally. “And when we finally got a president who gave something back to us, they took him away.”

Detractors of Zelaya say his policies and rhetoric drove a polarizing wedge through the country of banana plantations and sweat shops.

“He became a hardline communist. He wanted to turn Honduras into a country with a Soviet-like system,” said Carlos Joya, a 22-year old student attending the Micheletti rally.

As the global recession hammered Honduras and crime kept rising, the establishment moved firmly against Zelaya.

The flashpoint came in June when he called for a nonbinding referendum on changing the Constitution to allow presidents to run for a second term.

His detractors said he was trying to become a dictator. The Supreme Court ruled the vote illegal.

When Zelaya said the vote would go ahead anyway, soldiers went into his house at the crack of dawn and flew him out of the country in his pajamas. Micheletti, the house speaker, was sworn in hours later.

The next few days are crucial.

Zelaya has said that even if Micheletti defies the OAS demands, he will travel to his home country. Micheletti has responded by saying that he will arrest Zelaya if he steps foot in Honduras, adding accusations that Zelaya worked with drug traffickers moving cocaine to the United States.

Zelaya does not command the same organized support as Chavez, who built a network of barrio groups to move and organize his militants, helping him survive an attempted coup in 2002.

As a result, most of the protests in Honduras have been spontaneous and disorganized, with small groups holding their own different marches that are easily broken up by police.

However, there are signs that Zelaya’s supporters are becoming increasingly radical in facing the hardline position of the new regime.

On Tuesday night, two homemade bombs were heard echoing through streets of the capital, although they did not cause damage or injuries.

“I hope to God that it won’t, but it seems like this conflict will end in bloodshed,” said Nelson Garcia, a 35 year-old restaurateur, watching the Micheletti supporters applaud the coup. “These people are playing with fire.”