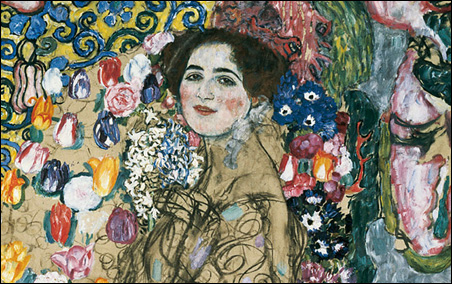 REUTERS/Kunstmuseum Lentos Linz
A detail from Gustav Klimt’s painting of Ria Munk. Government officials, non-governmental groups and Jewish representatives have been meeting in Prague to review current practices of restitution of artworks confiscated by the Nazis during World War II.

PRAGUE — With little more than paper, pen and her own detective skills, Miriam Friedman Morris has been on a personal mission for nearly 30 years to track down a lifetime’s worth of her father’s artwork that was plundered by the Nazis.

David Friedman was a prolific, if not famous, artist whose portraits were published in more than 250 German newspapers before World War II, according to his daughter. After Kristallnacht — the night of broken glass in November 1938 — Friedman fled Berlin, with his wife and infant daughter, for the Czech capital.

“Growing up I was always intrigued with his pre-war life and what became of his artwork in Berlin and in Prague,” she said. “After his death (in 1980) I began to read his diary and found small clues that I might actually be able to find something.”

Speaking on the sidelines of a five-day conference dedicated to the restitution of private property — real estate, art and personal assets — that was stolen or confiscated by the Nazis, Friedman-Morris said she found a trove of her father’s work at the Jewish Museum here in Prague.

But if you thought a Jewish Museum would be more accommodating than a non-Jewish entity when it comes to returning property claimed by a Jewish heir — think again.

“The museum is not forthcoming when they ask for credible evidence, when they know that’s not possible,” she said. “For the most part I can’t prove if the work was stolen, confiscated, or whether (my father) sold them — because he was a successful artist.”

The museum’s website lays out in meticulous detail how one goes about making a restitution claim. And at first glance it seems that the Czechs are ahead of the game, at least compared with their European neighbors.

A law passed in 2000 states that, “Artworks taken from individuals in the period between 29 September 1938 and 4 May 1945 as a result of a transfer or transfers of ownership which were declared invalid by Presidential Decree … shall be transferred free of charge into the ownership of the individual who owned them prior to dispossession.”

But the burden of proof rests entirely upon the heir. The old adage that “possession is nine-tenths of the law” was, perhaps, never more true than here. The museum is also unable to offer proof that it is the rightful owner, according to Friedman-Morris.

“There is no such thing as a bill of sale,” she said with a faint laugh. “The information about the confiscations (of property) is slim to none.”

So, for now, her father’s art work continues to languish out of sight in the museum’s storage room. No one from the museum could be reached for comment.

There are thousands more cases — each with their own variations, but broadly similar to that of Friedman-Morris. She, in fact, is luckier than many because her father’s diaries gave her clues as to where to look. Others don’t know where to begin their search.

A declaration passed at the conference, and signed by 46 participating states, calls on signatories to, among things, expedite the opening of archives to help victims and their heirs locate property; pass laws to ease the bureaucratic transfer of property; and make funds available to compensate for lost property; and help those who are struggling economically.

They’re all the “right things.” Except that it’s all non-binding, which means that there is no legal force behind it, just like the first such conference in 1998. The focus then was more on communal property, and the resulting “Washington Principles” sought to cajole governments to return stolen property without the force of law. As a result, most countries ignored their commitments.

Ironically, the result has been that Germany and Austria have paid out billions of dollars in compensation, but their East European neighbors, who view themselves as Nazi victims, have generally refused to make amends. No one questions that Germany’s neighbors were also victims, but Holocaust restitution advocates point out that much of the looted property and art is believed to be in government hands today.

Stuart Eizenstat, who is leading the U.S. delegation, estimates that the Nazis plundered $17 billion — which would be worth $170 billion today — worth of movable and immovable property from Jews, Gypsies and other ethnic or social groups they targeted.

“The Holocaust was not only the greatest genocide in history, it was also the greatest theft in history,” Eizenstat said in an interview. “We’re also focusing on social needs of 170,000 survivors, a third of which are at or below the poverty line. It’s unacceptable that people who suffered so much in their early lives should now have to live in deprivation and choose between food and medicine.”

He also lauded the proposal to establish the Terezin Institute, to be located at the site of the former concentration camp, which he said would be tasked with developing restitution and compensation guidelines for regional countries.

One advocate for the Holocaust victims made it clear that he would very much prefer a binding declaration to a non-binding one. But he insisted the conference is still important “because it forces people to dance,” he said, explaining that the conference creates social pressure for action.

Holocaust survivor and Nobel Peace Laureate Elie Wiesel said in an interview with GlobalPost that the time to act is now.

“Restitution is absolutely urgent now because it’s 65 years after the event, which as I said during the conference, I found scandalous — that it took so long to deal with this problem,” he said. “I hope that now that at least many needy survivors will benefit from it and that all artwork will be returned, and at least, at least that justice should prevail.”

Restitution of art looted by the Nazis takes on new urgency