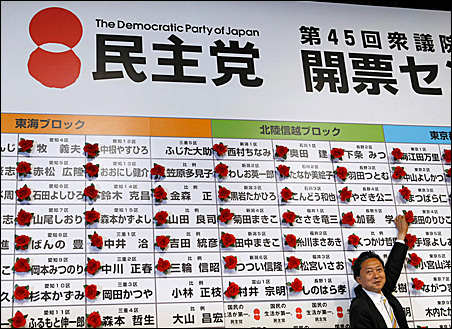 TOKYO — The Democratic Party of Japan (DPJ) has won a historic landslide victory while the Liberal Democratic Party — which had ruled for over half a century almost uninterrupted — suffered a crushing defeat, losing nearly two-thirds of its seats in the House of Representatives.

The DPJ now has more than 300 parliamentarians in the more powerful lower house while the Liberal Democratic Party (LDP) has been reduced to 119 seats.

“The Japanese people are slow to change; but once they decide to do something, they can move very quickly, as you’ve seen tonight,” said Takashi Koyama, visiting professor of politics at Akita University.

The DPJ, formed in 1996, takes power for the first time as Japan struggles to emerge from the worst recession of the post-war era, against the background of a shrinking population, ballooning national debt and a welfare system creaking under the strain of record unemployment and rising poverty.

The new prime minister, Yukio Hatoyama, whose grandfather was a founder of the defeated LDP, becomes leader of the world’s second largest economy, on pledges to support families with a monthly allowance for all children of 26,000 yen ($277) and to reform Japan’s powerful bureaucracy.

The DPJ plans to pay for its manifesto, which also includes a pledge not to raise the consumption tax, by eliminating wasteful spending on huge public works projects and numerous quasi-governmental agencies and organizations.  Having portrayed itself as the party that would stand up to America, as the election drew near and victory looked certain, the DPJ backed off from some of its earlier pledges, such as ending the refueling mission that supports the U.S.-led operations in Afghanistan.

Hatoyama had also criticized Japan’s shift to U.S.-style free-market capitalism, but this was more an attack on domestic government policies than any hostility to America. Indeed Hatoyama intends to pursue a free trade agreement with the U.S., as well as one with Europe.

Ousted Prime Minister Taro Aso, whose support had dipped as low as 18 percent this year, found his image as a wealthy bon vivant detached from the suffering of ordinary people during the recession and increasingly out of step with the mood of the country.

“Aso showed the public how ignorant he was about Chinese characters, making people think he was unable to read books or newspapers, maybe only comics,” said Koyama, referring to Aso’s infamous love of manga comics.

Three LDP leaders in a row had taken office without an electoral mandate as they replaced resigning prime ministers. Aso’s two predecessors both failed to last a year.

Longtime Aso ally, former finance minister Shoichi Nakagawa, lost his constituency seat in Hokkaido. Nakagawa’s drunken performance at this year’s G8 Rome summit when he slurred his words and then fell asleep during a press conference, embarrassed the government at home and abroad.  He also has failed to get back into parliament through the proportional representation section which accounts for 180 of the 480 lower house seats.

Having finally brought the long reign of the LDP to an end, many of Japan’s citizens will be looking for signs that something will actually be different now.

“I think things will change. Even if they just cut all the wasted public works spending and use that to pay the new child support system — that will be something at least,” said Fumiko Ito, a homemaker in Tokyo who voted for the DPJ.

Those hoping for a clean break with the smoky backroom politics of the past may soon find themselves reminded of the fact that almost all of the current senior figures in the DPJ were originally LDP politicians.

Political analysts will be keeping an eye out for evidence of the power of Ichiro “The Destroyer” Ozawa, a veteran backroom bruiser and fixer who would have been assuming the role of new prime minister tonight had he not been brought down by a donations scandal this spring. During the campaign the LDP claimed that Hatoyama would be little more than a puppet while Ozawa called the shots behind the scenes. If, as expected, Ozawa doesn’t take a cabinet post, suspicions about his true role will only increase.

The DPJ is to hold discussions with the Social Democratic Party and the People’s New Party about forming a coalition, despite some major policy differences. The two parties have only 10 seats between them and the DPJ doesn’t require their cooperation to implement its legislative program, thanks to its huge majority.

The Japan Communist Party — the nation’s oldest party — which had been attracting media attention since last year because of its growing youth membership, failed to translate this growth into electoral gains, maintaining its previous figure of nine seats.