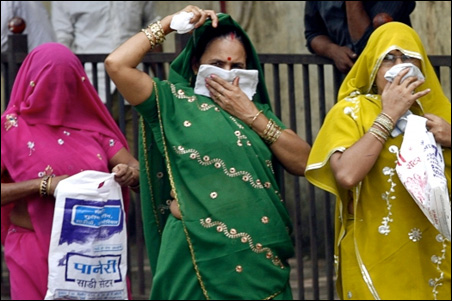 REUTERS/Punit Paranjpe
Women cover their faces with handkerchiefs as they walk outside a special ward for H1N1 influenza testing at the Kasturba Hospital in Mumbai, Aug. 9, 2009.

BANGALORE — It has all the trappings to become Bollywood’s movie of the year.  The film is directed by the talented Vishal Bharadwaj, has mesmerizing music and stars rumored off-screen couple Shahid Kapur and Priyanka Chopra.

But the grand opening of the much-awaited “Kaminey” (lowlife) has been stymied by the swine flu pandemic.

Panic has built up across India where crowded public transport systems, cinema halls, schools and shopping malls have aided in quickly transmitting the H1N1 virus.  As the infection touched thousands of Indians and the death count mounted to 18, the government pressed the alarm button.

In Mumbai, one of the world’s most densely populated cities, schools were ordered closed for a week. Multiplexes in the hub of India’s film industry were directed shut, all with good reason.  Maharashtra state, where Mumbai is located, has accounted for 14 of the 18 swine flu deaths.

There could not have been worse news for “Kaminey,” scheduled to open this weekend coinciding with India’s Independence Day.  By any measure in movie-crazy India, this is a big weekend for movie audiences.

Opening weekends typically dictate the box office buzz for a Bollywood film and account for a substantial chunk of a film’s opening week earnings.  And Mumbai, Bollywood’s most lucrative movie territory, contributes more than a third of that. “There is anxiety,” conceded Siddharth Roy-Kapur, CEO of UTV Software Communications, which is owned in part by The Walt Disney Co. and has produced “Kaminey.”  Profitable paid previews of the film have been cancelled in various cities, and the movie opening has been scaled down to a 1,200-screen release, he said.

However, “we are covered financially because the movie is insured,” Roy-Kapur said.

In Bangalore, diehard Bollywood fan Prathima Kannan, a professional bowler, said she would brave the swine flu to go a nearby movie hall to catch “Kaminey” on opening day.

“I will wear a face mask and go to the cinema,” said Kannan, “I want to watch the movie before my opinion gets colored by critics and reveiws.”

The government is at odds with itself, running the risk of raising alarm levels in the public while trying to limit the infection from reaching epidemic proportions in a crowded country.

By closing schools, colleges and multiplexes, the government was trying to imitate preventive strategies used by other countries such as Mexico to contain the spread of the disease.

Social distancing is the recommended course of action for the swine flu pandemic, said a WHO regional spokesperson who did not want to be quoted.  This was in order to give the government and health systems time to catch up.

But the shutdown only raised anxiety levels in a vast country where many people sported face masks in public places.  Drug stores ran out of supplies of masks and hoarders sold the mask which retails at 10 rupees (about $0.20) at five times the price.

For Bollywood, India’s prolific movie industry, swine flu has been the latest in a long string of crises.  A series of dud films and a prolonged battle between multiplex owners and movie producers have already made this a forgettable year for the business. Beyond the dampness surrounding the release of “Kaminey”, there is a further sense of disquiet in Bollywood over swine flu.

The filming schedule of leading filmmaker Karan Johar’s lavish 180-crew shoot for Qurbaan in Pune, a city near Mumbai, has been put off.  Pune was the first city to report a swine flu casualty.  The shoot for Bollywood heart throb Salman Khan’s Veer in Pune has also been cancelled.  Meanwhile, movie stars appeared on television sounding uneasy about the swine flu pandemic.

On the bright side for “Kaminey,” there are no big Bollywood movies scheduled to release for the next five to six weeks.  The industry is watching to see if “Kaminey” will survive the pandemic.