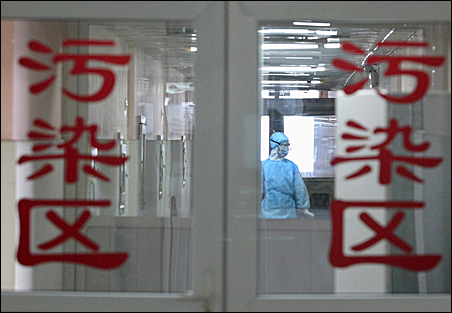 REUTERS/China Daily
A health worker wearing a protection suit is seen inside the contaminated zone at a hospital in Chengdu, Sichuan province.

Editor’s note: This is the first of a three-part series on China’s attempts to reform its sprawling and troubled health care system. Kathleen E. McLaughlin and Sharron Lovell have documented the effects on people across the country, including rural areas and urban centers.

BEIJING — As the United States is once again mired in a debate about health care reform, across the Pacific the world’s largest socialist country is trying to piece together some semblance of universal health care for its 1.3 billion citizens.

China’s health care system was once a model of low-cost, efficient delivery that served hundreds of millions of people. The system began to fall apart in the 1980s with the disbanding of the socialist economy. State-owned companies that had promised cradle-to-grave health care coverage to their employees were privatized. Often, there was nobody to pick up the pieces.

Since 1980, the percentage of personal income Chinese people spend out-of-pocket on health care has doubled. Access is often severely limited in rural areas and even major urban centers struggle with adequate funding and care. In 2006, a survey showed that nearly half of Chinese people refused to see a doctor when they fell ill.

As the system broke down, horror stories began to emerge: patients turned away from hospitals and dying because they couldn’t make large cash deposits, life savings spent on health care that is inappropriate or ineffective.

But the problem is massive and so, too, will be the solution. The health care reform effort is being rolled out in stages that will continue through 2011, beginning with a basic opt-in insurance program for hundreds of millions of rural residents.

In a groundbreaking study of China’s health care system late last year, the British medical journal, The Lancet, said inequities in the system were among its biggest problems.  Still, the report said, China also has a unique opportunity for broad reform.

“With economic boom and growing government revenues, China is unlike other countries challenged by health inequities and can afford the necessary reforms so that economic development goes hand-in-hand with improved health equity,” the journal’s researchers wrote.

Health care inequities are most glaring in rural China, where more than half the population lives, and where incomes are the lowest. As part of its reform plans, the government has vowed to build a clinic in every village. Any trip to the countryside shows the mammoth problems involved in that endeavor — especially in attracting good, qualified medical staff to remote areas that urgently need health care.

In Guizhou province, China’s poorest, many villagers in mountainous areas report never having seen a doctor. In many places, women routinely give birth at home, medications are priced out of reach and facilities can be woefully inadequate.

And while the situation in rural China often seems bleak, the problems in major cities can be just as bad. While in rural areas the care often simply isn’t available, in cities with cutting edge facilities and the best doctors a lack of cash can kill.

Take Li Wanming. In late 2006, his sister suddenly took ill with a critical heart problem. He rushed her to the emergency room of one of Beijing’s top hospitals, where, he now believes, she waited 24 hours in need of emergency surgery because he couldn’t produce enough cash to secure the operating costs. The doctors told Li his sister needed surgery, but he had to make a hefty cash deposit.  He told them he could pay half and it would take him several hours to get the rest. His sister died waiting.

Li sued the hospital. The court recently ruled against him. He wants to appeal and is hoping for a wholesale change in China’s health care system.

For Li, this is not abstract. He is an eye doctor, albeit in a lower-rung hospital, and knows exactly how the system works. His sister trusted him to find her the best care, he said, and he believes he failed her by bringing her to a hospital that did not consider her important enough to save.

Unfortunately for Li, his own connections in Beijing’s medical establishment were not enough to save his sister. But while changes to the health care system might come too late to help her, he welcomes the effort all the same.

The most important thing, he believes, is that all citizens of China are entitled to equal access to health care. Right now, that isn’t happening.