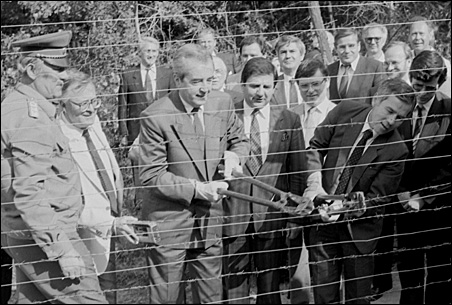 SOPRONKOHIDA, Hungary — Race north on the newly paved country lane from this Hungarian village, past cornfields and patches of woods, and you might miss the Austrian border altogether.

The old border between East and West is now just a seam in the asphalt next to a bike path crossing. There are no signs marking the spot, just a modest statue of a half-open door commemorating the historic events of Aug. 19, 1989, which helped bring down the Berlin Wall three months later.

Back then there was no missing the border, then part of the “Iron Curtain” that separated Western Europe from the Soviet-controlled East. Barbed-wire fences cut across fields under the shadows of watchtowers and a locked metal-and-timber gate blocked the dirt road, which had been barricaded since 1948. Twenty years ago today, Hungarian Border Guard Arpad Bella was standing in front of that gate in his summer uniform, pistol at his side, awaiting the arrival of a special delegation of Austrian visitors. It was an unusual event, but it was an unusual time.

Hungary had started dismantling parts of its western border fortifications that spring, sending shockwaves through the nations of the Eastern Bloc. Tens of thousands of East Germans — who could travel to Hungary without a visa — flooded into the country, hoping to find a clear path west without passing through the minefields and barbed wire separating their country from West Germany. Bella’s men had been told to be on the lookout.

Meanwhile, reformers within Hungary’s Communist Party had given local democracy activists permission to organize a symbolic event on the border — a “pan-European picnic” in which they would share food, wine and declarations of cooperation with their Austrian neighbors. With foreign press in attendance, a joint delegation would cross the border. The gate was to be locked again at 6 p.m.

It didn’t turn out that way.

A little before three, Bella saw a large mass of people approaching his side of the gate, which he initially took to be the Hungarian delegation. But people in the crowd were approaching in silence, carrying children, pets and rucksacks of belongings. They were East German tourists desperate to escape to the West. They quickened their pace as they drew closer to Bella.

“I didn’t have much time to decide what to do,” Bella recalled 20 years later. “If I tried to stop the East Germans there would be blood. If I decided not to, I would be violating my orders.”

In those moments, Bella came to a history-changing decision. “At that moment of decision I put aside the Border Guard and let my own personality come out,” he said. “These people weren’t the enemy, they were civilians without weapons, and if I tried to stop them, people — including my men — would be hurt or killed and we still wouldn’t succeed.”

His order: “Please, go through.”

Nearly 700 East Germans escaped that day, encouraging tens of thousands more to flee their country in an exodus that would ultimately prompt the East German authorities to open the Berlin Wall on Nov. 9, 1989, ending the Cold War division of Europe and, ultimately, the Soviet empire itself.

The official delegates showed up shortly thereafter, including Walburga Habsburg Douglas, archduchess of Austria and daughter of the heir to the Habsburg throne, Otto von Habsburg, who had supported the picnic. “All around me there were abandoned German Trabant cars and German-speaking people running for the border,” recalled Douglas, now a Swedish parliamentarian. “The expressions on their faces were just incredible as they got across and the border guards were just smiling.”

The mayor of the nearest Austrian village, St. Margarethen, organized food and shelter for the escapees who were later transported to West Germany, where they were entitled to citizenship. In the days afterward, the organizers of the picnic — and Hungary’s reformist prime minister, Miklos Nemeth — held their breath, waiting to see the reaction from Moscow, which had 60,000 troops in Hungary. “At that moment nobody knew what would happen,” said university professor Laszlo Magas, one of the chief organizers of the event.

But Soviet President Mikhail Gorbachev said nothing, emboldening Nemeth. On Sept. 10, 1989, his government announced that all East Germans on its territory would be allowed to travel freely to Austria. Some 60,000 fled East Germany via Hungary, prompting East Berlin to open the Berlin Wall in an effort to placate its citizens and reduce the hemorrhaging of skilled workers.

Today there are no border controls at all between Hungary, Austria and 23 other members of the Schengen Area, Europe’s customs union. Crossing the former Iron Curtain is as easy as traveling between U.S. states.

Bella, the border guard, went unpunished and after the collapse of communism was awarded a medal for his actions at Sopronkohida. “My colleagues always joke that I’m the only Border Guard officer ever given high honors for not following his orders,” he said.

The picnic that changed Europe