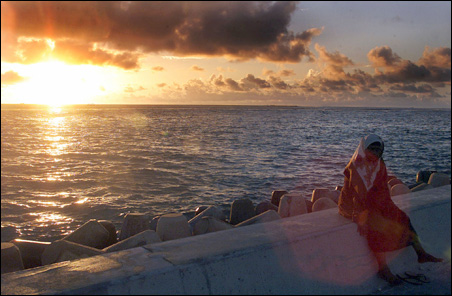 REUTERS/Anuruddha Lokuhapuarachchi
A Maldivian woman sits atop a section of a dyke built to protect the tiny island from the ravages of the sea in Male on July 12, 2001.

BRISBANE, Australia — As a teenager in the Carteret Islands, a picturesque atoll in the eastern Papua New Guinea archipelago, Ursula Rakova walked to school and church along a sandy road, passing through the center of a thriving community that produced taro, a staple food.

Thirty years on, the taro plantations of Han, Rakova’s home island, are gone — swamped by rising seas. The road, too, is under water. “Where we once walked,” she told GlobalPost, “we now have to paddle a canoe.”

Two thousand miles to the east of the Carterets, and roughly halfway between Hawaii and Australia, Tuvalu — population: 12,000 — is often billed as the first community in the southwestern Pacific Ocean likely to be devoured by the region’s rising and increasingly turbulent seas.

Tuvalu’s situation is indeed dire: Seawater and the saltwater table — the level at which underground potable water turns salty — already threaten coconut and taro farming. But according to the latest studies of the region’s changing conditions, Tuvalu won’t actually disappear for another 1,000 years, though it will become uninhabitable long before then.

GlobalPost’s Stephan Faris writes about efforts by Tuvalu to cut its carbon output, in order to shame bigger polluters — before it sinks.

Carteret islanders, meantime, are already dealing with a watery apocalypse.

The islands form a horseshoe-shaped atoll (population: 3,300) with a total area of 150 acres (about 110 American football fields) and maximum height of 1.2 meters (3.9 feet) above sea level. Much of the little land the community lives on is already awash. Islanders deal with a higher incidence of malaria as the atoll’s volcanic foundations slowly collapse, and trees and taro, coconut and banana crops surrender to ever more violent storms. When their plight began to become more desperate some 20 years ago, islanders built sea walls and planted mangroves to break the waves’ advance. “But recently,” said Rakova, “it has become evident that these measures aren’t going to work in the long run.”

Over the past six months, about 800 islanders have either fled or begun planning their families’ escape to drier land at Tinputz, on Bougainville, the largest nearby island in Papua New Guinea (PNG).

“By 2015,” said Rakova, “we’ll have to move all the rest, mainly the older ones. Most of the younger ones either have already gone or are now making plans to leave.”

The Carterets, populated about 200 years ago by settlers from Bougainville, have a largely matriarchal society: women inherit much of the land.

The NGO’s name means “riding the waves” in the local language. Their destinations are blocks of Bougainville coastal land provided by the Catholic Church.

Rakova gave up her job with the NGO alliance, Oxfam, three years ago to set up Tulele Peisa. She said, “Our whole culture is at stake. Our people, especially the older ones, don’t want to move, but there is really no alternative.” (For an account of the Carterets’ plight, check out “Ursula’s Story.”)

The islanders, said Rakova, blame people in industrialized countries for what is happening. “We don’t fully understand the science,” she admited, “but we’re angry about reports that carbon dioxide emissions may be causing climate change.”

If the wider world is indeed causing problems for the Carterets it won’t be the first time.

During the Pacific War (1941-45) fighting between U.S.-Australian forces and Japanese invaders brought much devastation. The islanders ruefully tell the story that the Carterets were once seven islands, but bombing obliterated one island, turning them into a six-island atoll. (Some sources outside the islands are more sceptical, claiming that over the years islanders have reduced their available land by using explosives to carve out new fishing areas.)

Whatever the truth, latest scientific studies by institutes in Australia, the region’s largest power, point to measurements that don’t encourage islanders who might want to stay and continue fighting the ocean’s surge. Australia’s National Tidal Center, based in Adelaide, runs the only sophisticated tidal gauges for 12 of the 14 Pacific island nations. Their measurements show that western Pacific areas nearer the equator, like the Carterets, appear to be experiencing sea-level rises of about 5 millimeters (0.2 inches) a year, compared with an average global rise of about 3 mm (0.12 inches).

Meantime, satellite altimeter readings, says the tidal center, show evidence over the past decade of what it calls pan-Pacific “slosh”: Sea-levels “have risen in the southwest Pacific and fallen in the northwest Pacific since 1992.”

In a recent report, Oxfam warns that by 2050, 150 million people may be displaced globally because of climate change, half of them in the Asia-Pacific region.

“The potential for climate displacement is especially a concern for low-lying atoll nations in Polynesia and Micronesia,” the report says. “With land areas just meters above sea level and narrow strips of land just 50-100m [160-320 feet] wide in some atolls, there is no retreat to higher ground from the ravages on the coast. The potential for forced displacement among the Pacific islands population of about 8 million people demands urgent debate.”

Certainly, the Carterets islanders are stirring the discussion. Said Rakova: “The PNG government allocated 2 million kina ($783,000) to pay for more land in Bougainville, but we have not seen one cent of this so far.

“We are more than a little worried. But above all, we’re sad. We’re losing our ancestral home, our culture, our identity, our whole life. We hope the world is listening.

As worries about climate change grow, a community in the Pacific Ocean is already dealing with the effects