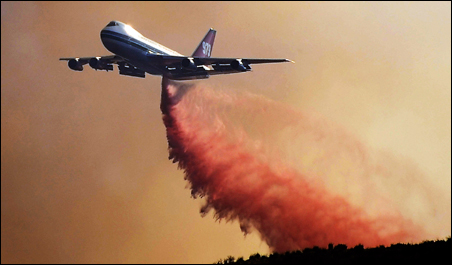 REUTERS/Gene Blevins
A Boeing 747 makes a flame-retardant drop in Acton, Calif., on Aug. 31.

The words sit uneasily on some American tongues like poison. Or worse, French.

Noxious or not (depending on your geography and point of view), the concept was the talk in global trade circles Friday as the World Trade Organization ruled that Airbus had received illegal subsidies from European governments.

Yes, folks, we’ve got a nasty fight on our hands.

Friday’s preliminary ruling is a partial victory for Boeing (and by proxy the United States), which in 2005 charged that Airbus unfairly received billions of dollars from European governments from 1970 to 2004. The WTO ruling reportedly tossed out two-thirds of those claims.

But whatever the final outcome — and this spat is expected to drag out for a very long time — the Airbus-Boeing slugfest is a big, important and very complex case (the WTO decision ran to more than 1,000 pages).

There are many good reasons to pay attention to what’s happening here:

In theory, the kerfuffle could spark a trade war between the world’s two biggest economic powers — the European Union, with a combined gross domestic product of $18.3 trillion, and the United States, where annual economic output totals $14.2 trillion.

With annual revenue of $60.9 billion, Chicago-based Boeing is one of America’s largest exporters and has the economic and political clout to match that hefty standing. Airbus, meanwhile, is a physical representation of European economic swagger and pride: a government-formed company with French, British, Spanish and German roots that employs some 57,000 Europeans.

Each year these two giants battle over one of the world’s richest economic spoils: the $600 billion global aerospace market.

So, yes, there’s a lot at stake — from the health of the critical U.S.-EU trade relationship, to the future of a tepid global economic recovery that doesn’t need trade friction right now, to the credibility of the World Trade Organization. (The Boeing-Airbus case is the biggest that Geneva’s free trade referee has yet to tackle. All eyes are on it, particularly those in China, India and Brazil, which also want a piece of this growing aerospace pie.) But this tussle is about more than political power and corporate greed. At its heart, the Boeing-Airbus dispute represents something deeper: economic philosophy. More specifically, what is the appropriate role of government in managing an economy? Should it use its considerable resources and power to help its companies, or leave it to the free market?

Those are not simple questions. The idea of government protection of industry is the third rail of economic policy and practice, and has echoed down through the ages.

In 1776, Adam Smith in “The Wealth of Nations” famously railed against government subsidies and monopolies. Smith argued that free trade, competition and choice is more efficient and leads to faster economic development and richer societies.

On the other extreme, there’s the government assistance and restrictive trade policies of Japan, South Korea and other Asian Tigers in the 1960s, ’70s and ’80s, which helped build up their industries to world-class standards (much to the chagrin of Detroit, Washington and the rest of free-trading America). These government policies sparked, well, faster economic development and richer societies.

Europe, meanwhile, has also historically taken a hands-on approach to supporting industry, particularly in a recovering post-war Europe. And while that orientation has changed in recent decades there is still a protectionist instinct in many parts of the continent (a belief that’s clearly spelled out in Boeing’s subsidies case against Airbus). To be sure, the United States is bailing out Wall Street banks and helping its auto companies, too, with billions of taxpayer dollars going to Detroit, and the $3 billion cash-for-clunkers government program helping fuel domestic auto sales. Moreover, the so-called “Buy American” clause in the government’s $787 billion economic stimulus package sparked a global outcry.

So these historic plates are shifting as the global economic meltdown plays out. But the deep philosophical currents are still there, and they will no doubt underscore the economic horse trading that will go on in Pittsburgh on Sept. 24-26, when the leaders of the G20 nations meet to hash out their latest response to the crisis.

They will, of course, be arriving in airplanes made by Boeing and Airbus.