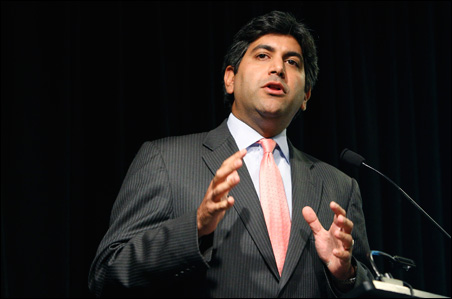 SAN FRANCISCO, Calif. — The speech began with a laugh when Aneesh Chopra, chief technology officer of the United States, fouled up his slide presentation before 400 Silicon Valley executives.

“Who’s the chief technology officer in this room,” joked Chopra, the first occupant of the office created by President Barack Obama to make the U.S. government, and the country’s  economy, more innovative.

Chopra, 37, was born in New Jersey to parents who emigrated from India. Together with his colleague, Vivek Kundra, Obama’s chief information officer, Chopra symbolizes the growing prominence of Indian-Americans in the technology realm and the role they will play in setting White House policy.

The mainly Indian-American audience at Saturday’s speech, which was sponsored by The Indus Entrepreneurs, a networking organization for Indian-Americans, welcomed him with pride.

“He is one of our own,”  said TIE president Vish Mishra, a Silicon Valley entrepreneur and venture capitalist. Mishra also quipped about the importance of Chopra’s appearance in Silicon Valley, unofficial technology capital of the United States, if not the world.

“If you’re Catholic, you’ve got to go to Rome,” Mishra said.

In his speech Chopra, who was secretary for technology in the state of Virginia before joining Obama, said the United States was in danger of losing its competitive edge in technology.

He cited a recent report titled “The Atlantic Century,” by the Information Technology and Innovation Foundation, that showed Singapore, Sweden, Luxembourg, Denmark and South Korea ahead of the United States in overall competitiveness when it came to knowledge-based industries.

More worrisome, Chopra said the United States was the worst of  40 nation and regions surveyed at adapting its policies and systems in 25 areas — from education to investment to infrastructure — to encourage innovation and competitiveness.

“Ranking dead last around these 25 innovation metrics gives us a mandate for improvement,” he said.

Chopra said Obama’s charge to him and Kundra, with whom he works closely, was to “harness the power and potential of technology and innovation to transform the nation’s economy.”

He said the federal government can exercise a tremendous influence over the direction of technology through the $150 billion a year that it invests on research and development as well as the $76 billion that government agencies spend annually on hardware and software.

Among the administration’s priorities, Chopra said Obama wants to improve and open up the  nation’s broadband infrastructure, while maintaining security; use technology to help further education; and find ways to use data processing to lower costs and improve outcomes in the medical system.

“Health care IT (information technology) happens to be the No. 1 item on my personal agenda,” he said.

In his remarks Chopra offered examples of efforts now underway to improve the delivery of government services even while the administration works toward these higher goals.

“It’s about what can we do in the here and now,” he said.

For instance, Chopra said Obama complained in August that it took too long for the Veteran’s Administration to process disability claims despite efforts over many years “by consultants out the yin yang” to expedite the process.

So Chopra said the administration has already created an online system that is enlisting suggestions from more than 12,000  VA workers — an example of a tech-inspired trend called “crowdsourcing” that is the antithesis of bureaucracy. “The president is convinced that frontline workers will figure out these things after a top-down approach has failed,” Chopra said.

Another example that resonated with his Indian-American audience was a recent Obama mandate to make the U.S. Customs and Immigration Service website more user-friendly by, for instance, enabling people to learn the status of their visa or citizenship paperwork.

“We have lived this problem,” said Chopra, telling the story of one elderly Indian man he knew who had died during the lengthy process of getting approved for immigration.

Chopra said USCIS is poised to unveil a new web-based system that will let applicants get updates about their immigration status via email, text message or online query.

“This is personal. This is real,” he said, adding, “We have to have government that works.”

Good intentions aside, it remains to be seen whether Obama’s efforts to open up and modernize the bureaucracy will yield more fruit than the “reinventing government” crusade that then Vice President Al Gore led under the Clinton administration.

Beyond his natural supporters in the Indian-American community, Chopra has fans among tech leaders who believe that the web, and the culture of involvement that it enables, can reshape what is now being called “Government 2.0.”

“Aneesh Chopra is a rock star,” web entrepreneur Tim O’Reilly blogged at the time his appointment. “He’s a brilliant, thoughtful change-maker. He knows technology. He knows government, and he knows how to put the two together to solve real problems.”