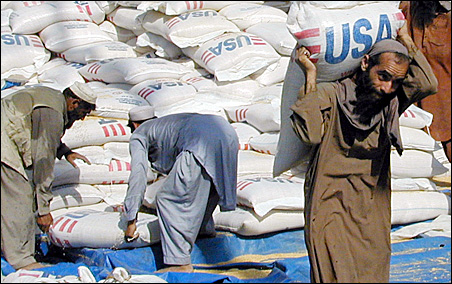 REUTERS
Workers load bags of food aid from the U.S. during food loading operations in Quetta back in 2001. USAID has recently initiated a probe into accusations that the Taliban takes its money meant for large development projects, like roads and bridges.

KABUL — The United States Agency for International Development has opened an investigation into allegations that its funds for road and bridge construction in Afghanistan are ending up in the hands of the Taliban, through a protection racket for contractors.

And House Foreign Affairs Committee member, Rep. Bill Delahunt (D-Mass.) vowed to hold hearings on the issue in the fall, saying: “The idea that American taxpayer dollars are ending up with the Taliban is a case for grave concern.”

U.S. officials confirmed that the preliminary investigation and the proposed hearings were sparked by a GlobalPost special report on the funding of the Taliban last month that uncovered a process that has been an open secret in Afghanistan for years among those in international aid organizations.

The report exposed that the Taliban takes a percentage of the billions of dollars in aid from U.S. and other international coalition members that goes to large organizations and their subcontractors for development projects, in exchange for protection in remote areas controlled by the insurgency.

“We are looking into this. We are always interested in fraud, waste and abuse,” said Dona Dinkler, the chief of staff for congressional affairs at USAID’s Office of Inspector General in Washington, D.C.

But, she added: “It’s a real hard thing to prove. Who is going to survive to testify about that?  That is our challenge. But that doesn’t mean we stop trying. We want to get to the bottom of it.”

The USAID probe is underway in tandem with an inquiry by the U.S. House of Representatives’ Foreign Affairs Committee, whose members have raised concerns in recent years about fraud and abuse in the $7.5 billion in funds marked for Afghanistan between 2002 and this year.

“It’s our intention this fall to hold public hearings on it. We will pursue this with vigor,” said committee member Delahunt.

Delahunt said the allegations made in the story reveal a lack of oversight of U.S. government spending in Afghanistan that he described as a legacy of the previous administration in Washington. He said more resources were needed to be brought to routing out this kind of corruption.

USAID’s Inspector General has only one investigator in Afghanistan and two auditors tracking the billions of tax payers’ dollars that go to NGOs in that troubled country.

“They want to know what [we are] going to do about this,” said an official at the U.S. Embassy in Kabul, adding that the goal of the probe at this point is to determine how extensive the problem is, and how it can be tracked.

As part of a special report called “Life, Death and the Taliban,” GlobalPost traced a web of financial connections between major international contractors and the Taliban in which the insurgents provide protection — largely from themselves — in return for a healthy cut of the proceeds. One source, with direct knowledge of such payments, estimated the Taliban can take upwards of 20 percent from many contracts awarded in unstable areas, which would include about half of the country.

When the money is not paid out, then bridges get blown up, engineers get kidnapped and projects tend to stall, according to sources quoted in the story.

“It’s organized crime,” sighed the embassy official, who spoke on the condition that his name would not be used. “It’s insidious.”

It is also going to be very difficult to establish, let alone control. Most of the monetary  transactions take place at a sub-contractor level, invisible to balance sheets or oversight committees. Any records that are kept are not likely to make their way into the U.S. government accounting system.

As GlobalPost reported, the Taliban allegedly receives kickbacks from almost every major contract that comes into the country. The arrangements are at times highly formalized and, as GlobalPost spelled out, the Taliban actually keeps an office in Kabul to review major deals, determine percentages and conduct negotiations. The arrangements are often more personal, as when a local supplier pays off a small-time Taliban commander to allow free passage of goods through his patch of insurgency-controlled terrain.

Precise amounts are almost impossible to pin down, but it is, according to those knowledgeable of the process, a conservative estimate that the amount going to the Taliban is in the tens of millions of dollars a year. If the allegation that the Taliban takes 20 percent off big contracts is true, it is possible the Taliban is receiving as much money from the billions of dollars in assistance funds as it does from what traditionally has been its leading source of income: drugs.

With the poppy crop reported to be down this year in Afghanistan and the Afghan and U.S. government boasting of successful interdiction of the crop which fuels what the U.N. has estimated in the past to be a $4 billion a year heroin trade in Afghanistan, U.S. intelligence officials say the Taliban is seeking other sources of funding.

U.S. Special Envoy Richard Holbrooke has recently asked the Treasury Department to look into the matter of Taliban funding, and has stated publicly that opium and heroin most likely account for far less of the Taliban budget than had previously been thought.

In Afghanistan — the world’s fifth most corrupt government on the Transparency International index — few would raise an eyebrow at graft. Contracts in the relatively stable north of Afghanistan are subject to just as many kickbacks as in Helmand or Kandahar; the difference, according to the embassy official, is the end recipient and the use to which they put the proceeds.

“Warlords take the money (in northern Afghanistan),” the source said. “But they are not using it to buy guns to kill our soldiers.” As the largest international donor, the United States is the major source of such funding, but it is by no means the only one. In an upcoming article, Time magazine outlines similar types of pay-offs to the Taliban in Kunduz, in northern Afghanistan, which is now experiencing a major increase in insurgent activity. The contracts belonged to GTZ, a German aid organization, but the procedures were very much the same as with USAID-funded projects.

With the practice so widespread, it is a wonder to many, including USAID’s own internal sources, how it has taken so long for it to come to light. The problem, say longtime observers, is partially the fortress in which USAID, the U.S. embassy and other international aid organizations live and work.

“[These people] really had very little idea of how Afghanistan operates,” said a USAID contractor who spent several weeks in Helmand province. “[They] could have as easily been working in an office in Washington as Lashkar Gah. Although some of them had been there for three years, they had had almost no contact with Afghans except for the cooks and cleaners. So, they have no ears to the ground.”

(GlobalPost’s C.M. Sennott contributed to this story from Boston.)