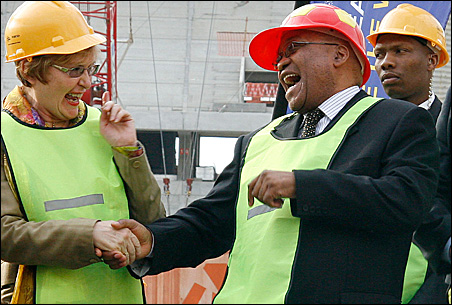 REUTERS/Mark Wessels
South African President Jacob Zuma laughs with opposition Democratic Alliance leader Helen Zille during a visit to Green Point stadium in Cape Town in June. Zille is one of many whites who play a prominent role in South Africa’s politics.

JOHANNESBURG, South Africa — Brandon Huntley was exultant when he first won a ruling that granted him refugee status in Canada.

“Look for me in tomorrow’s Ottawa Sun people, lookout I’m a celebrity!” he wrote on his Facebook site.

But he quickly deleted the comment and now faces a backlash that could force him back to South Africa. Under heavy pressure from the South African government, Canada has said it will ask its Federal Court to review the controversial decision that granted Huntley refugee status on the grounds that as a white man he was persecuted by black criminals in his home country.

If Huntley is sent back to South Africa he will find a hostile media and strong criticism from mainstream political leaders.

“Our anger is wasted on such a numbskull and his sympathetic party of simpletons,” said an editorial in the Sowetan. “When people display such shocking levels of ignorance as Huntley and the Canadian refugees board have, they deserve our pity, not our anger.”

Nor does South Africa’s main opposition party, with widespread white support, have any time for Huntley. “If he’s not prepared to contribute to change and opts to live abroad, good luck to him, we have no support for his cause,” Melany Kahn from the Democratic Alliance told Johannesburg’s The Times.

Huntley, 31, who grew up in Cape Town and first worked in Canada as a carnival attendant, told the refugee board that he was attacked seven times in South Africa, including three stabbings. He said he was called a “white dog” and a “settler” by black assailants during these attempted robberies and muggings, although he didn’t report any of the crimes to police.

Canadian refugee tribunal chairman William Davis ruled that Huntley, as a white person, “would stand out like a sore thumb due to his color in any part of the country.” This is what strikes so many South Africans as absurd as more than 5 million whites live in South Africa, making up more than 9 percent of the total population, according to Statistics South Africa.

Davis also said that Huntley had given “convincing proof” of the South African government’s “inability or unwillingness to protect him.”

But South Africans admit that, the issue of race aside, Huntley’s case underlines the country’s significant crime problem and negative international perceptions of South Africa less than a year before it hosts the FIFA World Cup.

Crime affects all South Africans and whites are not specific targets, said the chairman of the South African Jewish Board of Deputies Zev Krengel to AFP. “If anything, black South Africans are more vulnerable due to the sad historical reality of higher poverty in their communities,” he said.

Bheki Cele, South Africa’s police commissioner, also disagreed that race played a role in crime in South Africa, saying that criminals “look at what you have, rather than looking at your face.”

But in criticizing Canada’s ruling, Cele highlighted the extent of the crime problem: even the police commissioner has been victim.

“My house was broken into and some stuff was taken … and I remain black. Surely, my house was never broken into because I am black,” Cele told a Southern African Regional Police Chiefs Cooperation Organisation meeting in Johannesburg.

The ANC, while strongly condemning Canada’s decision, acknowledged that more must be done to fight crime in South Africa and highlighted the well-publicized steps taken by President Jacob Zuma, including a planned expansion of the country’s police service.

The decision by Canada’s refugee board, which operates at arm’s length from the government, has led to high-level talks between the two countries.  South Africa had been urging the Canadian government to undertake a review of the decision granting Huntley refugee status, Deputy Foreign Affairs Minister Sue van der Merwe told parliament. Last week Canada’s Conservative government said that it will launch a court challenge of the refugee boards’ decision.

In a brief comment this week to The Star, a Johannesburg daily newspaper, Huntley said he would not discuss the case out of fear that his family, still living in South Africa, could be targeted. But he felt that by claiming refugee status in Canada, he had brought South Africa’s problems to the forefront.