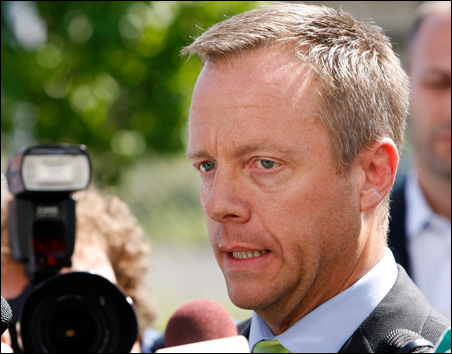 REUTERS/Mike Cassese
Michael Bryant, the former attorney general of Ontario’s Liberal government, speaks to reporters outside a police station after being charged with criminal negligence causing death in Toronto, Sept. 1, 2009.

TORONTO, Canada — Road rage incidents between cyclists and drivers are usually mismatched affairs. The difference in metal bulk obviously puts cyclists at a disadvantage. But the clash that became the talk of Toronto last week was made uneven by much more.

The spectacular confrontation — and resulting death — brought together characters from opposite sides of the tracks in downtown Toronto.

Driving the car, a black Saab convertible, was Michael Bryant, once the powerful attorney general of Ontario, a 43-year-old Harvard scholar touted as a future premier of the province.

On the bicycle was Darcy Allen Sheppard, 33, an aboriginal bike courier removed from the care of his alcoholic mother at the age of 4. Years later, he too struggled with alcoholism and substance abuse. Along the way he fathered four children.

Fate, or tragic coincidence, joined the two on Monday, Aug. 31, at about 9:50 pm, on Bloor St. W. — one of the most exclusive shopping strips in the country, where Gucci, Prada, Hermes, Louis Vuitton and other luxury brands have stores.

Bryant was with his 42-year-old wife, a leading entertainment lawyer. They had just finished celebrating their 12th wedding anniversary in strikingly modest fashion, according to the Toronto Star newspaper: two shawarmas and two iced teas, for a grand total of $15, at a nearby fast food joint. Sheppard’s previous moments were somewhat more agitated. He had tried unsuccessfully to get into his girlfriend’s apartment. Her roommate says Sheppard was drunk. Police were called. The women begged police to drive Sheppard home but officers put him back on his bike and ordered him away.

How Sheppard and Bryant’s worlds collided is unclear. Police describe it as a “minor collision.” What witnesses are clearer about is that at one point Sheppard, unhurt but angry, slammed his bag down on Bryant’s hood.

Next came a scene out of a Hollywood action film: After a sharp exchange of words, Bryant, still sitting inside the convertible, pulled away. Witnesses say Sheppard chased the car and grabbed hold of the driver’s side.

One witness described seeing sparks coming from Sheppard’s cycling shoes as the car dragged him along the asphalt. Then the car veered across the opposite lanes, past oncoming traffic, and sideswiped trees and newspaper boxes on the sidewalk. Witnesses said it looked like Bryant was trying to swat Sheppard off his car with the obstacles.


Sheppard lost his grip when the car hit a mailbox, and he fell under the car’s rear wheels. Bryant continued driving for a short distance, turned off Bloor Street, entered a hotel parking lot and called the police.

Sheppard was bleeding from his mouth and nose when an ambulance rushed him to a hospital, where he died. Bryant was taken into police custody. He was charged with criminal negligence causing death and dangerous driving of a motor vehicle causing death

Word that Bryant was the man behind the wheel didn’t hit the media until the next morning. Comparisons were immediately made to the late Ted Kennedy and Chappaquiddick. Some columnists sought a literary reference, citing a resemblance to Sherman McCoy, the high-rolling bond trader in Tom Wolfe’s “Bonfire of the Vanities.”

Bryant, the flashy attorney general who banned pit bulls and cracked down on drivers racing on city streets and highways, had recently left politics. But few believed politics had seen the last of him. Now, his ambitions seemed finished. Cyclists were already clogging Bloor Street in protest, chanting “Murderer.” And then, as if by magic, the scene started to change. The magicians came in the guise of public relations officials from Navigator Limited, one of Canada’s leading firms. Its previous big name client was former prime minister Brian Mulroney, speaking for him in the latest chapter of a decade old affair involving suspicions of kickbacks.

It’s unclear when Bryant hired Navigator for the job. But it’s a good bet they were already at the helm when a suit and tie arrived at the police station for Bryant. He was released from custody Tuesday afternoon, clean and pressed.

Shaken, he read a brief statement to a crowd of journalists, expressing his “deepest condolences to the family of Mr. Sheppard.” He then professed his innocence in a letter of resignation to Invest Toronto, the municipal agency he headed for $300,000 a year.

Some suspected preferential treatment, noting police didn’t give Bryant a breathalyzer test the night of the incident. On Wednesday, an unnamed source told the Toronto Star of Bryant’s alcohol-free dinner of shawarmas.

By Thursday, CBC TV was reporting that police were investigating the possibility that Sheppard had grabbed Bryant’s steering wheel during the death ride. Other reports hinted Sheppard may have tried to put Bryant in a headlock.

By the end of the week there was no shortage of lawyers giving interviews to say Bryant had a good case of self-defense and a strong chance of being found innocent of the charges.

He still faces a trial. But in the court of public opinion, Bryant found himself enjoying the benefit of doubt within days — with a little help from the slick folks at Navigator.

Sheppard’s family, meanwhile, are flying his body back to Edmonton, the western Canadian city where he was raised, for a traditional aboriginal funeral.