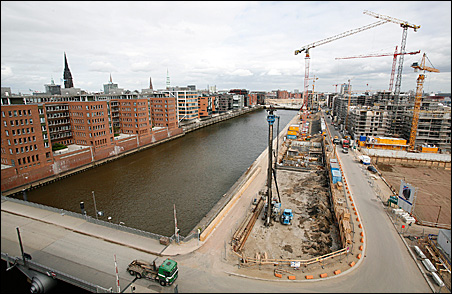 REUTERS/Christian Charisius
Rising on Hamburg’s abandoned old harbor is the biggest development project of its kind in Europe, a carefully managed experiment in modern living that officials hope will help turn their city into a cultural and architectural magnet to rival Barcelona.

HAMBURG, Germany — Into a skyline dominated by the cranes loading and unloading the thousands of tons of goods that pass through its port each day, Hamburg is erecting an ambitious concert complex topped by an undulating clear glass roof.

The projected cost of Elbphilharmonie has tripled in recent months to 323 million euros, roughly half a billion dollars, but project officials have staunchly defended the expense. The complex, they say, is more than an arts venue: It will give the city a fresh identity and help unite what is one of Germany’s most socially divided populations.

“This is a segregated city with completely different worlds from more slum-like parts to more suburban settings,” said Elbphilharmonie’s artistic director, Christoph Lieben-Suetter. “This [building] is exactly what is needed here: a bit of grand craziness.”

The complex, which is scheduled to open in 2012, will tower 300 feet atop a huge triangular-shaped warehouse on the waterfront that dates from the 17th century. The new structure will be all glass with a roof of glass waves designed by renowned architectural firm Herzog and de Meuron, which also designed the distinctive “bird’s nest” Olympic stadium in Beijing.

Hamburg is one of Germany’s wealthiest cities but for centuries has been run largely by merchants who have “tended to think about the bottom line,” Lieben-Suetter said. “Hamburg does not have its Eiffel Tower, its Bilboa Museum or its Guggenheim.”

The port, the second largest in Europe, is set on the Elbe River and its tributaries, creating isolated pockets that are mostly home to immigrant populations from Eastern Europe, Turkey and Afghanistan. One such enclave, Harburg, is where the extremist Mohamed Atta and the so-called Hamburg Cell planned the Sept. 11, 2001, attacks.  Critics of the Elbphilharmonie say the money going into the complex would be better spent on upgrading social services and infrastructure in poor neighborhoods. Just three short train stops from the complex, across the river in the mostly poor immigrant enclave of Wilhelmsburg, buildings are run down and many unemployed people spend their days on the street, drinking.

“Even though Wilhelmsburg is only two kilometers from the Elbphilharmonie it’s a disconnected part of town,” said Martin Bialluch a representative for the opposition left-wing party in Hamburg. “People here are socially marginalized,” he added. “For them the Elbphilharmonie doesn’t change anything in their lives except that the few of them that have a job know where their tax money goes.”

A Turkish woman in Wilhelmsburg who gave her name as Misharef said she had not even heard of the Elbphilharmonie. “All I know is that life here is getting harder,” she said.

The Elbphilharmonie, which will contain three concert halls plus a 250-room hotel, luxury condominiums and a giant parking garage, is one part of a larger urban planning project, called HafenCity, to convert hundreds of warehouses in Hamburg’s old port into luxury apartments, offices and shops. Construction on the project started in 1989 and will continue through 2015. City officials say it is currently the biggest construction site in all Europe.

Hamburg already has a rich musical tradition with several orchestras and an opera company. It is where composer George Frideric Handel started his career some 300 years ago, playing violin and harpsichord for an orchestra. Still the city is not considered one of the world’s classical music capitals, like Vienna, London or New York. The Elbphilharmonie could help change that. “We expect that with more concerts taking place musicians will flock to the city,” said Eduard Schwen, who builds string instruments at the G. Winterling workshop in Hamburg’s old town. “We hope there will be more and more orders for our instruments,” he added.

Still many Hamburgers are outraged at the recent announcement that with the need for added facilities and unexpected construction problems the cost of the complex would increase three-fold. But Elbphilharmonie artistic director Lieben-Suetter brushed aside the complaints, saying the cost is the price one pays for having a unique landmark.

“It’s what happens whenever you try to build a world wonder that has never been built before, using new materials in new ways,” he said. “It’s the same wherever you go — from the pyramids to the Sydney Opera House — it’s very difficult to keep those kind of special projects in tight budgets.”