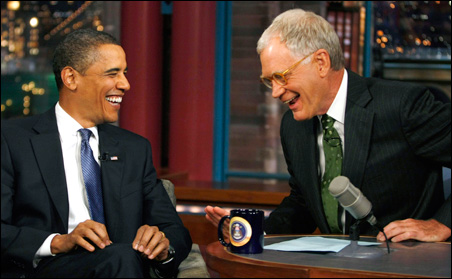 REUTERS/Kevin Lamarque
President Barack Obama laughs during the taping on his guest appearance on the “Late Show with David Letterman” show in New York, September 21, 2009.

BOSTON — If you’re a foreign policy junkie, this is your week.

Even late night talk show host David Letterman understood that foreign policy and the global economy are the things to focus on with President Barack Obama.

It’s an extraordinary week for the president as he backpedals after a leak of a report calling for more U.S. troops in Afghanistan Monday, pulls together Israeli-Palestinian peace talks Tuesday, addresses the U.N. General Assembly in New York Wednesday,  and heads off to the Group of 20 summit in Pittsburgh Thursday to, as he put it, “get the global economy back on track.”

It seems the president is everywhere, making the historic first appearance for a president on CBS’ “Late Show with David Letterman” just one day after appearing on the ABC, NBC, CBS and CNN Sunday talk shows.

After a fair bit of chatter, a few laughs, a crack about President George W. Bush and a lot of talk about a heart-shaped potato from a woman in the audience, Letterman was impressively on point in his questions.

He asked first about the global economy and the upcoming G20 gathering.

“We’re not through the woods yet,” the president said.

But he added to strong applause, “We’re going to come back stronger than before.”

And then CBS went on to paying the bills with a commercial break. After the return, Letterman asked about Afghanistan and whether the president would call for an increase in troops as a report by Gen. Stanley McChrystal called for in a document leaked to the Washington Post Monday.

“Afghanistan is a real difficult situation,” Obama said, his face shifting from a broad smile to a somber expression.

The words and the posture of Obama on this issue revealed a discernable shift in strategy, a distinct stepping away from the ledge of conducting a “surge” of troops in Afghanistan which many military analysts and Afghan experts see as perilous.

“The country is weary of the war. The Afghan people are frustrated that they haven’t seen more concrete improvements in their own lives,” Obama added.

“What I’m trying to do at this point is to make sure that both on the military front on the diplomatic front on the civilian front, training Afghan military and police that, on all these elements, that we’ve got a coherent strategy that can work.”

Obama also said the responsibility of sending American troops into harms way weighed on his shoulders every day.

“The most important duty I’ve got is before I send some young man and woman in uniform over there and I’m answerable to their parents that if they don’t come back I’ve got to write a letter to them saying that their child has sacrificed on behalf of America. Before I make those decisions,  I’ve got to make sure that the policy in place is worthy of their sacrifice,” the president said.

That was followed by applause.

Asked about troops increases, he said, “That’s something that we are going to work through systematically in the coming weeks and months. We’re not going to make a decision about any further troop deployments until we know what exactly is our strategy … I’m going to be asking some very hard questions.”

And Obama clearly wanted to talk tough on this outing, saying,”What we can’t lose sight of, and the reason we went there in the first place is to target a group of extremists.”

” My central objective is that we take those folks out,” he added with the audience coming in on cue with more applause. The show was taped, which is a good thing because Obama’s going to need all the sleep he can get when he opens up talks on the Israeli-Palestinian conflict. He’ll also need a bottle of aspirin.

The three leaders are expected to gather on the sidelines of the United Nations General Assembly. And what does Obama say to Netanyahu who continues the expansion of Jewish settlements despite a call by the Obama administration to stop the construction of homes in the occupied Palestinian territories? And Abbas will continue to assert the Palestinian claim that the peace talks need to pick up where previous Israeli administrations left off, a non-starter for Netanyahu.

When he’s done with that, the president has to deliver an address to the General Assembly. And with Iranian President Ahmadinejad in town, Obama and his team will be trying very hard to make sure their paths do not cross.

The Iranian president and his questionnable legitimacy given the contested elections in June and the street protests they produced provide Obama with an uncomfortable parallel between Ahmadinejad and Afghan President Hamid Karzai. After all, the elections in Afghanistan were far from free and fair and Karzai’s legitimacy is definitely in question.

Another awkward moment will come when he lands in Pittsburgh and has to face the leaders of so many of the countries that make up the U.S.-led coalition in Afghanistan. Clearly, they are not signing up to send more troops. In fact, several of the key countries, including Canada, Italy and the United Kingdom, are seriously questioning their involvement in Afghanistan.

It won’t necessarily be apparent this week, but it is true that all of these issues — Israel-Palestine, Afghanistan and Iran — are interlocking pieces of a larger puzzle in the Muslim world and they will all have to be solved in coordination, like a Rubik’s cube.

Obama’s greatest strength going into these international gatherings is his strong belief in multilateralism — a profound belief in the international institutions like the U.N. and the G20 as forums for working together to confront global issues from climate change to terrorism.

That belief in multilateralism will allow Obama to stand out this week in stark comparison to President George W. Bush and his contempt for multilateralism and his misguided faith in a unilateral approach that failed at a time when the world needed more than ever to work together.

Obama gets it. And we all get an extraordinary chance this week to see the president re-engage with the world.